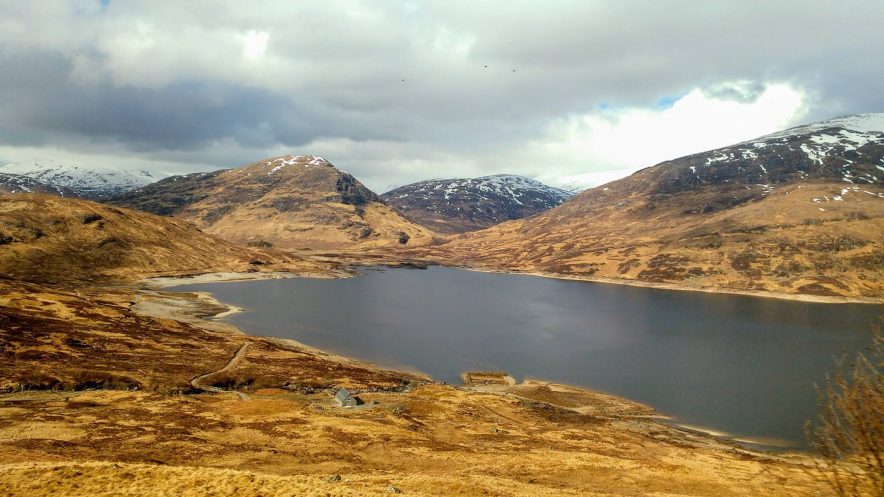 Recounting the experience of travelling by train through the Scottish Highlands. An artist’s dream!

Five and a half hours on a train through rugged mountains, thick pine forest and uninhabited moors. The West Highland Railway Line seemed to promise a much-needed mental and physical detour. So tempting was this train ride from Glasgow to Mallaig, that I booked a return journey on the same route for the very next day. It seemed reasonable to want to experience the journey both ways. A full eleven hours!

I convinced my long-suffering partner to come along with me, thrilled when he grunted out an affirmative. At Glasgow Queen Street, the train, in dark blue and yellow livery, awaited us. I was satisfied to find that the inside of the train was worn and rustic, a sign that the vehicle had accomplished some rough and long journeys. A few backpackers and hikers sat here and there, leaving plenty of seats empty. We sat by one of the enormous windows and prepared to drink in the views.

It didn’t take long to leave the buildings and telegraph poles of Glasgow city behind. For the first half of the journey, Glasgow’s seagulls seemed to follow us, gliding above River Clyde. We went past the Singer railway station, which was built over a hundred years ago to serve the sewing machine factory there.

Shortly after Dumbarton station, we went through a tunnel, that opened into a gorgeous view of steep mountains easing into blue waters. Very much like falling through a rabbit hole! To my left, I saw pine trees silhouetted in black against the saturated sky. On the other side, Gare Loch glistened beneath brown mountains, whose peaks were half-hidden by the clouds.

This was a theatrical experience. It was May, and the snow was melting in large streaks of liquid white, leaking down the slopes like a vanilla ice-cream cone on a hot day. We travelled beside several lochs big and small: Loch Long featured translucent ripples on which the sunshine danced; Loch Lomond’s undisturbed waters offered an opaque, clear mirror. It took a while for the eye to get adjusted to this unusual colour palette of greys and greens and browns: the Highland’s own Oil Colour Collection.

We went past Arrochar and Tarbet, continuing upwards to Ardlui. Crianlarich, a small village with a bright green Londis clearly visible from the train, was where the train split into two. Some coaches went to Oban via Lower Tyndrum, and some went to Fort William and Mallaig via Upper Tyndrum. Strangely enough, Tyndrum is one the smallest villages in the UK that is served by two stations. (According to the 2011 censes, less than 200 people lived there!) Before we reached Upper Tyndrum, the land, which had so far been sparse, suddenly seemed to sprout a green mass of thick vegetation on either side. As we moved on, the single-ridge mountain of Beinn Bhreac-liath stood towering over the land like an imposing plateau, the snow on top spilling over like a tablecloth.

Between Upper Tyndrum and the Bridge of Orchy lies the famous horseshoe curve, which loops around three mountains (the railway engineers didn’t have the money to build a viaduct that would go across the valley). It was quite thrilling to be able to see the tracks wind themselves around the foot of the massive hills. The Bridge of Orchy station was quiet and unassuming but, to my surprise, some of my co-passengers got off here. I then learned that the old station building now serves as a bunkhouse for hikers and walkers in the area. I made a mental note to go back and stay there one day!

As we started to approach Rannoch Moor, I spotted a group of wild deer running across the plain. It’s a sight that will stay with me forever, these animals bounding with wild abandon across a land that is likely to stay inaccessible and untouched for some time to come.

Rannoch Moor is a startlingly barren and boggy piece of land. Little rivulets break up the land mass, and light sparkles in the water-filled cracks. I spotted two mallards, their brilliant green heads an almost absurd contrast to the rest of the landscape. Clumps of pine huddled together, as though seeking safety in numbers in this desolate landscape. The snow at the top of the peaks was such a bright white that it almost hurt the eyes: giant swish-swashes of bold brush.

We head to Corrour, Britain’s highest railway station and one of the remotest parts of the country. Earthy tones here: swathes of burnt umber, sienna and beige cover the canvas. For a little relief, the blue of Lake Ossian peaked out from behind thick conifers. For miles around, there didn’t seem to be a soul.

We now seemed to be at a height, overlooking the valley below us. Beside Loch Trieg, a muddy path lead to a grey building. The painter’s afterthought, perhaps: of course there had to be a lake-side house with a winding road.  What an incongruity, this man-made construction, in the otherwise natural, naked setting.

The bit from Corrour to Tulloch was possibly my favourite part of the journey. Loch Treig hugged the shoreline. As we worked our way towards Roy Brige and Spean Bridge, comforting shades of green started to reappear, easy on the eyes after the almost Gothic theme of Rannoch moor. The land grew fertile. Waterfalls cascaded over the mountainsides. Carpets of grassy meadows covered the valleys. River Spean looked like a great spot for white water rafting, its waters gushing over rocks. We reached Fort William, where many hikers got off the train. While serving as an entry point for several treks, this town is also the starting point of the hike to Ben Nevis, the highest mountain in the UK.

In Loch Eilt, I spotted a small islet sporting a group of trees. Even from so far away, I could clearly see the branches of the tall, handsome Scots pines bearing their broccoli-like tufts. Hmmm… a dry brush here perhaps, the paint thick.

Suddenly, there was a lot of frenzied activity. Everyone brought out their cameras and crowded at the windows on the left. Clearly something big was coming up! The train slowed down considerably as we approached the Glennfinnan viaduct, of Harry Potter fame. You could see the engine make its slow turn around the viaduct, over the tall, graceful arches. It was a sight worth seeing, but marred by everyone at the window with mobile phones and cameras. Trees in different stages of leaf-burst in the foreground introduced a lake (Loch Shiel), nestled in between rugged, lilac-blue mountains. To the left lay a patch of football ground in velvet green, beside a meadow that looked ready to produce  wildflowers. Look, some brighter colours to add to our Highland Railways Artist Palette.

A group of hikers in the valley stopped to look at us. My eyes zoomed in to find a kid wearing a blue jacket waving: I enthusiastically waved back from behind the window. The train stopped for a bit to allow everyone to capture Insta-worthy photos, while I frantically tried to embed the image onto my brain.

The journey onwards visually softened, as the mountains became fewer and smaller. Browns became blues, and the sea and sky seemed to merge in places, the horizon invisible. At Arisaig, the view was forgiving and welcoming: a wide, calm sea. It was almost like the topography grew tired of the ups and downs and wanted something level, peaceful. Yachts dotted the waters, and the silvery beaches of Morar shone. The sea took on more and more colour as we got closer to our final stop. Mallaig was as picturesque as it had sounded: a charming little fishing village with a sky full of gulls. The train came to a halt. It was now time to bring out the Scottish Seaside Watercolour Set.

If you’re interested in exploring the Highlands, Walk Highlands is a great place for resources.

Also read: Train journey of a lifetime: 42 hours on the Konkan Railway

One Comment on “Window seat view: Taking a train through the Scottish Highlands”