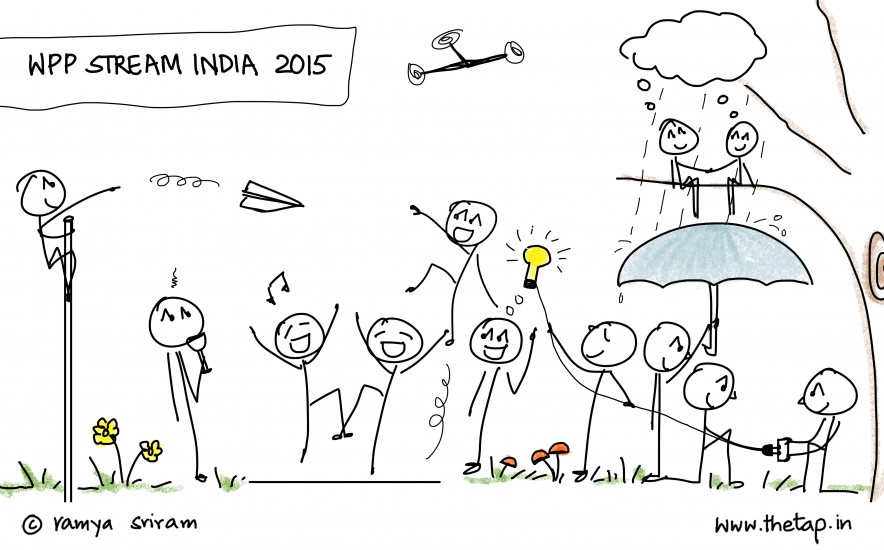 (I was a Young Star awardee and an IGNITE Talks speaker at WPP Stream India 2015, Jaipur.)

Having been drawing for most of my life, I find it easier to sometimes think in pictures than in words. I’m always looking for material to put into my frames, and WPP Stream India 2015 provided the perfect fodder for it.

Stream, an (un)conference bringing together media, technology and business leaders, excited me firstly in its very unstructure. To a mind that embraces free spaces, there is nothing more exciting that having no rules to obey, no box to be boxed into and no list of things to frantically do.

In the three days I spent at the venue, Fairmont Hotel, Jaipur, I saw the place transform itself into a playground. Excited Streamers—including media professionals, journalists, digital mavericks, technology geeks, advertising gurus, entrepreneurs—piled on to the venue like children on a picnic.

Discussion topics were crowdsourced and written in slots on the whiteboard every morning. People grouped at the board every hour, picking which discussion to participate in next, much like a choose-your-own-adventure game. Groups sprawled out on the grass, tossing ideas that were dissected, shaped and chiselled every time they changed hands. It was like an empty page had sprung to life with characters leaping across frames and swapping stories. Everyone had a different perspective and brought something of value to the page, as the story took shape.

Drones circulated above us, chai was handed out periodically in kulhads and the sun saw people growing more animated as the morning haze cleared. In the evening, as twilight grew, wine started flowing freely and we started to meander about and mingle, introducing ourselves with the other characters in the story. I sensed that everyone around me was relieved to be away from their cubicle lives and were embracing this break wholeheartedly.

Those of us who dragged ourselves to the ‘Health and Wellness’ area in the early morning chill were rewarded unexpectedly with prizes after sessions of Dog and the Bone, Tug of War, Sack Races, etc.  As I stood there grinning stupidly like a child who’d just been handed cotton candy, I realised this was the spirit of Stream – to get everyone to participate.

Of all the events that were held, my favourite was the Ignite Talks – a four-minute talk during which people spoke of their ideas and interests. While some spoke about how social media has affected Indian lives, others addressed real-world challenges. The passion with which the speakers addressed the audience sparked much inspiration in the room. The Pitch brought together people to find a solution to a social problem. The Tech Lab was full of curious people tinkering with robotic equipment, testing and trying out gadgets. The workshops, which included one on storytelling and another on sonic branding, saw packed rooms of people sitting on bean bags, leaning forward. Music (the Stream Band) and food (Midnight Cooking Madness) – two things that people unanimously love and bond over– were cleverly packed into this conference.

All this against nights of partying, sharing, networking and minimal sleep.

But Stream was not only about having a good time. It was about having a good time alongside a great deal of learning. It was about people and organisations eager to make a difference, it was about leveraging the power of technology to create something meaningful for brands, consumers and the world at large. I’ve always believed that so much happens through conversations and experiences that are shared, and Stream seemed to birth an orchard of collaborations. And of course, this convention-defying event delighted the cartoonist in me. Translating the experience onto paper would require life to be drawn into every line.

In a story, all the characters have a role to play, however small or big. At the end of the conference, the names of the events were called out and their respective participants made to stand up. At the end of the session, there was nobody sitting down. The sight of everyone standing and cheering reminded me of the last page of an Asterix comic, where all the villagers come together in the celebratory, open-air banquet. And then I realised what the true spirit of Stream was – to get everyone to participate. 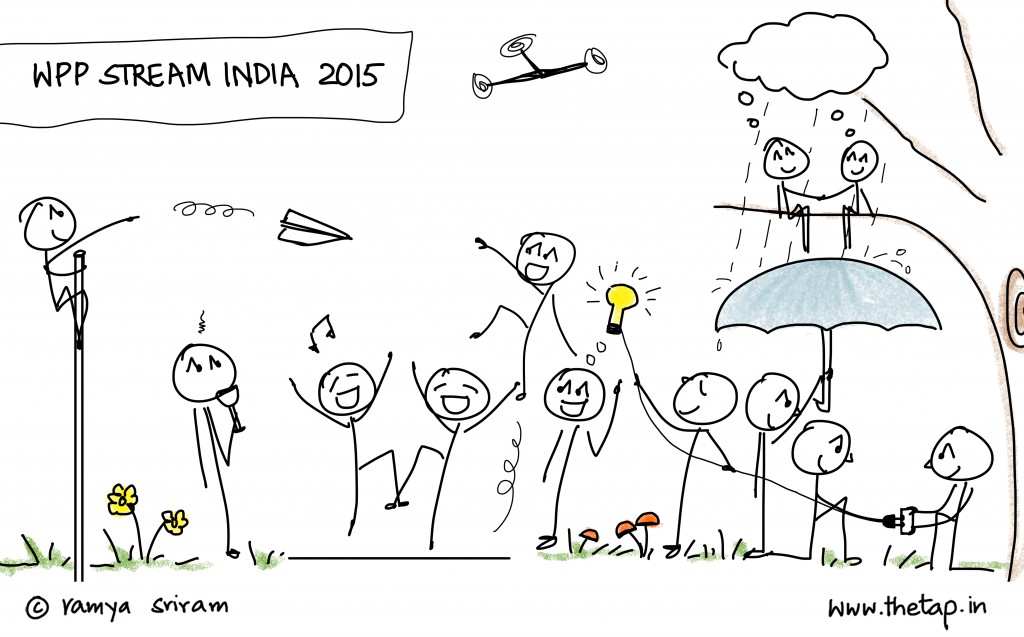