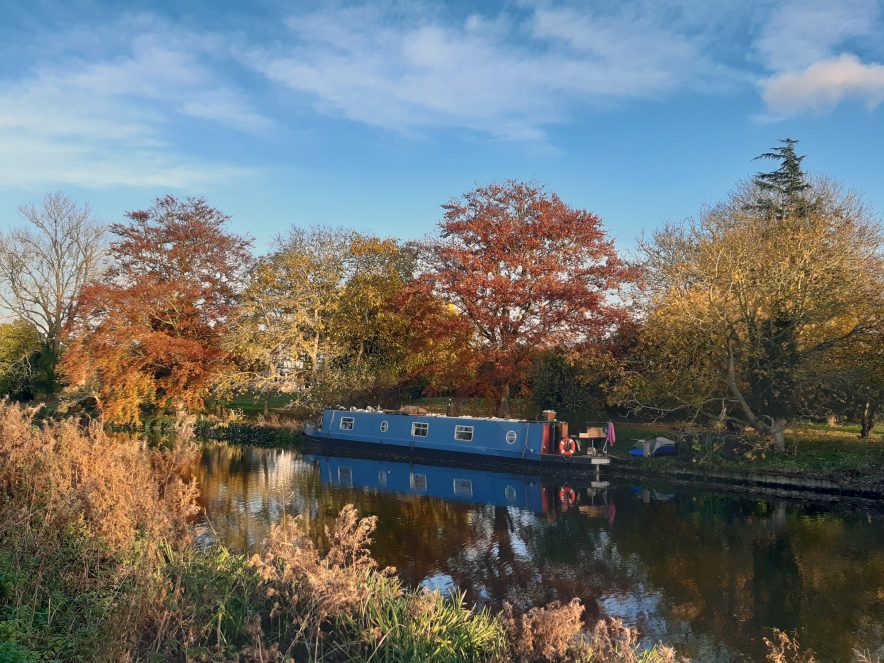 Meeting waterbirds, fishermen and happy dogs on a walk by the River Cam in Waterbeach

I bought a ticket to Waterbeach… because why wouldn’t you want to visit a place called Waterbeach? It was only a few minutes away, and I’d heard that there was a nice riverside walk there. If nothing else, I could probably just enjoy the autumn colours.

The train ride was not very eventful, but all I cared about was that I was on it. When I got off at Waterbeach, I was surprised at how quiet it was. I got off the train and walked towards the direction of The Bridge, which my phone recommended as a good local pub. When I reached the level crossing, I was suddenly unsure of when to cross. I found a lady marooned at the crossing who seemed to have the same problem. She asked me with a sheepish smile, “Excuse me, but do you know if it’s safe to cross here?” I said there was only one way to find out. “It’s been a while since I was in the countryside,” she said, looking a bit embarrassed. We walked together across the tracks and she heaved a sigh of relief when we got to the other side. “We survived,” I declared to her, enjoying this drama. “Oh dear,” she replied, frowning at her map. “I’ve got to go the other way. I’ve got to do this all over again.”

I left her to her battles and marched off towards the river. The Bridge’s car park was full and it looked a bit posh so I decided to save it for another time. I walked past the intriguingly named Cow Wood on a path covered with golden field maple leaves. I didn’t see a single cow. The path, running alongside the river, is a cycle route that takes you all the way past Horningsea and Milton Country Park to Cambridge town centre. Fishermen sat patiently, their hooks in the water. Smoke rose from a blue boat that sat in the shade of the prettiest auburn trees. 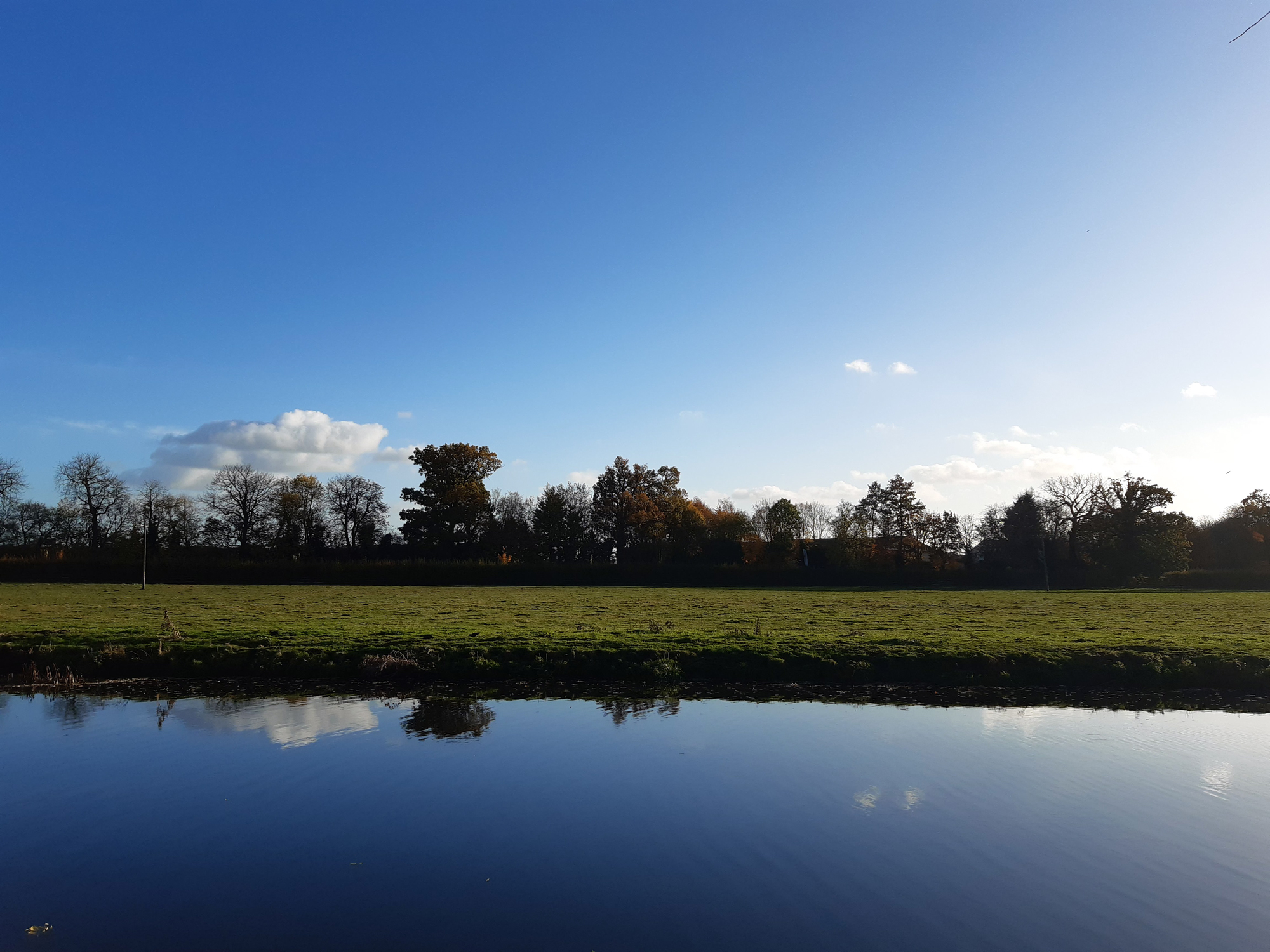 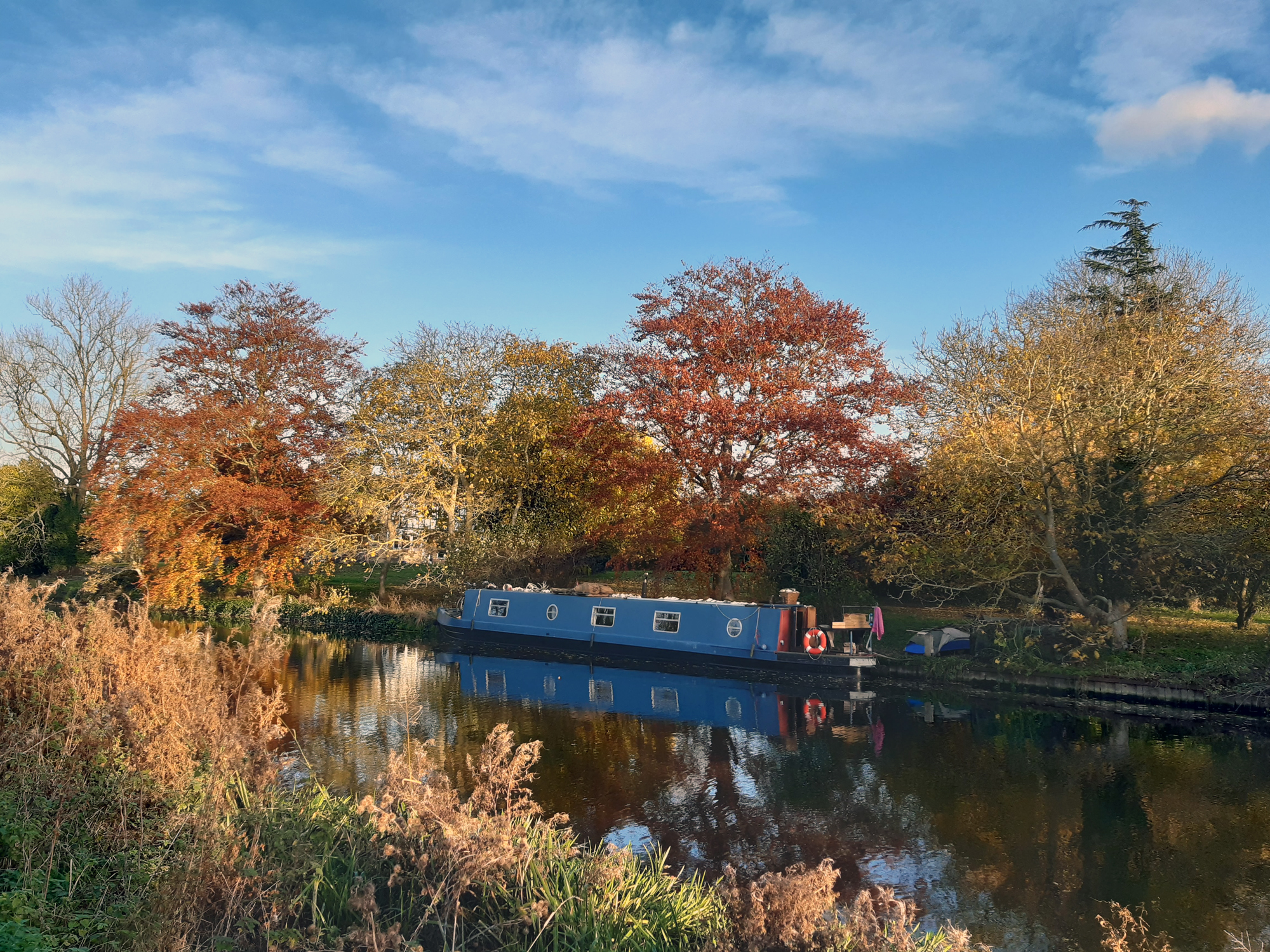 I revelled in the sudden, sharp quiet, as I walked. Goldfinches chirped merrily — sunshine laughter! Coots let out the occasional croak. A huge black bird flew above me: a cormorant! The water of the River Cam, as in many places, was a stunning deep blue, and mirrored the trees and clouds.

I walked past a couple who were busy pointing at what I think was a bird far away in the field. “At the edge of the treeline” I heard one of them say. I peered between the trees to see what they were looking at but couldn’t spot anything. A buzzard? A marsh harrier? I couldn’t tell. It did make me more alert though, and I kept an eye out for any rare bird that I might spot.

Of course, that paid off. Almost immediately after: I caught a glimpse of a shiny blue fluttering across the water. My heart beat quickly, was that a kingfisher? I tiptoed (one must always tiptoe when one spots a bird) across the leaves towards the edge of the river and waited. And yes, there it was, sitting on a branch, its bright orange breast standing out against the dull yellow leaves. I watched it for a while, and suddenly it dipped into the water and out again, showing off those brilliant blue-green wings. It hid inside a bush, presumably enjoying a nice juicy fish. I waited for a while but it didn’t make another appearance.

I walked on, encouraged by this beautiful encounter. I met two very excited dogs and their very calm owners. I saw for a while on a bench, enjoying this moment that universe had gifted to me. It was a good time to be alive, to be able to get on a train on a whim, and sit by the river waiting to spot kingfishers. It’s a nice planet we’ve got, filled with trees and birds and dogs and things. I think moments like these only come when you’re alone, filling you with energy that you need to cope with being around other people.

After a while I decided to turn back and trace my way back to the station to make it in time for the 3 pm train. The sun was setting now, the leaves of the trees bronzing in the winter afternoon light. On my way back, a couple walked past me and I heard them stop. I turned to see what had happened and there it was again: our kingfisher, sitting on a branch close the water. We all grinned at each other. “I saw him the other day,” said the man. “He’s been visiting often.” The lady said she hoped to see him fly: “I love his shiny feathers.”

The three of us stood for a while, at the edge of the river, watching the kingfisher sitting on the branch of a tree. Isn’t it amazing how a shared experience can connect strangers? Imagine the three of us standing near a river in anticipation of watching a bird fly. And sure enough, the kingfisher suddenly turned his head, and flew across the river to a new spot.  All our faces lit up and we chorused, “Beautiful!”

Grinning broadly, I continued to walk, breaking into a bit of a jog when I realized that waiting for this kingfisher might mean that I’d miss my train. On the way I spotted a tree with four large.. wait, were those… vultures?! I slowed down. Ah no, they were just cormorants. Several of them sat on a leafless tree. A plane flew above us and all the birds turned in unison to look at it. It was a funny sight, birds perched on top of a tree staring at an aircraft flying overhead. 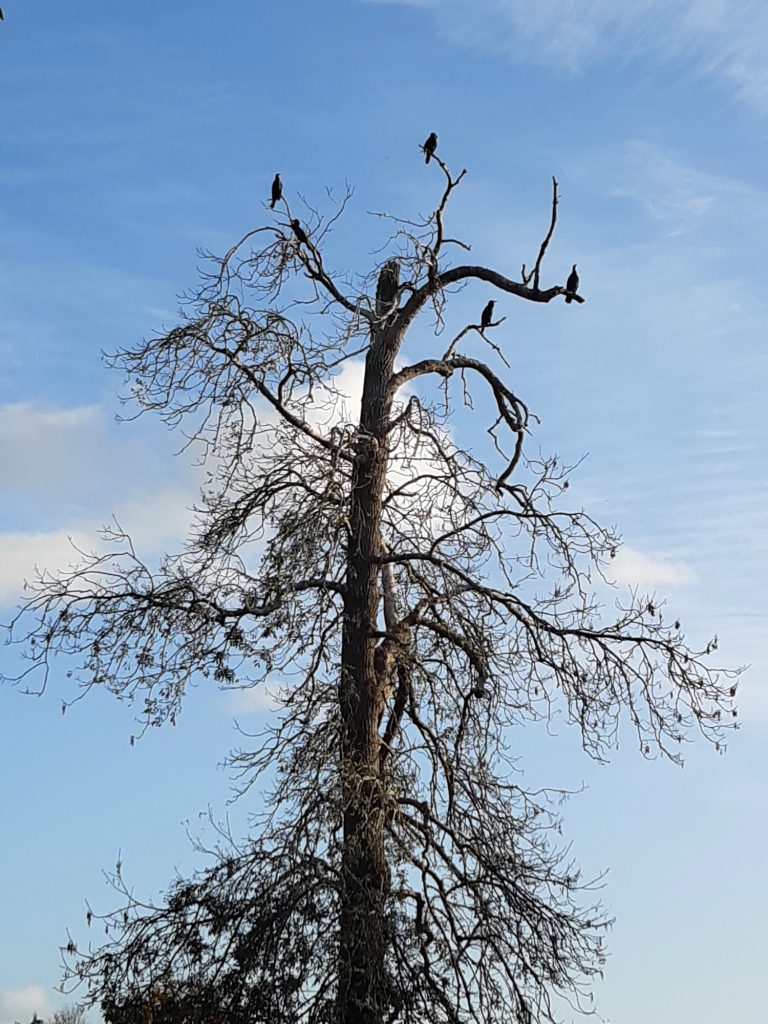 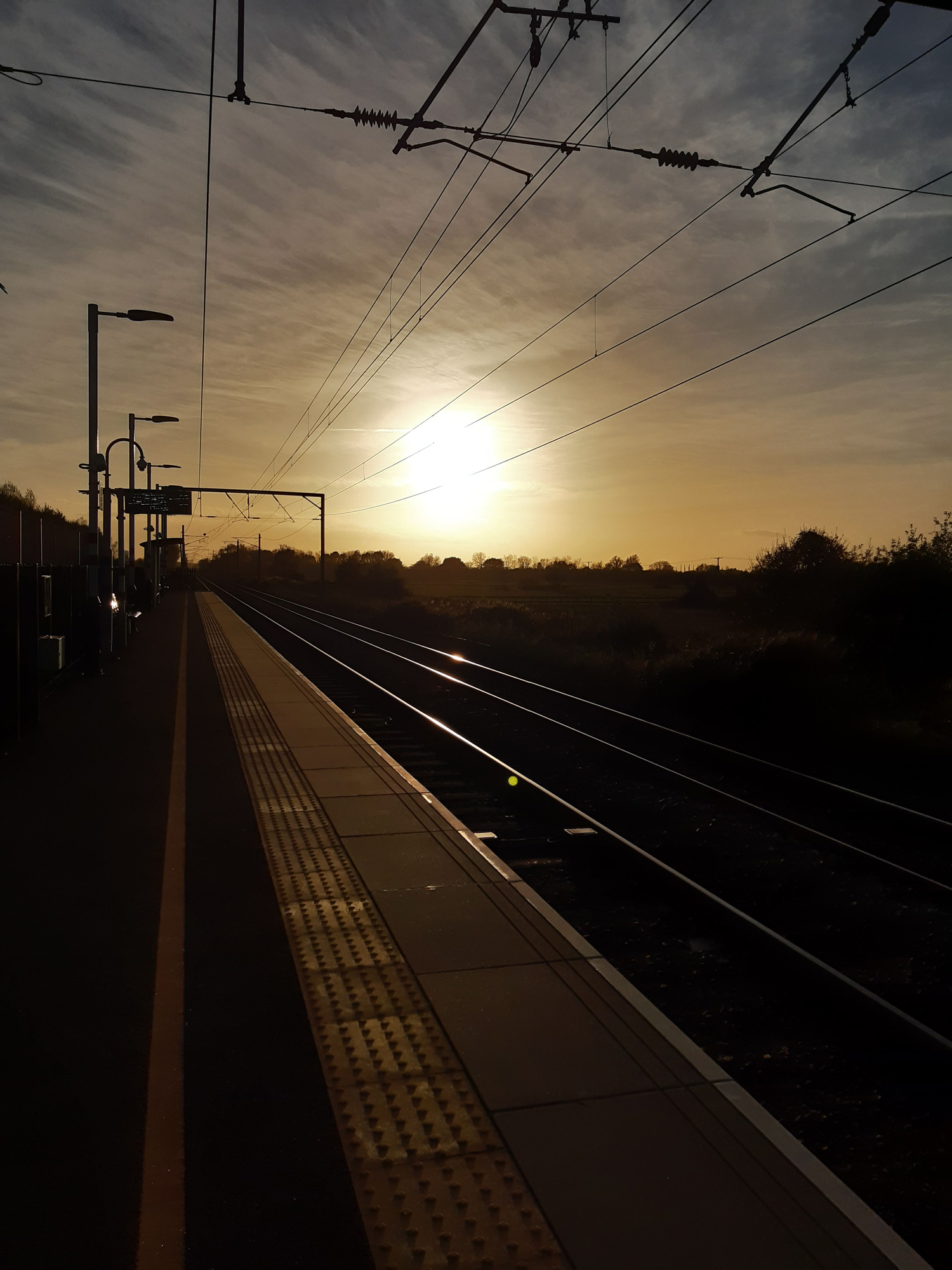 I reached the station and unthinkingly went back to the platform I got off at. A train to Ely passed us by. I had to take the King’s Cross train, but the train arrived and went past me, stopping ahead of the road crossing. I realized then that the platform extended on the other side! I walked over to Platform 3 and settled into a chair, pleased that I was the only one on the platform. I seem to find myself alone on railway platforms a lot. After a while the sound of neighing filled the air, and I realized I was close to a field where horses were grazing. Starlings gathered for their evening chat, and the electricity wires shone a metallic golden.

After I got home, I went on to the Waterbeach Facebook community and was surprised to find active discussions about the kingfisher’s sightings. If I ever wanted to live in a quiet village, this seemed like a good option. But for now, occasional walks in the village seemed promising. What else would it have on offer? Bitterns? Weasels? Water voles? Fen tigers? There was only one way to find out.