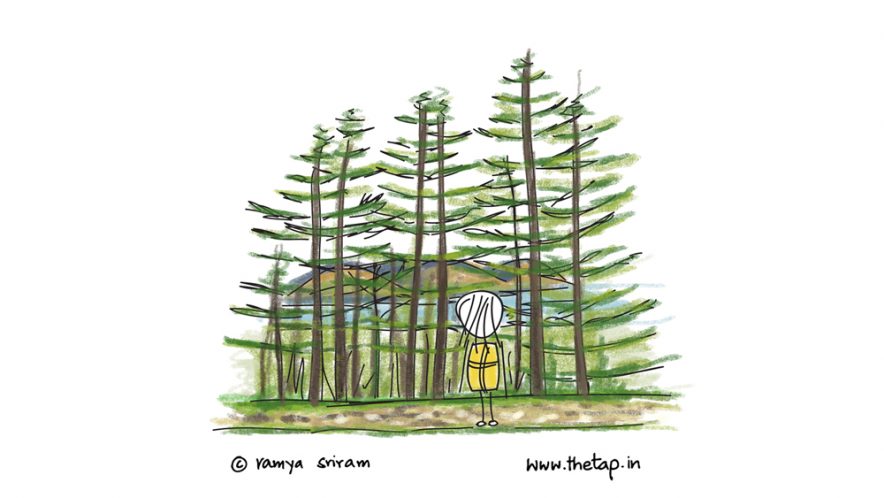 An illustrated account of the much-talked-about Keswick walk: the route from Walla Crag to Ashness Bridge (starting at Great Wood). For a detailed route, check out the National Trust website.

One of the hardest decisions to make as a first-timer in the Lake District is to decide which fell you’re going to take on. After much debating, I announced to my husband that we should do the Keswick walk from Walla Crag to Ashness Bridge – it’s got “stunning views”, I read out from my phone.

The woods were unexpectedly silent and I was relieved to see only one other car parked at the foot of the hill. Considering that it was a National Trust car park, I had dreaded running into scores of other hikers who might have decided to set out on the Great Wood walk on this fine spring day. But luck was on our side, and the magpie chirping at us from the trees made me feel even more welcome.

With much enthusiasm, we set out on the muddy path that begins at the car park and gently winds its way around the hill. We walked in meditative silence for the most part. It’s a gentle slope upwards, unlike the steeper Cat’s Gill path. I turned around after a few minutes, and was pleasantly surprised to see the lake — pieces of shimmering blue — peeking out at me through the trees! 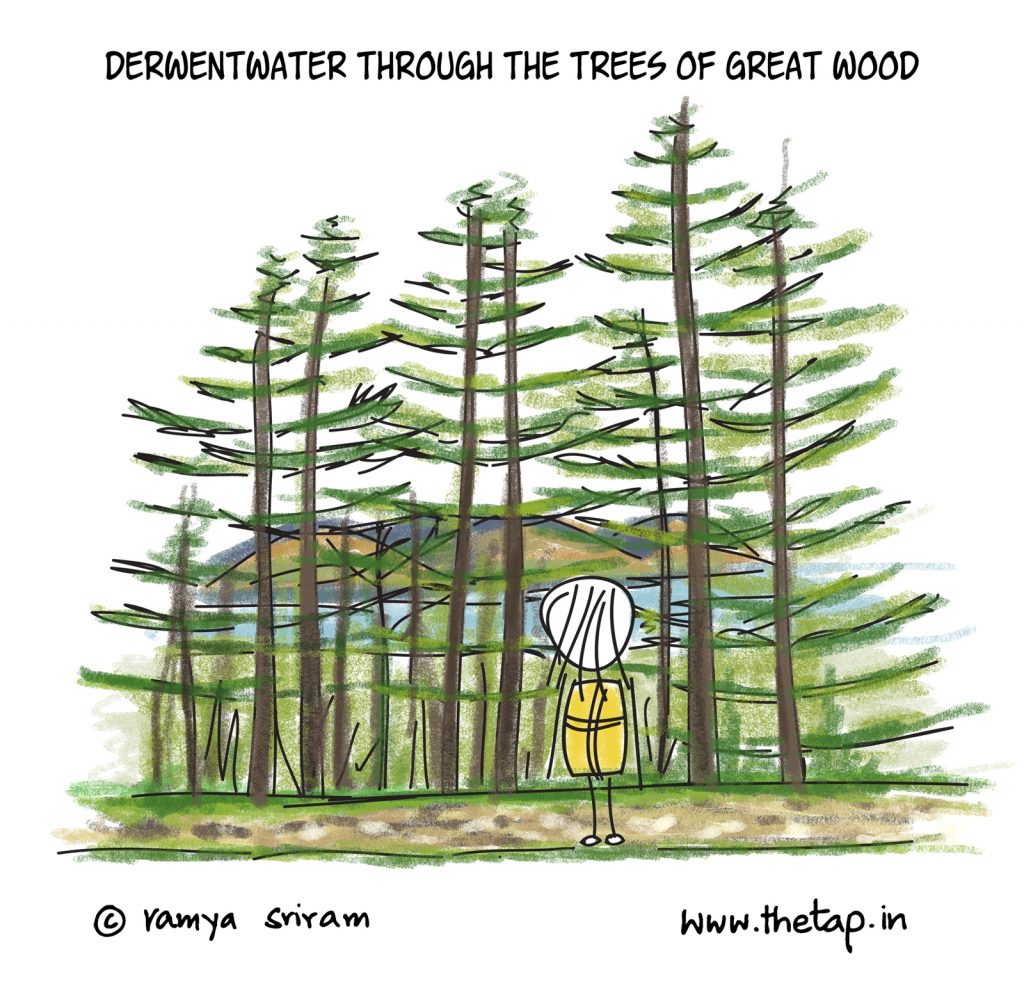 The path then continues alongside a field, which opens up into a wonderful view of Derwentwater.  I could see why this was such a special Keswick walk: it provides views of some of the loveliest landscapes in the area. The path forks at the end, with the right curving along the steep Brockle Beck valley. We scrambled down to the stream, and I couldn’t resist taking a drink of the clear water, which was delicious! 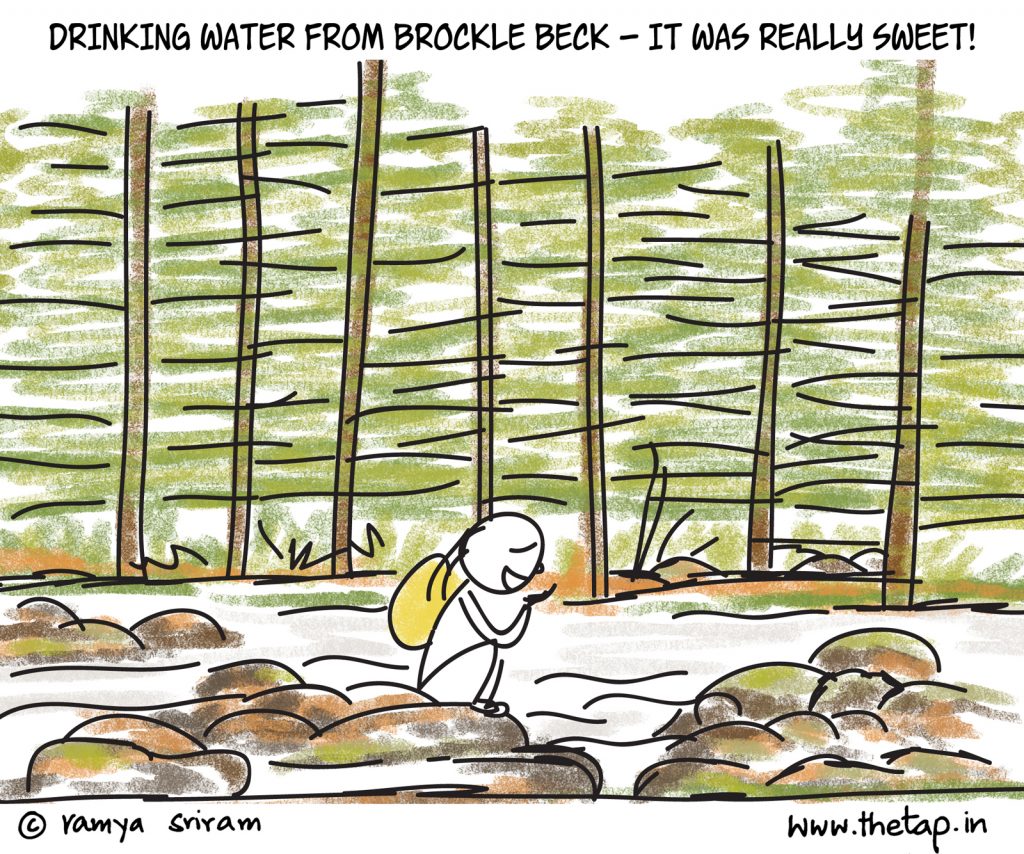 We climbed back the steep slope onto the trail (I needed some shoving from the husband, and I landed on the track most inelegantly, but hey, nobody was looking). The path itself descended towards the beck after some time, making me regret my previous clumsy venture. We then crossed the footbridge to a tarmac road. We came across a pretty house that boasted of two enormous, gorgeous ponies, with manes that made me envious. We crossed another footbridge up ahead to get back to the hill. The trail then became what I thought was rather steep but didn’t want to admit aloud, as fit hikers strode past me with ease. A characteristic stony wall stayed with us on the right. I looked over and discovered two large, comfortable-looking cows in the foreground. But the backdrop was what was incredible: overcast skies looked down at the town of Keswick, nestled among fields and woods. Clouds settled on the blue-grey peaks, and the Derwentwater and Bassenthwaite lakes reflected the skies. I stopped every few minutes to look at the views to discover something new each time: the shifting shadows over the hills, the way the sun lit up the grassy patches, a lone cow here, a herd of sheep there. 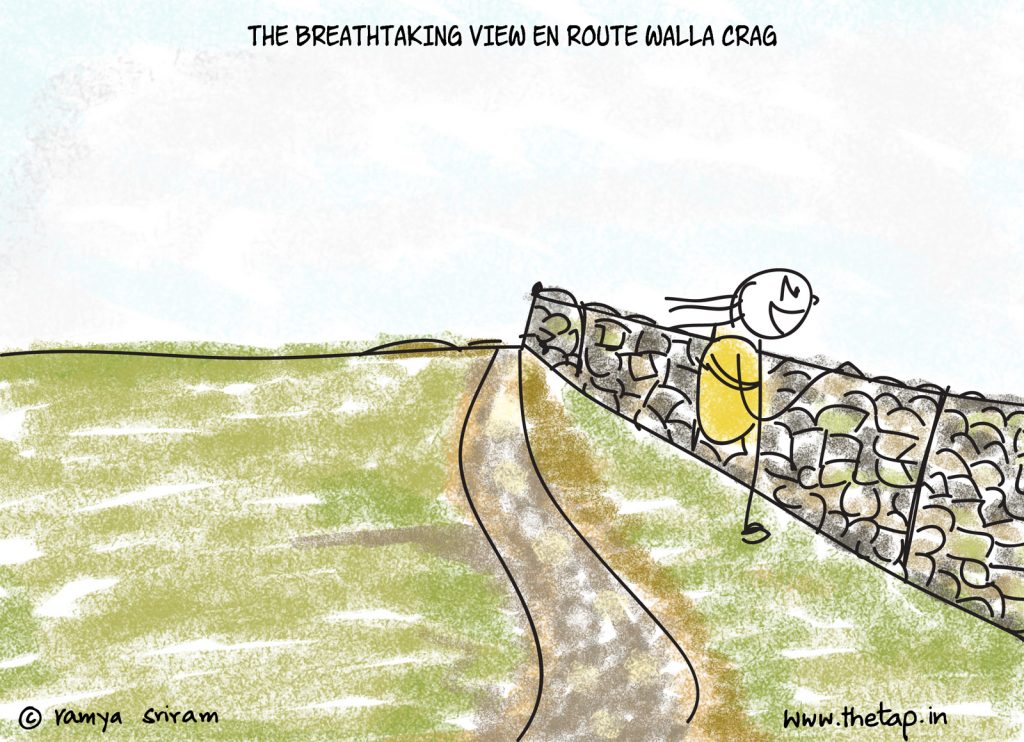 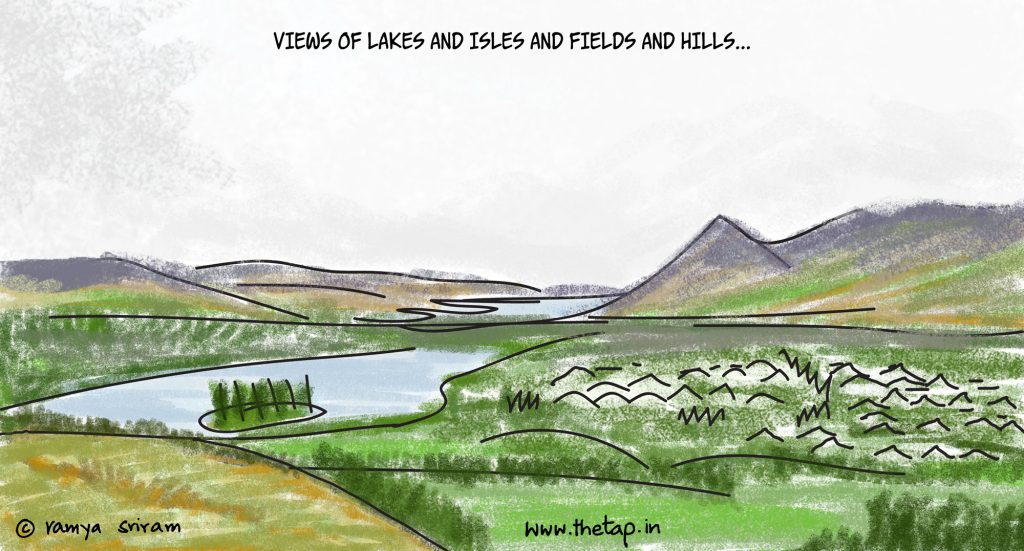 At the end of the track, we crossed the stile on the right (the marked route asks you to take the left, but the two paths meet eventually). The wind got stronger, but the sun suddenly came out, making Derwentwater shine. The path was muddy and wet in places, but we clambered up to the rocky platform, the summit of Walla Crag. Just as I whipped my phone out to take a picture, it started raining – cold big drops of rain mixed with hailstones. We took in the hazy, mist-covered view and quickly moved on.  I admired the brave guy who just sat on the rocky summit in the rain, chatting away on his phone. Another hiker walked barefoot, bare-chested. 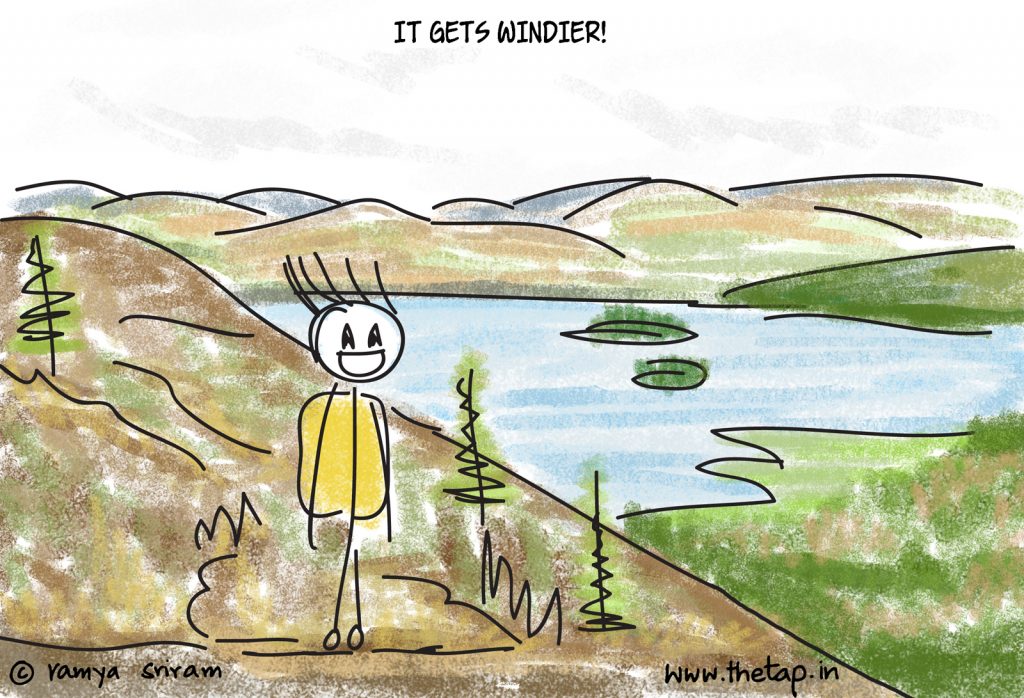 Now that the summit business was over, I had a big stupid grin pasted across my face. I burst into song as we continued the trail to Ashness Bridge, trying to skip lightly and playfully across a tiny stream, which saw me landing on my bum in the muck. I sobered up and spend the rest of the longish trail watching the sun go in and out of the clouds, highlighting the green and yellow of the hills. It had stopped raining and, to my delight, two white sailboats lazily made their way across the lake.

A few minutes later, we were greeted by the classic countryside view of sheep grazing on bright green fields. As we got closer to Ashness Bridge, I heard sounds of children playing. As one of the most photographed locations in the Lakes, the bridge was fairly crowded (there’s a direct, alternative track from the Great Wood car park). If it weren’t for so many people, it would make for a lovely place to sit and write or draw, with a beautiful view of the peaks and the lake. Even the most unromantic of people would probably feel compelled to spew some verse here. 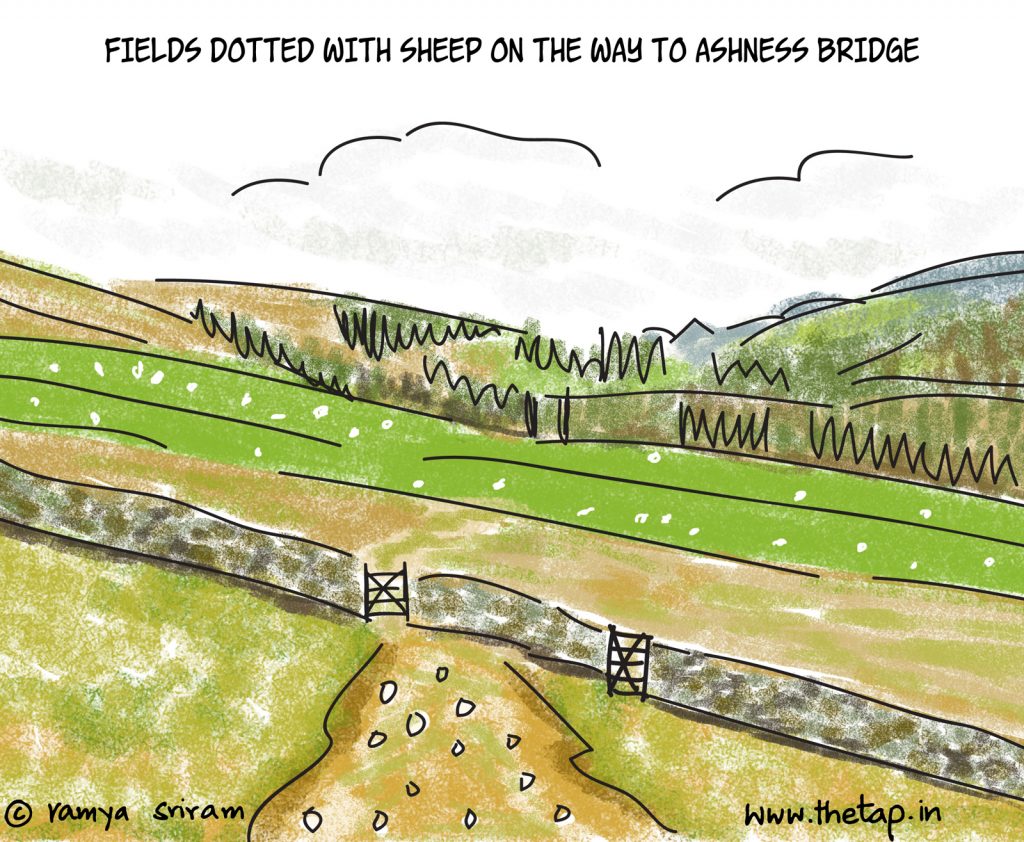 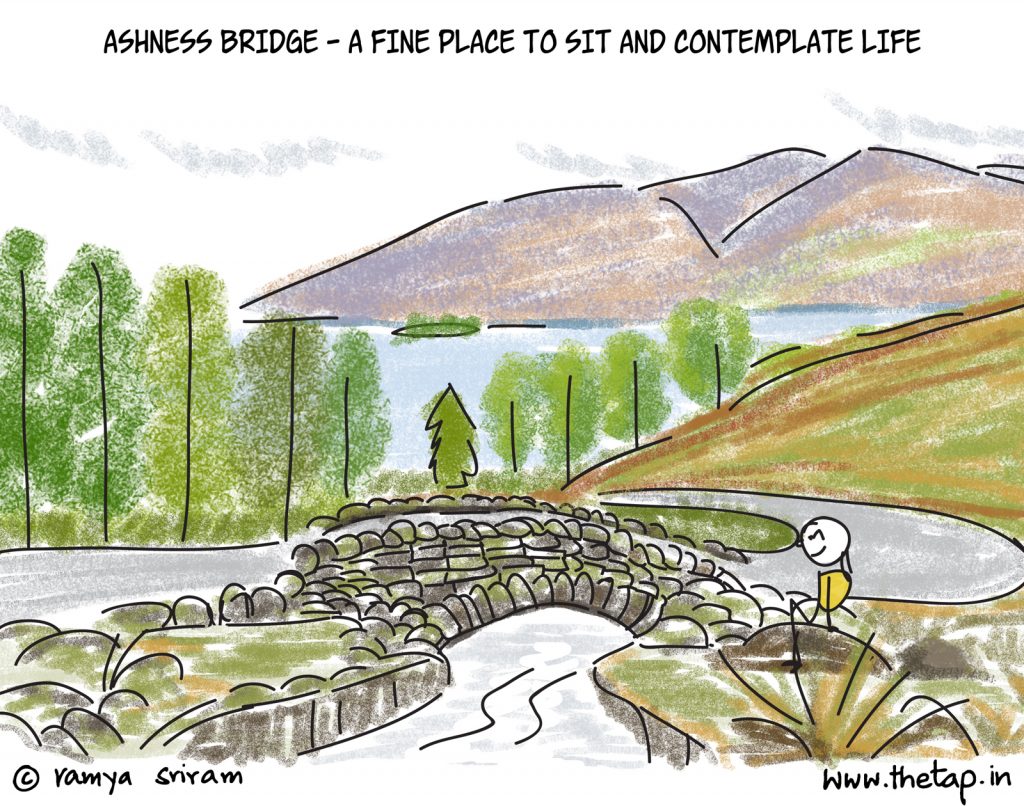 The walk back from the bridge to the car park was not much to write home about. It was a bit strange, walking on tarmac, ambling alongside cars on the right and the peaceful blue of Derwentwater on the left. The ground felt harsh and hard after miles of walking on mud and grass.  Many hikers made their way towards the bridge, and I was thankful that we’d got out early. The car park was overflowing with vehicles getting in and out. But as we pulled out of the car park, I saw the waters shining through the leaves, and I was enraptured all over again.

Also read: A night in a lighthouse in Wales