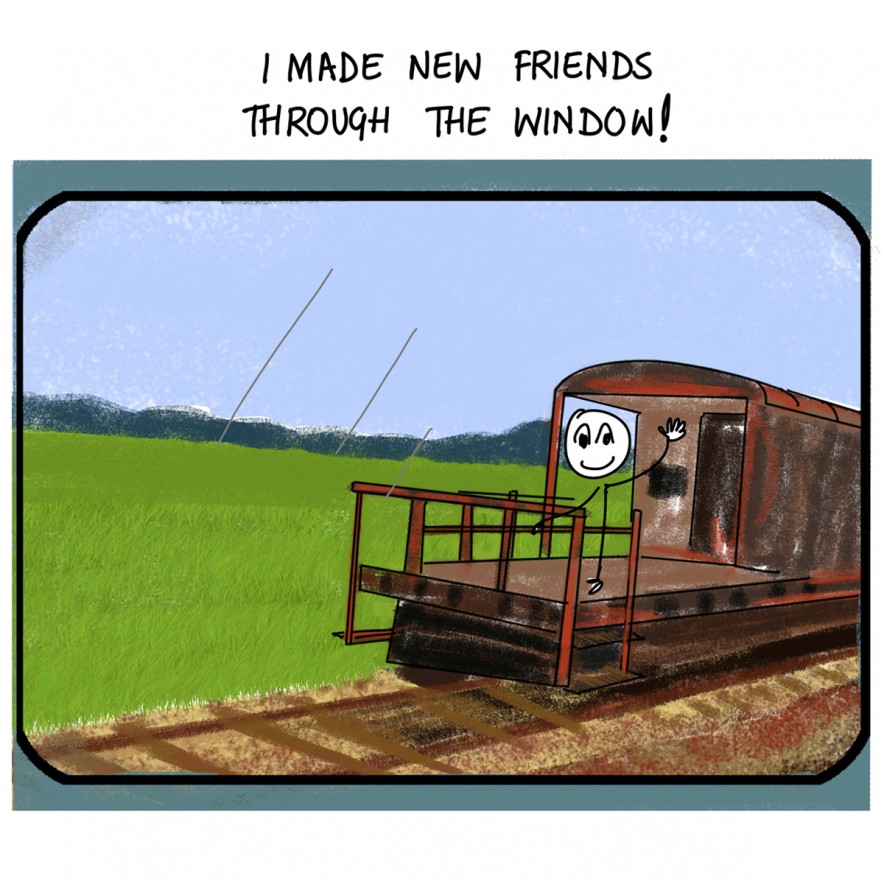 This story was first published by Yahoo! India Travel | Traveler on Tue 5 Nov, 2013 12:05 PM IST. Read it here.
(Update: This link no longer works as Yahoo! India recently shut down its travel section, taking away all the the stories  and comments with it.)

Delhi to Thiruvananthapuram on the Konkan Railway, all of 3,149 km, is the longest trip by a Rajdhani Express in India. Ramya Sriram hops on and doodles her memories of it

The network of the Indian Railways is like the human body’s circulatory system, comprising trains that criss-cross the peninsula like blood vessels, carrying and delivering passengers and goods in fascinating co-ordination. I’ve always been a fan of rail journeys and believe that they take you to places otherwise inaccessible—places that are best appreciated from the door or window of a train. The Konkan Railway (Roha–Thokur) is a rail route in India that treats you to some of the most spectacular sights of the mountains, valleys, rivers, forests and fields that grace Maharashtra, Goa and Karnataka. I was asked by various people to travel on this route to “experience heaven”. The Thiruvananthapuram Rajdhani is your best bet, they told me. It covers the entire Konkan stretch during the day. So I thought, why not? Though the train traverses the Konkan route only on the second day of its 42-hour journey, I wanted to take the train from its station of origin to its final destination. I flew to Delhi, got myself to Hazrat Nizamuddin station, and clambered onto train number 12432. I had a side lower berth, with a large window to keep me company. The coach was relatively empty except for an Udupi-bound couple — I later discovered that they were professors at Manipal University. Luckily, there was nobody travelling on the side upper berth so I had enough and more space to myself! The train started at 11 am sharp, quickly reaching an alarming speed, not unlike that of a plane that’s about to take off from the runway. After some time, breadsticks and red cups appeared, followed by warm tomato soup. I tucked into my ‘Meals on Wheels’ lunch and read ‘Rail Bandhu’, the onboard travel magazine that was available in every compartment. For the next few hours, we went non-stop through brown, barren land and dry river beds, the monotony of which was broken sporadically by pretty mustard fields dotted with yellow.  We sped past nearly fifty stations across Haryana, UP and Rajasthan. Some of the intriguing ones that caught my eye were Bayana Junction, Mokholi and Sawai Madhopur. There were, as one might expect, cows at the Mathura station and camels at signals in Rajasthan. The train reached Kota at about 3:30 pm, where I got off and cleaned my window vigorously with newspaper during the ten-minute stop. Fellow passengers gave me curious looks and asked me why I was wiping the window. I, puffed with pride, announced that I was a writer and I needed a good view. They immediately offered to help. As we moved on, I noticed empty platforms, looking forlorn and hungry for visitors.

Madhya Pradesh approached, bringing with it the black soil of geography-textbook fame. We weren’t even twelve hours into the journey and I was already spellbound by the scenic variety before me. The evening wore on, the light faded and I fell asleep before we reached Vadodara.

I woke up at about 6 am the next day and found that we had crossed Panvel and were already in the Konkan. Fields rolled past, featuring numerous quaint thatch huts. The soil had taken on a startling orange-red tinge. I excitedly went to the door and opened it. Suddenly, a tunnel hit us! Even though I had expected it, I was surprised and thrilled when we were plunged into blackness with a whoosh. When we got out, we were on a bridge over a river — but it wasn’t long before we were inside a tunnel again. I quickly got used to the coach being alternately submerged in darkness and flooded with sunshine. A pattern emerged — a tunnel was followed by a river and then another tunnel. I started to count the number of tunnels to confirm the presence of all 92 of them but gave up before I got to ten. The jagged rocks at the entrances of the tunnels were covered by a mesh in almost all places. Inside some tunnels, the roof was cut at regular intervals to allow streams of sunlight to enter. The biggest thrill was when the train took us through the 6.5 km long Karbude Tunnel between Ukshi and Bhoke, inside which we spent a good ten minutes.

Ratnagiri was approaching, the speaker announced. After a quick stop, we traversed the Panval Nadi viaduct, which stands at a height of 64 m over the Panval river, making it one of the tallest viaducts in Asia. The number of bridges on the route add up to a staggering 2,000, with 179 of them across major rivers. If you want to marvel at the engineering challenges overcome during the construction of this railway, you have to see it to believe it!

After another two-minute stop at Sawantwadi Road, the train resumed its thundering pace. The landscape gradually changed from the rocky forest terrain of Maharashtra to the blue rivers of Goa, with small green strips of land in between. The beautiful Zuari river greeted us at Karmali. The train stopped for a couple of minutes just outside the Karmali station, where I spotted birds near a pond, including a kingfisher, which scanned the pond keenly.  We rumbled through the Uttara Kannada towns of Karwar and Udupi, where the number of bridges multiplied rapidly, making the number 2,000 conceivable. We crossed the majestic Sharavathi River (at Honnavar), which boasts of the longest bridge on the Konkan Railway. Sudden bursts of paddy green appeared between the coconut groves. In some rivers, I spotted fishing boats. In smaller streams, the blue of the waters was masked by the deep green reflection of the coconut trees that fringed them. As we headed towards Mangalore, the sun was starting to set in synchrony with the closing curtains of the Konkan scene. The Nethravathi River provided a grand ending to the show. With Kerala came muddy rivulets, jackfruit trees and the characteristic moisture-laden air. The train stopped at multiple stations during the night, with people getting on and off constantly. We reached Thiruvananthapuram at 4:15 am, well ahead of the scheduled arrival time (4:55 am). I got off the train feeling richer, savouring the newness of steady ground.

The Thiruvananthapuram Rajdhani offers a glimpse of the country’s fascinating and changing landscape, introducing you to its contours and textures all over again. It is also the longest running Rajdhani, covering a total distance of 3,149 km. Like all those who recommended this trip to me, I recommend it to anyone looking for a getaway — a getaway journey and not a destination. Sit back, be a child, allow yourself to be amazed. Disconnect, let go, and just be. Stand at the door and let the breeze bring you the flavours of ten different states from the north to the south of India. Food, comfort and a visual treat is delivered to you at your seat. Life’s literally a joyride — at least for 42 hours!

One Comment on “Train ride of a lifetime: 42 hours on the Konkan Railway”