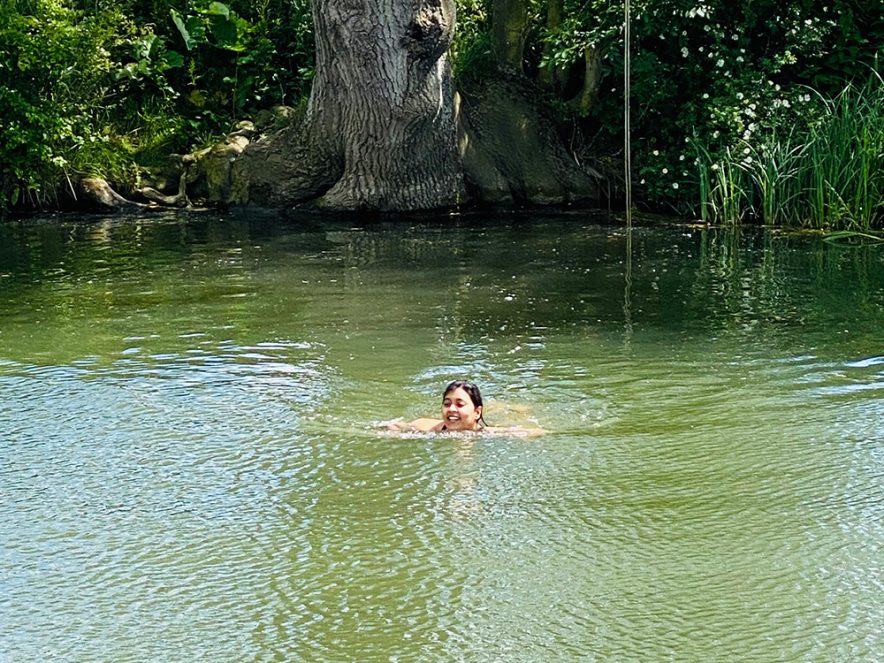 I started wild swimming about a year ago in the UK. While I’m still only taking baby steps, it’s changed me so much already (for the better!). If you’re swimming outdoors make sure you follow all the safety rules, always have someone with you, and generally be very careful.

I was floating on my back in the water, looking up at a brilliant blue Norwegian sky. Wisps of cloud swirled lazily around the sun, like the whites of poached eggs in the making. It was a late summer morning, and it was starting to get hot. My face and shoulders were beginning to feel the burn while the rest of my body was still submerged in the icy waters.

It had taken me some time to gather the courage to get into the water. The water temperature was about 18 degrees but it was still cold enough to make you gasp when you first entered.

I was at Langoyene Island, just off the coast of Oslo. I’d flown up to Norway from the UK, to meet my two friends, who had just moved to the capital city. It was a surreal space for me to be there, far removed from my “normal” environment, which I’d so far known as a busy Indian city and a British university town.

I glanced at the beach where my friends were sunbathing. Together we made up a curious mix of nationalities: Azeri, French and Indian. Having grown up in a landlocked part of India, there was no way I was giving up swimming in the sea for a few minutes of sun on my back, no way! I tried to shout out words of encouragement to them (“It’s not as cold as you think it is!”) but failed. I even tried “Come on in, I’ve found a warm spot here!” and was met with the response, “Did you pee?” And so here I was on my own, bobbing and down, being rocked gently by the waters of the North Sea.

Not a bad place to swim!

A cormorant came and landed not far away from me. It dove in and disappeared, the way cormorants do, only to reappear a few seconds later in a spot much further away from me. I started to dive along with it every time, trying to look for it underwater but it was too quick for me to keep up. Suddenly, it emerged close to me: and I could see the turquoise iris of its eye and water glistening on its beak. It was beautiful.

As I swam, I started to slowly get familiar with the landscape below the water: I knew where the rocks jut out sharply and where they flattened. I knew where the fjord suddenly deepened. It’s fascinating to be able to learn about the texture and shapes of a land beneath that which you can see upfront.

For an overthinker and overdoer like me, swimming (literally) helps me strip down to the basics. Parting the waters with my arms, I felt like I had some control over what I was doing. This space and time belonged to me.

When I’m in the water I imagine (perhaps, wrongly so) that I swim with the power and grace of an orca. But I always marvel at how ungainly I seem on land immediately after getting out. I heaved myself out of the water and waded clumsily through the shallow beach where my happy (and completely dry) friends were waiting to tuck into grapes and cherries. My heart was bursting with joy.

After a prolonged and intense burnout at work and life in general, swimming saved me from drowning in a pool of despair and self-created pressure. It had only been a year since I’d been swimming “properly” and the great big outdoors was still something I was getting used to.

I’d swum a lot as a kid, but in a very “wrong” way. We were taught to kick hard and fast, with little regard for whether the technique was sustainable as you got older or whether that worked for your body type and stamina. And I wasn’t interested in learning to swim as a kid: I just liked being in the water and fooling around. Little did I know that my affinity for the water would revisit me in my early 30s, getting me to sign up for a local pool membership and eventually getting so addicted that I’d get up at 5 am and walk in the cold and dark winter mornings to get to the pool (which was heated, of course!). YouTube videos helped me develop a semblance of a technique. I worked through the drills, and woke up everyday with renewed purpose.

Back in India, I was always happy to stand under waterfalls and take a dip in the plunge pools, especially in the Western Ghats. My first experience of an outdoors swim was in a protected natural rock pool near Rainbow Waterfalls, Meghalaya. It was more of a paddle and less of a swim but the memory of it still gives me goose bumps. 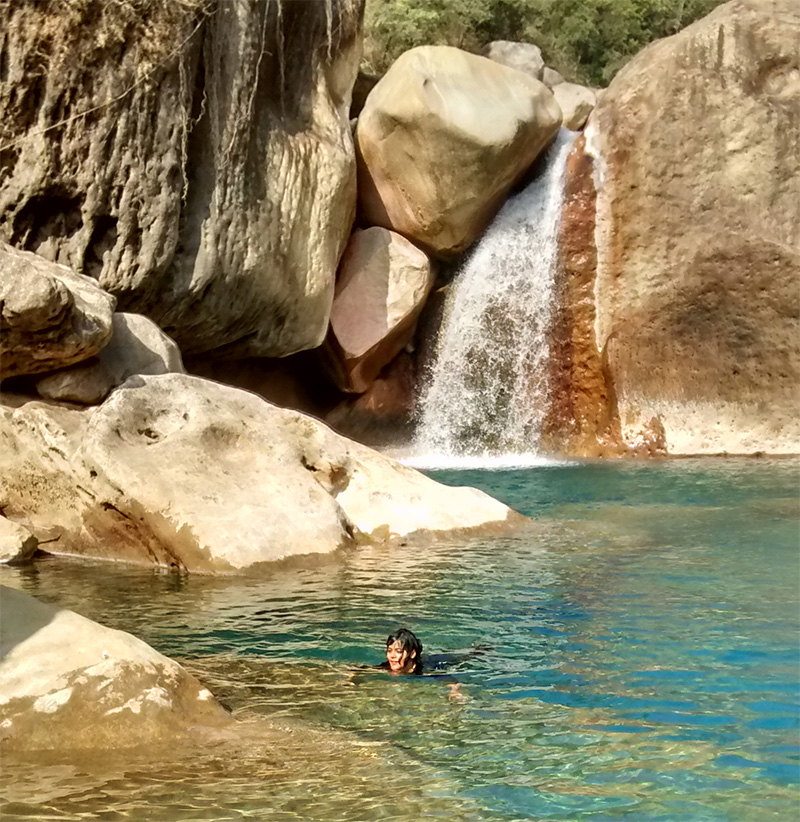 As I worked on my swim technique in the UK, eventually I started getting brave enough to try swimming outdoors. And what better place to begin that journey than in Cornwall? I had my first “real” experience of wild swimming in a quiet cove in West Cornwall. Portheras Cove features a somewhat isolated beach, accessible by a walk down a steep cliff. My long-suffering partner had agreed to take a detour and drive us out here, even though he’s not much of a swimmer himself. I’d wiggled into my swimsuit on the beach, my heart beating loudly in anticipation as I was the only one in the water. I’d stayed close to the shore, a little scared of going deeper into the water where my feet couldn’t touch the ground. I’d done a curious mix of breaststroke and front crawl, figuring out what worked best in the shallow water. But what I liked best was being on my back. I was almost completely still, making zero effort,  yet there was movement. 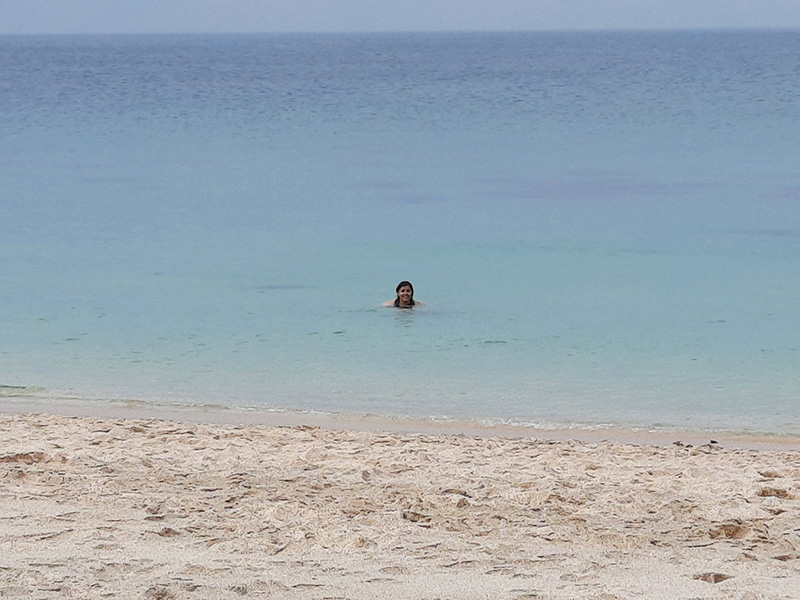 A delight to be the only one in the water | Portheras Cove, Cornwall

I’d gone back again the next day, a warmer day which saw about a dozen people in the water. Drawing confidence from the crowd, I’d swum further out into the sea, alongside another woman, all the time beaming at her like I’d just won a prize. We ducked under the growing waves and ooh-ed when particularly big ones came our way. I enjoyed the beauty of this shared experience, as our collective gasps and smiles and encouraging exchanges bound us together.

And so began my undying love and passion to jump into any water body: lakes, rivers, tarns, seas. I swam in the river in Grantchester, which was almost like rite of passage for someone living in Cambridge. I swam in the river near Houghton Mill, which was terrifying as I decided to open my eyes under water and saw the large grasses swaying underneath. I’d watched too much of River Monsters growing up! I skinny-dipped (much to the alarm of the husband) on a hot summer’s day in the Great River Ouse near St Ives. Here, ducks and moorhens came up to greet me. I think they were harmless but I was suspicious—I was invading their territory after all. I swam in Burnmoor Tarn, high up in the fells of the Lake District, which was an altogether special experience. 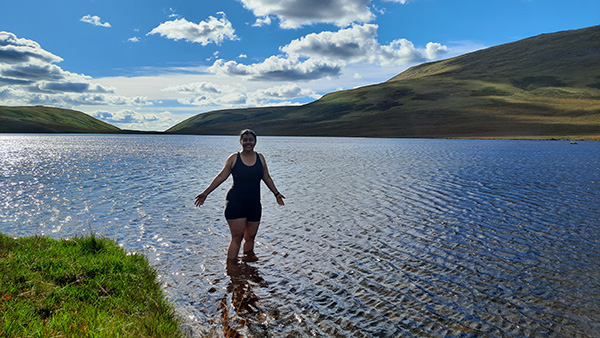 A dip in the cold but beautiful Burnmoor Tarn, Lake District

Back in Oslo, the day after the fjord swimming experience, I decided to go to Sognsvann. Sognsvann is a lake just outside the city, surrounded by acres of pine forest. It looked deserted at first, but as I got closer I found that there were lots of families sitting by the river, dogs paddling, and kids shrieking as they jumped off the pier. I had my swimsuit with me but no change of clothes as I didn’t expect to be swimming. But the sight! I couldn’t resist.

Nervously, I changed my clothes behind a tree. Worried that someone might do away with my bag, I smiled at a kind Norwegian lady who agreed to look after it. I walked through the soft sandy floor which quickly deepened. The water was clear and silky. I swam further out into the lake, going around in a circle. There were no weeds in this part of the lake: nothing interrupting my movement. Yes! Surely I was swimming with the grace of an orca here. The lady and the bench became smaller and smaller. When they were just a speck in the distance, I turned over and stared at the sky. They said that a storm was approaching, but the sky was quiet, showing no signs of disturbance. I swam for a good half an hour, and when I returned my bag was still intact beside the smiling Norwegian lady. We exchanged a couple of sentences—she spoke in Norwegian and me in English—and we seemed to understand each other perfectly. I changed behind the same tree, surprised at how easy and accessible all of this was.

It’s been two months since my trip to Norway now and I still have the tan lines of my swimsuit stamped on my back. And I look at it every day, like battle scars that I’m proud of. For someone who used to be painfully self-conscious and tired and anxious , swimming gave me confidence, strength and resolve. And joy, so much joy.

I’ve always looked at life as a bit of a mystery to solve. I’m constantly trying to put the pieces together. But when I swim there’s no puzzle. I’m in a space which feels familiar to me. I’m unanchored, yet afloat. 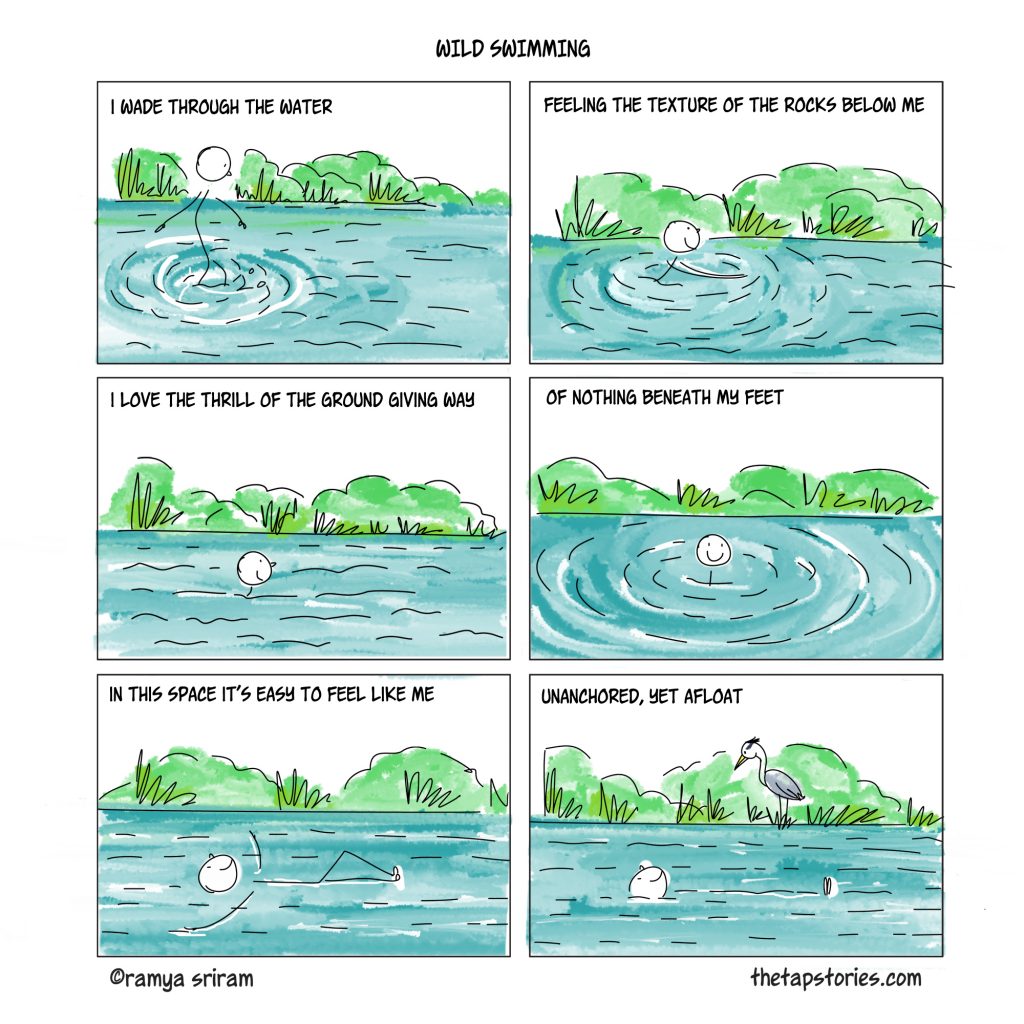 A guide to wild swimming in the UK