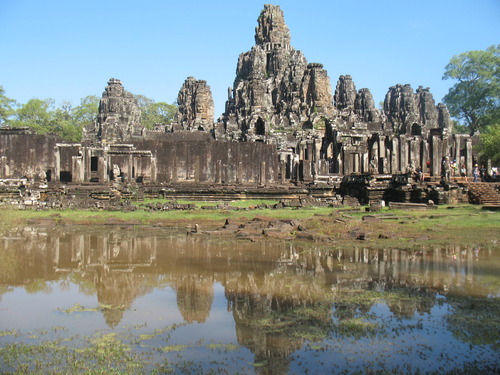 The 216 faces of the Bayon seem to know something we don’t. The  gate  is  adorned  with  four  large  faces,  each  looking  outwards  in  a  different  direction.  Each  of  them  has  thick  lips  curving  upwards  at  the  corners  in  a  meditative  smile.    “The  faces  represent  Lokeswara  or  Avalokiteshwara,  the  Bodhisattva  of  compassion,”  Sophai  says.  On  either  side  of  the  gate  are  three-headed  elephants  with  three  trunks,  which  depict  Airavata,  Lord  Indra’s  vehicle.  With  Hinduism  and  Buddhism  both  represented  within  one  structure,  the  gate  serves  as  my  first  introduction  to  this  unique  two-in-one  religious  theme  that  seems  to  pervade  Cambodia’s  temples. Carvings  of  apsaras  on  the  pillars

The  outer  gallery  has  intricate  bas-reliefs  of  battles  between  the  Khmer  and  the  Chams  and  depict everyday  activities  of the Khmer people  such  as  farming,  fishing  and  cooking.  Some  elements  are  carved  in  painstaking  detail  – branches  of  trees  gracefully  make  their  way  through  thousands  of  delicate  ovate  leaves. Bas-relief  on  the  outer  enclosure:  the  battle  between  the  Khmer  and  the  Chams The Bayon temple: The towers The faces of the Bayon