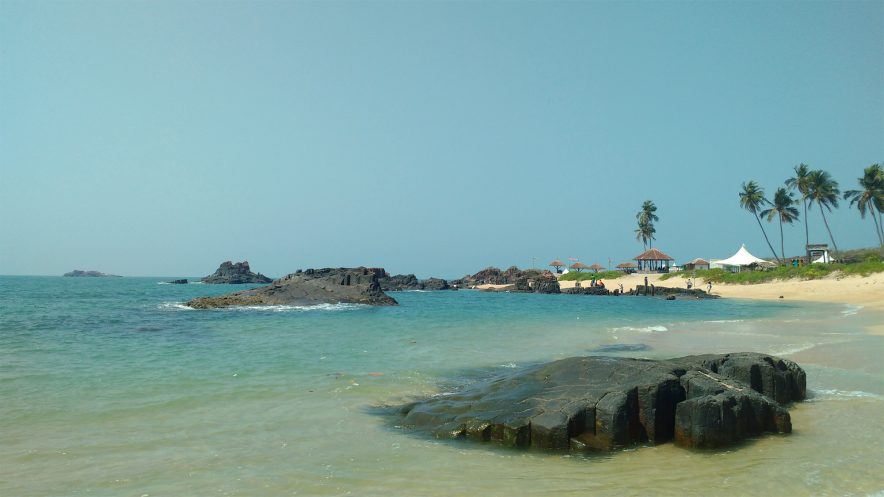 St Mary’s Islands in Mangalore, Karnataka, is home to massive basaltic rocks that formed millions of years ago, when Madagascar split from India.

It’s a blazing hot February afternoon. The summer sky is a clear, gemstone blue, and the sun is white, blinding. A gentle sea-breeze soothes my heat-flushed cheeks. I am at the coastal town of Malpe in Karnataka, about to take the 30-minute ferry to St Mary’s Islands. With me is Harsha, close friend and proud local, who’s been to the island several times and is excited to show me around. The poster at the ferry ticket office displays pictures of dolphins leaping out of the waters and I’m enormously excited at the chance of spotting them. We climb onto the boat along with about fifty other people.

The wind is strong, and I stand at the bow of the boat, clutching at my billowing kurta. Brahminy kites soar above us, their white heads silhouetted against the burning sun. I stare down in anticipation at the waters, waiting for the aforementioned dolphins to emerge. But instead, I feel a vibration from the bottom of the boat: a loud Bollywood song. I’d forgotten that the Rs 300 ticket had also promised on-board entertainment. Surely this would only scare away any potential sightings of animals and birds? I look around annoyed, but nobody else seems to mind. Twenty minutes into the ride, I notice a large group of seagulls above a rocky outcrop. The tips of the rocks were splashed with white: “from decades of bird droppings”, Harsha supplies helpfully. A distant brown line in the horizon grows bigger and bigger and puts forth coconut trees as it approaches. Blobs of rocks appear scattered all around the island.

The ferry is too big to moor directly so we get ourselves into a smaller boat which takes us closer to the shore. We wade through the waters barefoot, slippers in hand, towards the jaunty “Welcome to St Mary’s Island” sign.

From the outside, the islands look like any tropical getaway you might have seen in a magazine: turquoise blue sea, white sandy beaches and wind-swept palms. However, what makes them unique are the enormous structures that fringe it — columnar rocks rising up to 15 feet in height. These rocks were formed by the volcanic activity that took place when Madagascar broke off from India, a rift that occurred 88 million years ago. Today, this group of islands is separated from their cousins by 3,000 miles of sea. Though not immediately obvious, the islands are split into four smaller ones: Coconut Island, Daryabahadurgarh Island, North Island and South Island. Vasco Da Gama is said to have landed here first, Harsha says. I secretly hoped that it was cooler weather when he did.

We walk towards the northern point of the island, where the huge basaltic columns spring from the Arabian Sea like giant, disproportionate Kit-Kat bars. On these bars perch selfie-taking vacationers. I look down at the sand only to find that it isn’t sand at all, but sea shells! Miles and miles of sea-shells dot the coast, sparkling like grains of rice and millet under the sun. Most of them are fragmented and broken. I scrape the ground with my foot to see if it would reveal a layer of sand below, but I just find more and more seashells. I climb one of the rocks (more slippery than I had imagined). From here, I look at the irregular and peculiar rows of rocks jutting out from the island, and it reminds me of a Cambodian temple:an Angkor Wat rising form the sea.

Towards the west of the island, the grey-brown rocks are closely packed together in hexagonal shapes. Layers of rocks are stacked on top of each other, giving rise to a multi-level platform. The face of the rocks join together to form a mosaic pattern, that of a honeycomb or an ant’s eye. At the bottom of the plateau, the rocks are covered in hundreds of barnacles. As we walk to the next level, I see little rock pools in hollows and dents where the tide reaches. Crabs lay sprawled out in the sun in the pools. I find a good spot to sit, while Harsha climbs all the way to the top level of this pyramid-like structure. I watch him shrink until he becomes a tiny toy person on top of a gigantic structure. “Felt like Pride Rock,” he says when he returns.

We sit on the sands and observe the waves moving in and out, frothing and swirling around the hardened, ancient lava. I think about how at some point these rocks had also been in liquid form and how impenetrable they seemed now. The colours of the waves change as they approach the land: from deep green to pale, translucent blue, from shadow-grey to pearly white. I notice that a rock-platform in front of us is in the shape of a Komodo dragon, its hexagonal pattern not entirely unlike the texture of lizard skin. I imagine it heaving itself up and taking big clumsy steps. The unforgiving sun is making me hallucinate.

We walk around the island, stopping at places where the rocks make corridors, tunnels, controlling how much of the sea can come into the land. A sandpiper makes its way in a clear straight line, picking at insects and molluscs, oblivious to us. As we approach a pebble beach, we stumble on a strange sight. Interspersed among the smooth, round grey stones lie large white structures. Bones! Harsha picks up a long curved bone and brandishes it like a sword. We later find out that it is a turtle rib bone. A cuttlebone, broken in half,  lies in a corner. A few steps ahead: a perfectly shaped wishbone! Various joints surround us: it’s hard to tell what they might belong to. As if on guard, a black kite circles us overhead. Did it think we were potential thieves? Was there more to discover, was this its loot? We return the bones to where we found them and move on.

I had noticed that overnight stays were prohibited on this uninhabited island and felt a twinge of curiosity. What would it be like to spend the night here, among bones and hungry birds of prey? What was this place like after sunset, during high tide? I will never find out.

We hear the last call for the boat taking us back to Malpe. As we walk back, I’m pleased to see that the “No Plastic” boards on the island seem to be working. A young boy sits on the shore, tipping the last few drops of coconut water into his mouth directly from the coconut: no sign of straws on this strip of land. A little egret, its yellow feet against the black rock, surveys the beach for a snack. Would it be a crab, an insect or fish? On this island, it seemed to be spoilt for choice.