It was early April, and I’d just quit my job after a prolonged burnout. I was in St Ives on my own, walking the South West Coast Path along the Cornish coast. Walking had become a bit of a mind-cleansing ritual for me: I was learning to slow down and step back, even as I moved forward.

It was a cloudy day (but with “sunny intervals”, the Met Office had promised). I made my way to the railway station, where the walk starts. Porthminster beach was empty, the sky was overcast, but the sea was still a light blue-green. As I followed the acorn “Coast Path” sign, it didn’t take long to leave St Ives behind, which formed as a picture-perfect postcard every time I looked back.

The paved path was fringed with tall bunches of cow parsley and fresh snowdrops. To my left, I had a view of Porthminster beach, through leafless trees growing beside the train line. Memorial benches appeared at regular intervals, featuring poetic inscriptions. I have never passed by a bench without stopping to read the inscription and wondering what the person might have been like, what kind of life they had, and how lucky they were to continue to connect with the world. One verse I particularly liked was:

“Don’t you worry my dears,
because all the worry in the world
won’t make it right.”

The path gained ascent as I approached Carbis Bay. I was feeling quite triumphant: this walk was really as easy as I had read it was. Carbis Bay is full of fancy resorts, many of which feature hot tubs and swimming pools. Out in the waters of the bay, a lone paddleboarder rowed himself out into the ocean. A tiny black figure in an ocean of blue.

It was threatening to rain any minute, and my phone battery was almost drained. But I was still quite upbeat. My feet were on soft ground now, as the path wound itself around the cliffs lining the bay. This offered a panoramic view with St Ives Head to my left, and the Godrevy lighthouse to the right.

At the edge of a cliff, I stopped for a few minutes to observe the seascape. The water was silky, the waves like spools of white fabric being rolled up gently. A column of luminescent blue appeared in the middle of the water, reflecting an opening in the sky. I looked at it for a long time: the larger the patch grew in the sky, the larger the patch in the water grew. The brighter the sun, the bluer the patch. It was something that would be dismissed as unnatural in a painting, but yet here it was, in reality.

Interesting rectangular shapes made by the waves

On the beach, the tide had formed furrows in the sand, leaving neat, rectangular patches. Gulls soared above quietly. I came across another memorial bench, which quoted C.S. Lewis:

“Her absence is like the sky,
spread over everything.”

I wondered if I would one day be as lucky as to be that immortal.

The sky became darker and thick with cloud. I walked on. My phone had died a few minutes ago and my power bank refused to work. After a few minutes I met a lady who was walking in the opposite direction with her young son. She pointed at her trousers and shoes, which were caked in mud and said, “I have to warn you darling, it’s awful from here on.” She was right. It was here onwards that the road got really tricky. I was wearing trainers that were completely unsuitable for any kind of wet ground. I had also not realized that the path, now much narrower, involved some steep-ish gradients. Steps cut into the path were covered in squishy, slippery wet mud from the previous day’s rain. I put one foot in and skid, just about recovering my balance on time. I held on to the branches of the trees where I could, moving unsteadily for what seemed like miles. It was probably only for a few hundred meters. A group of four men and women were walking towards me, also looking very unprepared. They stopped in front of a large and deep puddle of muck, with me on the other side. I reached out my hand to one of the women. She gratefully took it. I helped the others cross as well, while holding on to branch of the tree.

It started to rain then, in big heavy drops. As the group walked on, one of them turned back and said, “Are you sure you’re going to be OK?” I nodded. “I hope you at least have a phone,” he replied. This made me suddenly doubt my confidence. There was absolutely nothing to fear: I just had to follow the path all the way through. I didn’t need a phone or a map: there was just one road. But someone being worried about you makes you a little worried for yourself. I tried to focus on the view of Porthkidney Sands up ahead: it was a beach so full of sand that it seemed like a mini-desert. I hobbled along like a penguin, learning to place my feet at angles in the mud to avoid slipping.

I crossed several hikers on the way, all of them wearing inappropriate shoes, grumbling about the mud and rain, doing the penguin dance. White and yellow primroses sprung up on the sides of the path and raindrops rolled off delicate white allium flowers. I stepped aside to let a family of four through. The youngest boy had a huge smile on his face as he held up his hand to show me what he was carrying: a snail almost as big as his palm. 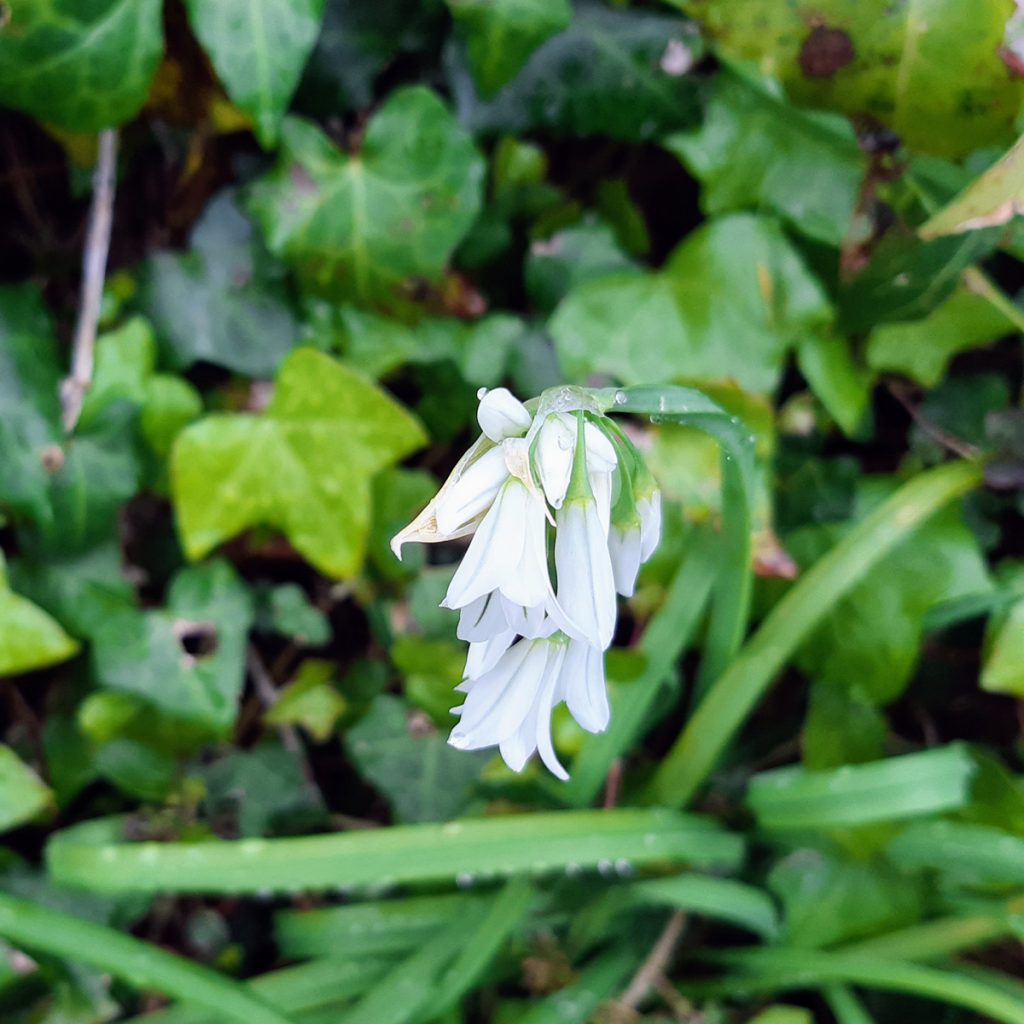 After what seemed like ages, I seemed to be on firmer ground. I was relieved: the worst was over! The path now ran along the top of sand dunes. Marram grass grew in long, spiky bunches, swaying in the breeze. I took off my jacket and sat on the grass, looking at the darkening sky over the horizon. In spite of the light mist, I could still see the Godrevy rocks clearly. There was a way down to the beach from here: may be nice to take a dip in warmer weather. The silence was interrupted by strange, loud tapping noises. I saw a group of birds sitting on the gorse bushes. Black heads, white collars, red breasts. Stonechats! It mesmerizes me how in the moments you think you are truly alone, a bird or two will turn up. 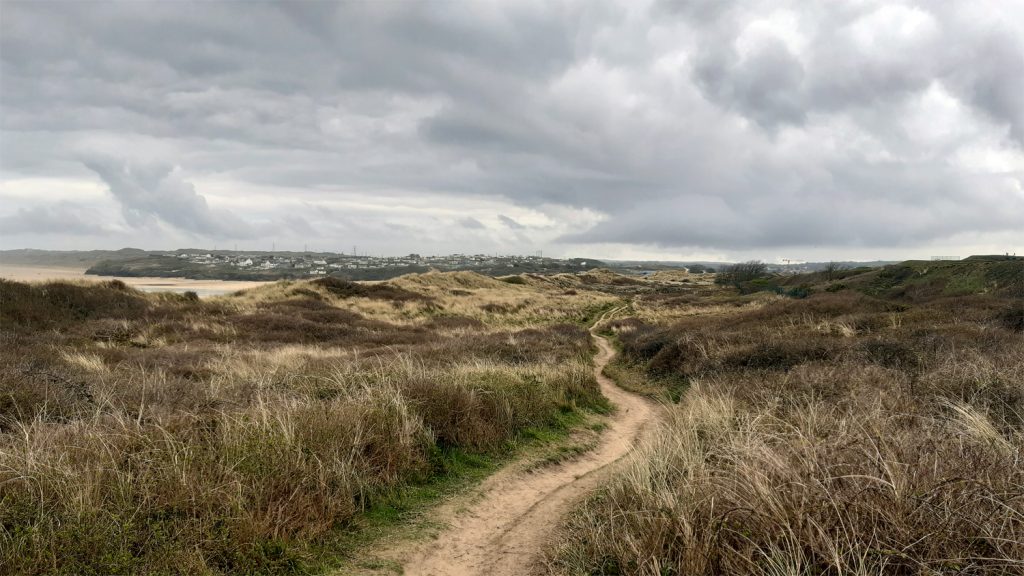 I heard a hoot and realized I was close to the railway track. I watched the train go towards St Ives and waved excitedly though I couldn’t really tell if anyone was waving back, I also hooked my phone up to my power bank, which had now decided to work. As I resumed walking, now sweaty with the growing humidity, I could see the St Uny’s Church in the distance. Yes, I was getting closer! The path curved away from the coast into Lelant, taking me through the West Cornwall Golf Club. There were warning signs everywhere about watching out for golf balls coming your way. I found them very amusing: surely there was really nothing I could do if a golf ball was going to come out of nowhere and whack me on the head. It seemed like a terrible way to die or lose an eye. I walked hurriedly with my hands to the side of my head (really), wondering if this was going to be the disastrous ending to my trip. Ah, good old anxiety. It had been quiet for a few hours but wanted to remind me of its presence now.

Thankfully I made it safely to the church yard, where I sat down on a bench under a tree. Blackbirds chirped all around me: their song so familiar to me now, so welcome. Goldfinches twittered in the trees. Bluebells lined the hedges. Opposite the church a “Living Churchyard” sported a colourful display of native wildflowers.

Walking through the streets of Lelant I came across a photographer on the road, aiming his camera at a robin sitting on the gate of a garden. I stopped quietly, waiting for him to complete the shoot. He clicked a few times, and then walked towards me smiling. Wordlessly, he showed me the photo. A close up of the robin’s furry head, against a blurred green background. You could literally count every feather! It was his way of saying thanks. “It’s lovely!” I gushed. He smiled like he’d just won a prize.

I made my way to Lelant station, which comprised a single platform overlooking a marshy area full of gulls and ducks. I thought I was the only one on the platform, but after a while, I noticed a man siting in a corner dusting his boots, which were covered in mud. “I see you’ve come the same way as me,” I said, grinning. We chatted for some time, and he left to continue his walk up to Lelant Saltings and onto Hayle.

The train arrived shortly, and I waved frantically at the driver to stop but she didn’t. If you come across this advice online about waving to train drivers and decide to follow it, like me, you’re only going to look foolish. The next train stopped though, as scheduled. From my window seat, I saw a group of four people walking on the dunes, waving at me, and I waved back to them, hoping they could see me.

At St Ives station, I got off and treated myself to a blueberry ice cream (which came with the standard Cornish warning, “Watch out for the gulls.”). I complimented the shop lady on her glittery star-shaped earrings. I leaned against a wall (apparently this helps prevent the birds from stealing your food) and ate my ice-cream.

I’d made it. Ramya of the wobbly knees and unsteady feet had just stumbled her way through the five miles from St Ives to Lelant. Someone who’s always had trouble with balance had held her hand out and helped five people cross a muddy path. I’d got drenched in the rain, I’d shivered in the cold, and – the biggest achievement of all – I’d managed to avoid being killed by a golf ball. Ha!

“They’re from Etsy,” a voice said suddenly, and I jumped. I looked up to see the shop lady with the starry earrings smiling at me. “E-T-S-Y,” she spelled it out. “Look it up! And do you know what? It cost just four quid! You can find the most wonderful things on the Internet.”

I thanked her and watched her bounce back to the shop, dress flowing, earrings glittering, saying “Mind the gulls” cheerily to a young boy as she handed him an ice-cream. A happy moment. I walked back up to the Malakoff bus stop. The mud on my shoes had dried up now and was falling off in clumps. I sat on a bench, took off my shoes and thwacked them on the ground. Yes. Goodbye burnout. Goodbye job stress. Good riddance to you, you muddy lump of All Bad Things. The sky was blue. Porthminster beach dazzled under the sun. I had a lot more walking to do.

Little blue tornado on the St Ives to Lelant walk 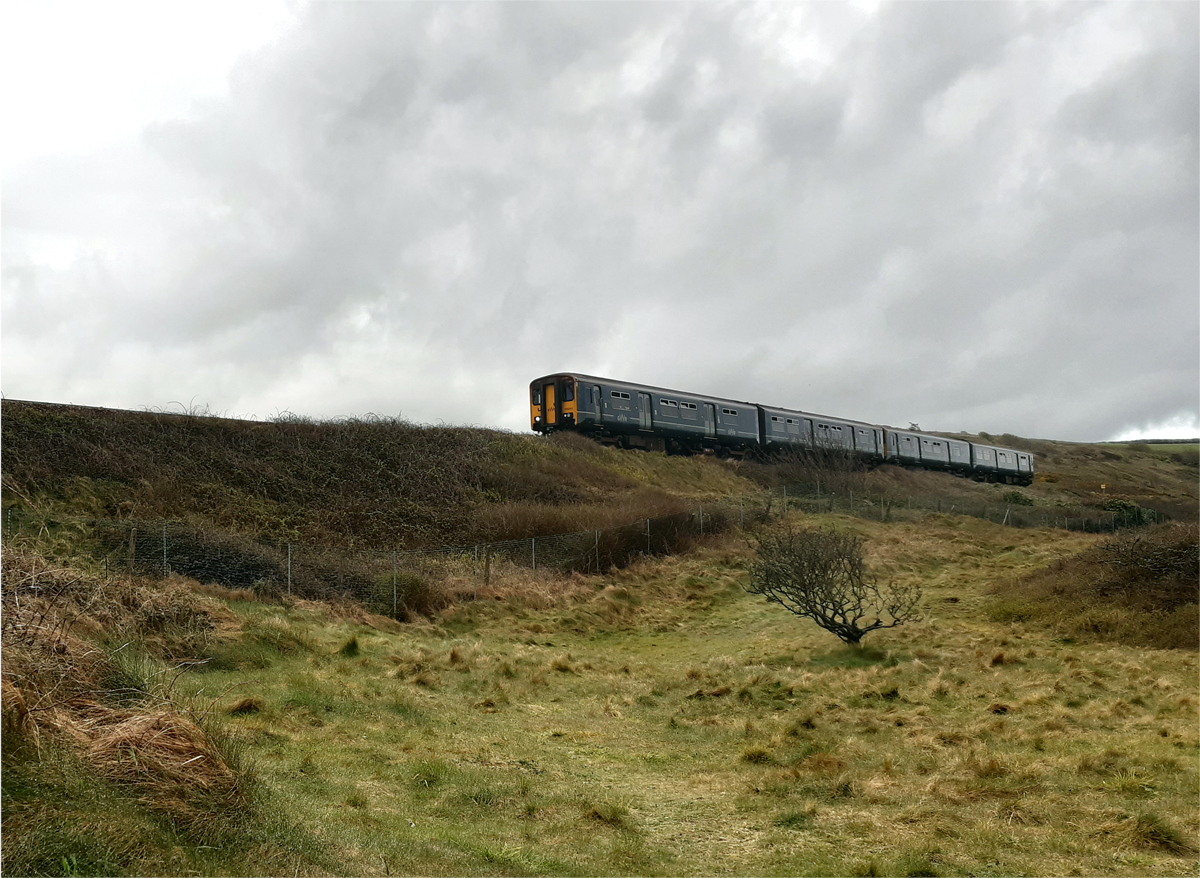 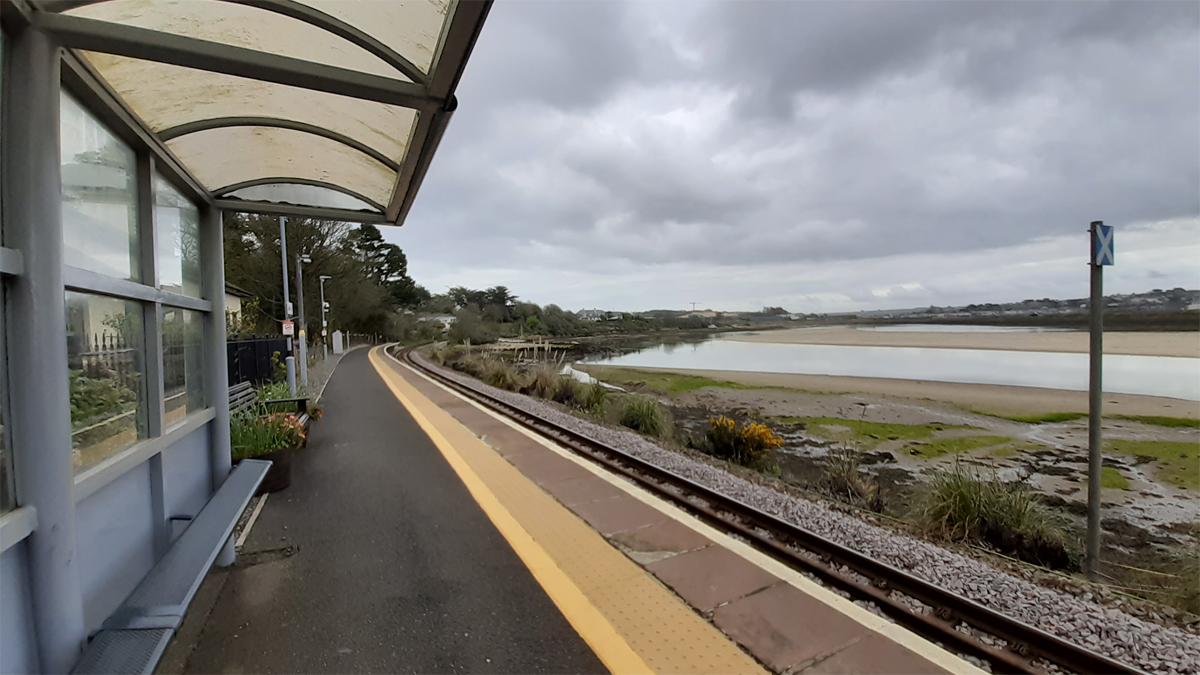