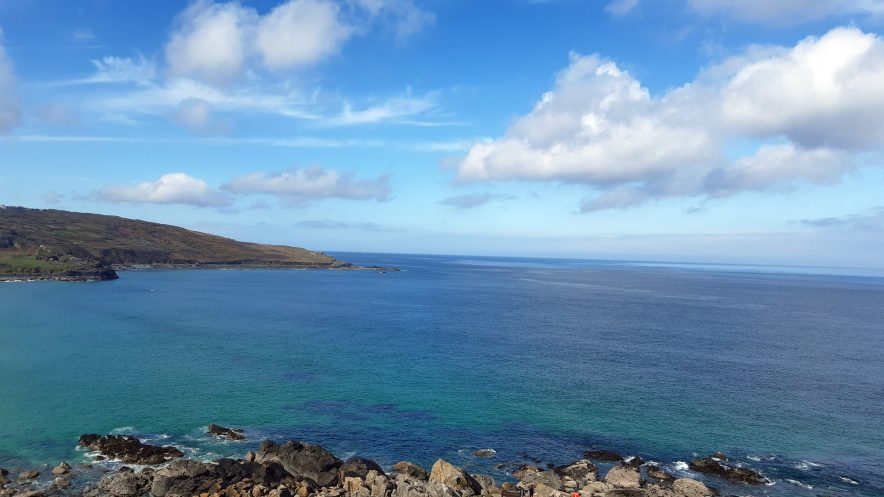 A bit of a ramble around St Ives Island, Cornwall

My biggest moments of epiphany have been on hilltops: I seem to have a tendency to become wiser with increasing altitude. And St Ives Head was no exception, even though it was just a small hill. I was in a Cornwall with a mission to slow down, after having quit my job a few weeks ago. All I wanted to do was to sit by the sea and watch the waves.

The sky was heavy with clouds as I made my way to the Island. I walked through narrow streets lined by whitewashed cottages with blue doors and angry gulls squawking from their rooftops. The gulls I’ve seen in coastal England are always angrily squawking about something, quite a contrast to the relatively docile gulls of my riverside Cambridge neighbourhood.

As I approached St Ives Head, I realized that the hill was much prettier than it looked from afar, as it overlooks Porthgwidden beach on one side and Porthmeor on the other.  A lone paddleboarder (some kind of running theme here, also seen on my walk from St Ives to Lelant) was silhouetted by the sunlight filtering through the dark clouds. I walked up the grassy slopes to a white cottage perched on the edge of the hill: the National Coastguard Watch. All around, the sky and sea danced in ripples of grey and white. It was early morning still, and the mist was just lifting. 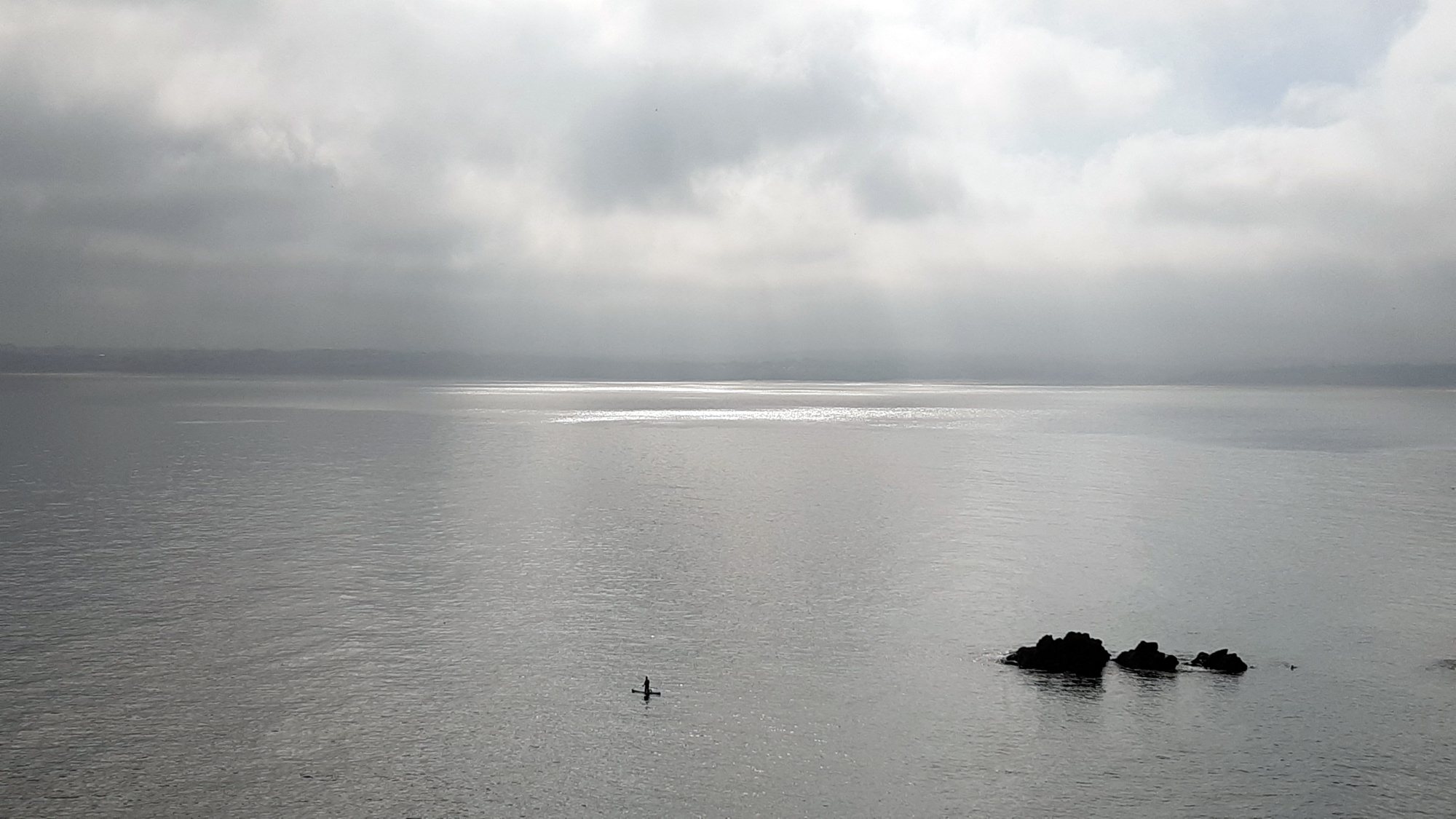 Perched on top of the hill was St Nicholas Chapel, a stone monumet that looked like it had withstood a gale or two. I found a bench just below the wall of the chapel on the other side of the hill, overlooking Porthmeor beach. The sea stretched far into the horizon, a line so faint that you could barely tell the distinction between water and sky. I could see all the way up to Man’s Head and Clodgy Point, where the waves crashed dramatically against the rocks, white foamy spray and all that. I scanned the rocks below me with my binoculars hoping to catch sight of puffins or perhaps even skuas, that I’d seen before in this area (in Cape Cornwall). But I only saw a pair of cormorants.

Porthmeor beach is a surfer’s paradise. Amateur surfers in black wetsuits dotted the waters, balancing themselves on boards of yellow, green and blue. I watched one person keenly – perhaps he stood out the most because of his bald and shiny head. He paddled out into the sea with his hands, lying on his board. He then sat up on his knees, waiting in anticipation as a huge wave came towards him. Unfortunately, by the time the huge wave reached him, it had reduced considerably to just a ripple. But he rode the little wave undeterred and paddled out again. 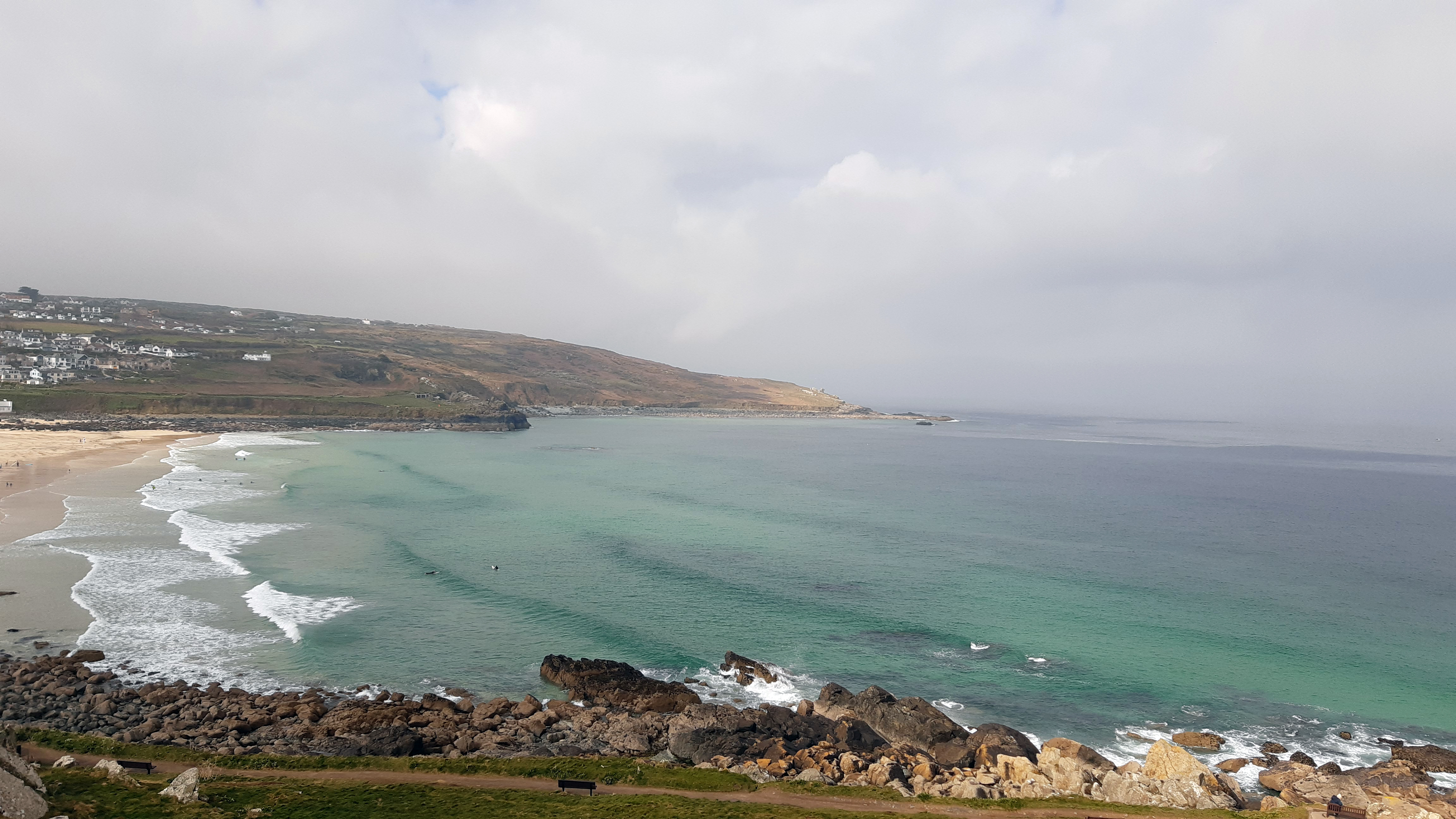 As the sun rose higher in the sky, I noticed how it dictated the colours of the the landscape. Streaks of brown and grey and green appeared in what had been a fairly uniform turquoise sea just minutes ago. I realized that sea and sky never follow the rules that are taught to landscape artists. If I painted what I was saw, it would look completely unreal, and an art teacher might say something like, “The colours don’t look right,” or “It’s not really coming together.” We’re taught to believe that nature has order and symmetry and follows some basic protocol. But more often than not, nature is completely random. Even something simple like the colours of a sunset are rarely consistent.

I wondered if it was nature’s way of rebelling. Maybe the light just wanted to trick us today, burdened by the weight of putting on a consistent as-expected performance. And wouldn’t I know all about it?! Ah, the pressure to deliver. On the days you want the sun to be out the most, it hides behind the clouds. Well. If the sun could go on strike, so could I. 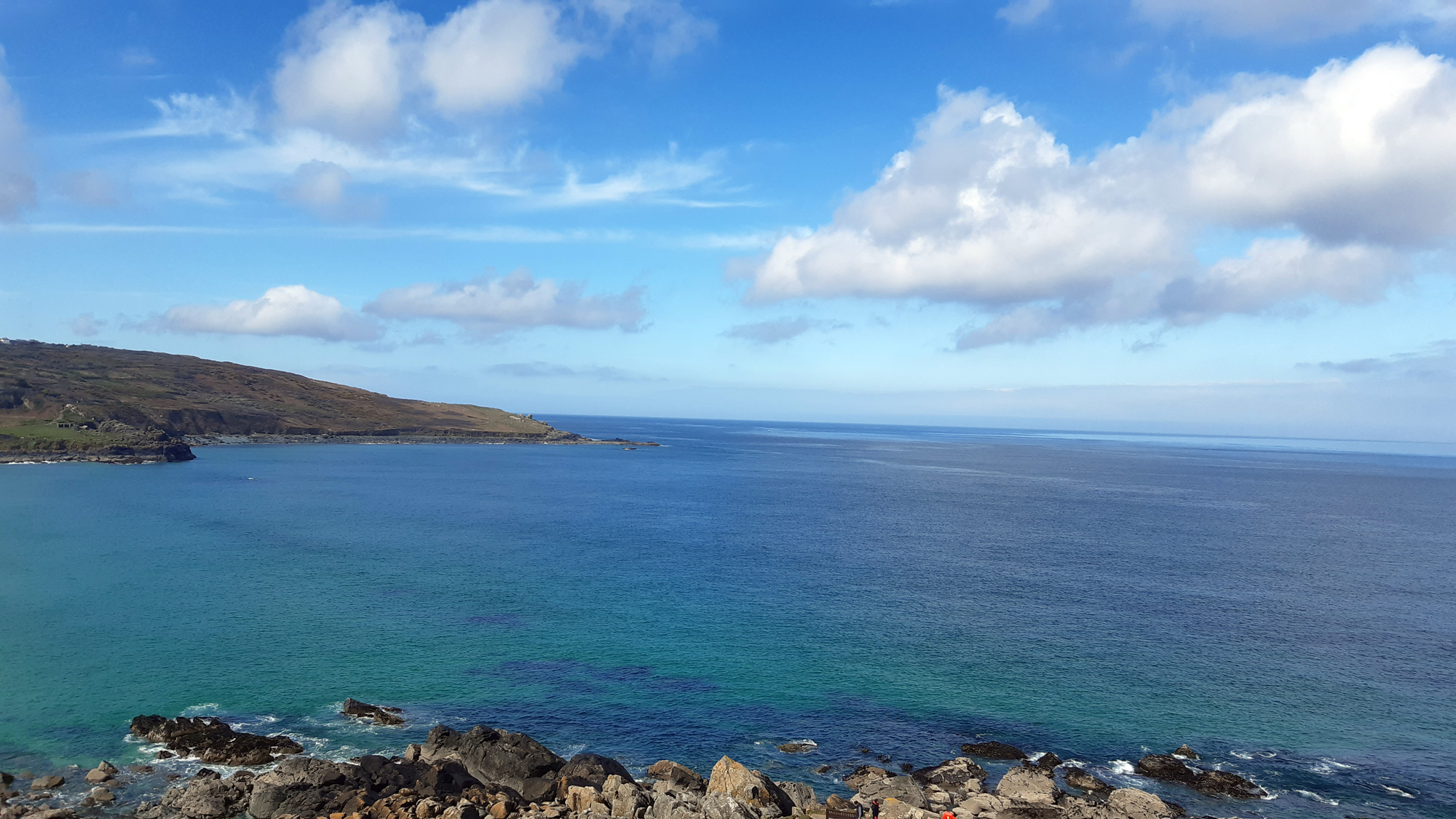 Porthmeor shades of blue. Note the difference in colours from the previous photo, taken just over an hour before!

At the foot of the hill, I noticed how the waters swirled around the rocks furiously and ceaselessly, dissolving into white spidery patterns. It seemed like the fury of the ocean broke here, in the few metres close to the shore, whereas the farther, deeper waters heaved gently as one. I had once been the big wave, I thought to myself, heaving with energy and zeal, but when I reached the goal, I was exhausted and falling to pieces, crashing and burning.

After staring at the water for hours, I realized that sitting here, observing the rise and fall of the waves was a luxury in itself. Time is available in plenty but afforded by very few.

It is strange how much of nature we can see but can’t touch or hold or keep. The waters came together and dissolved, created shapes and broke form repeatedly. Maybe that’s why the sea is so fascinating: it is ever-changing. It’s not going to look the same the next minute. And because we see it happen in front of our eyes, it’s easy to accept. It’s so much harder to accept change within ourselves, especially when we seem largely constant every day, trapped in clumsy bodies that, unlike water, don’t allow us to flow into whatever space will contain us. We’re awkward beings, with all of our thoughts and emotions crammed into a physical entity with finite limitations. No wonder we burn out. We can only hold so much. 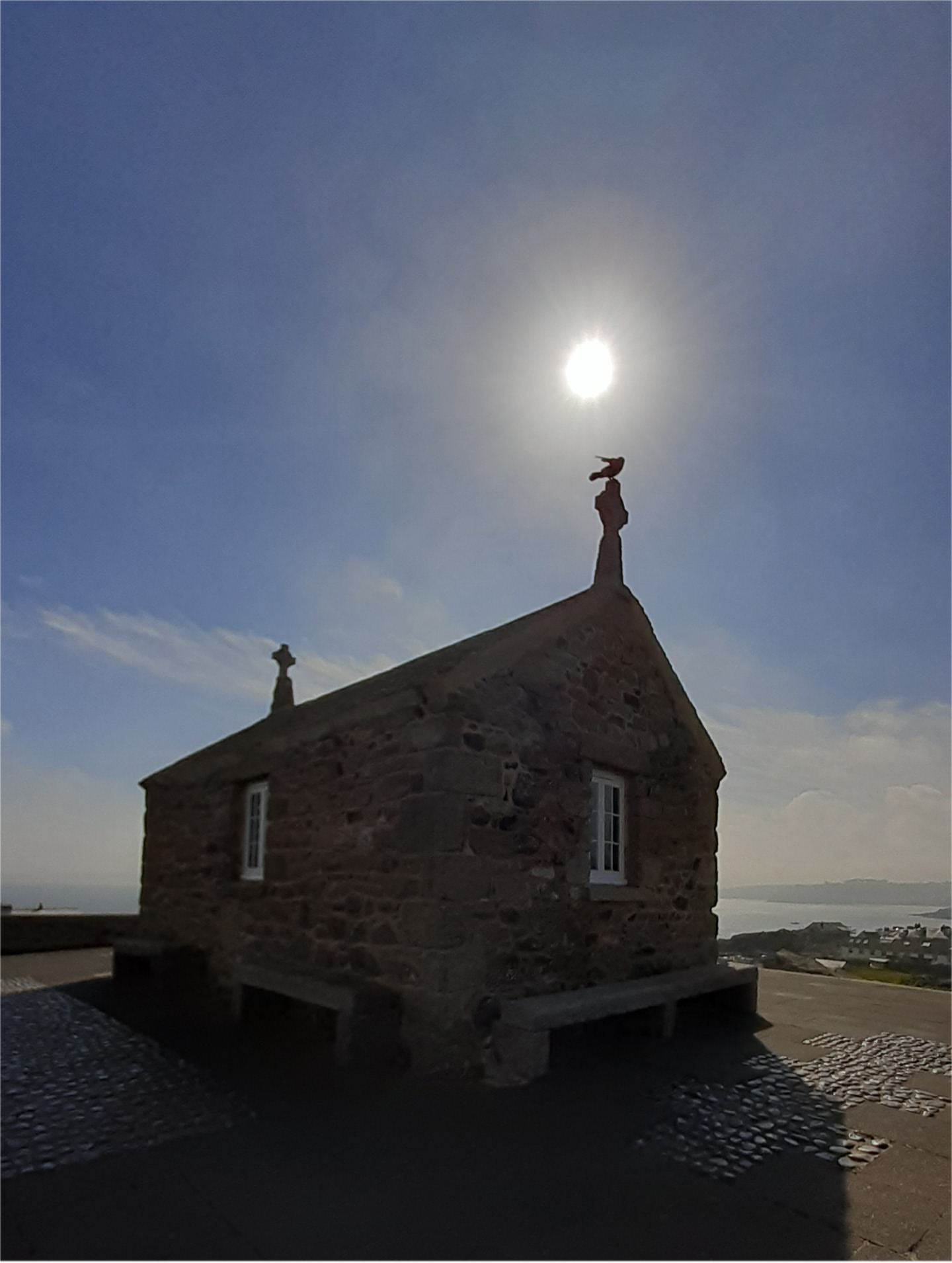 Feeling cold having sat in one place for so long, I got up to stretch my legs and started walking around the church. I peeped inside the closed window to see a small room with a desk, that displayed a notebook, a pen and a bottle of hand sanitizer. Simple. I heard voices and looked up to see a lady in a red dress leaning against the chapel wall, posing for a photographer. She was laughing, her gold earrings shining. A man in a suit walked towards her, followed by a man in a clerical collar. A young boy in a bow-tie walked with them, holding a bouquet of flowers. That’s when it struck me–a wedding was going to take place here today! What a beautiful setting. I decided to give them their privacy and went back to my spot on the bench.

I was just in time to see the bald surfer standing on his board, arms spread out, riding a wave like he’d been surfing all his life. I almost felt his delight as he soared to the shore, and celebrated his triumph by padding out once more. The tide had picked up, the waves were stronger, all his practice was paying off. It was his time to shine.

The clouds had gone from being thick and billowy to thin wisps of white, the kind you see when poaching an egg. As it got warmer it seemed like all the species of gulls were out. It’s astonishing: the variety of gulls. What I’d previously called “seagulls” I now knew as black-headed gulls, European herring gulls, common gulls, black-backed gulls. More cormorants gathered on the rocks. Some of them spread their wings out in the “Batman” pose: something I’d noticed on a trip to India recently. It was incredible to see the same behaviour in birds that were thousands of miles apart.

I was interrupted by the chirping of a starling that sat a few feet away from me. I noticed its iridescence in the sunlight. Isn’t it amazing what sunlight does to the colour of bird feathers?  Starlings, magpies, ravens, all of them glisten in the sun. Just a few minutes ago, the bird was an unassuming black, but now it was had flecks of luminous green and purple and gold.  I wondered if we all needed someone to shine a light on us to be able to glow.

I think what I really love about Cornwall is that it offers the big picture alongside the detail. You stop to look at wild primroses in the grass but you also stop to look at the unending blue all around. The expansive views seem to free up space in my own mind. At the peak of burnout, I noticed that I was constantly losing myself in the detail and forgetting the larger purpose. It helped to look up.

I could now hear music coming from the organ in the church: the wedding ceremony had begun. On a bench at the foot of the hill, by the coastal path, a boy and girl sat wrapped in each others arms. It was one of those moments when everything seemed to be in perfect synchrony. They were a tiny speck in my 360 degree view, but the fullness of their emotion was almost palpable. As I started walking down the path, I couldn’t help wondering if I was a tiny spot—if I was even detectable—in someone else’s panoramic view. 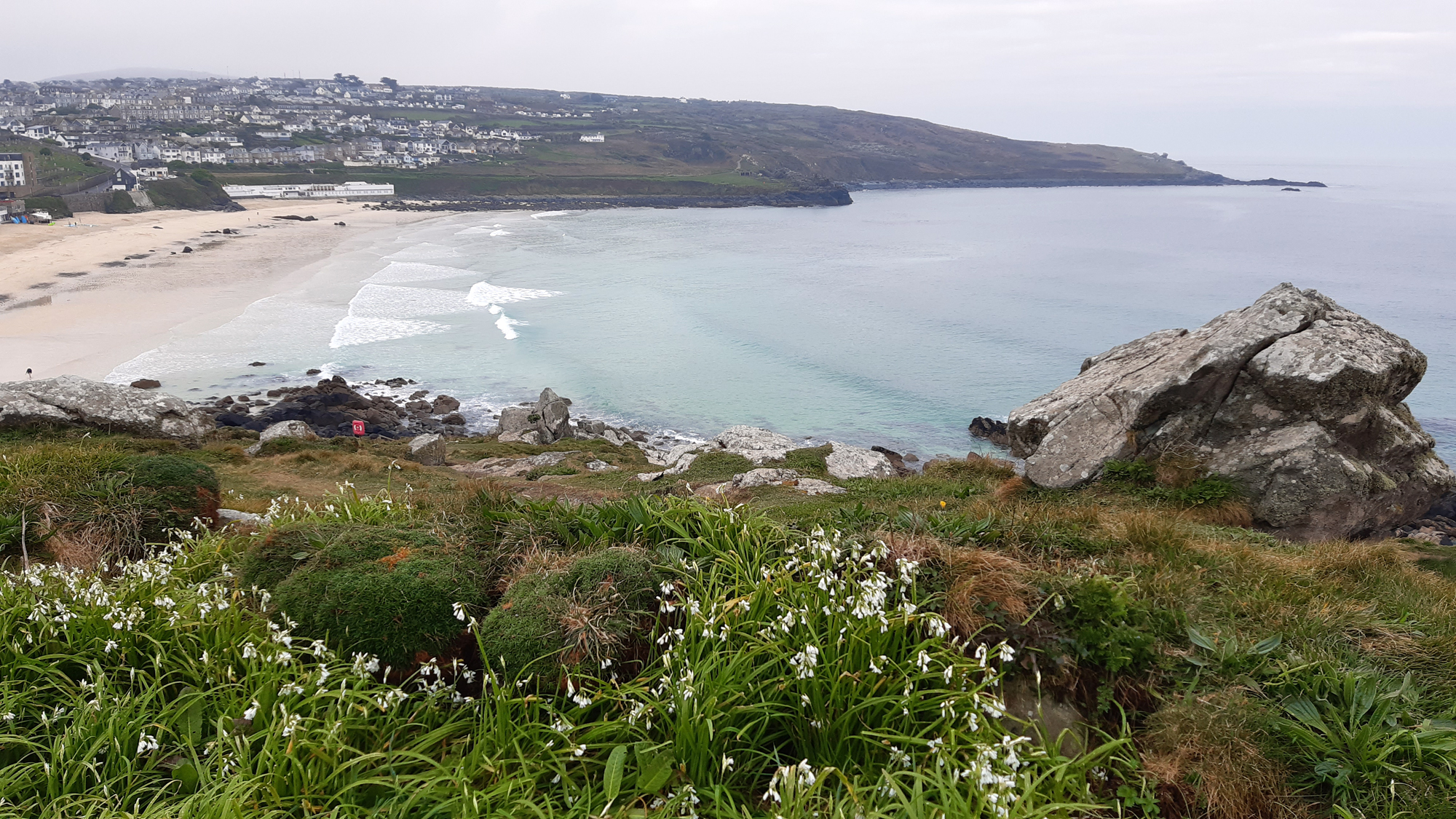 Three-cornered garlic, with a view of Porthmeor on an early spring morning 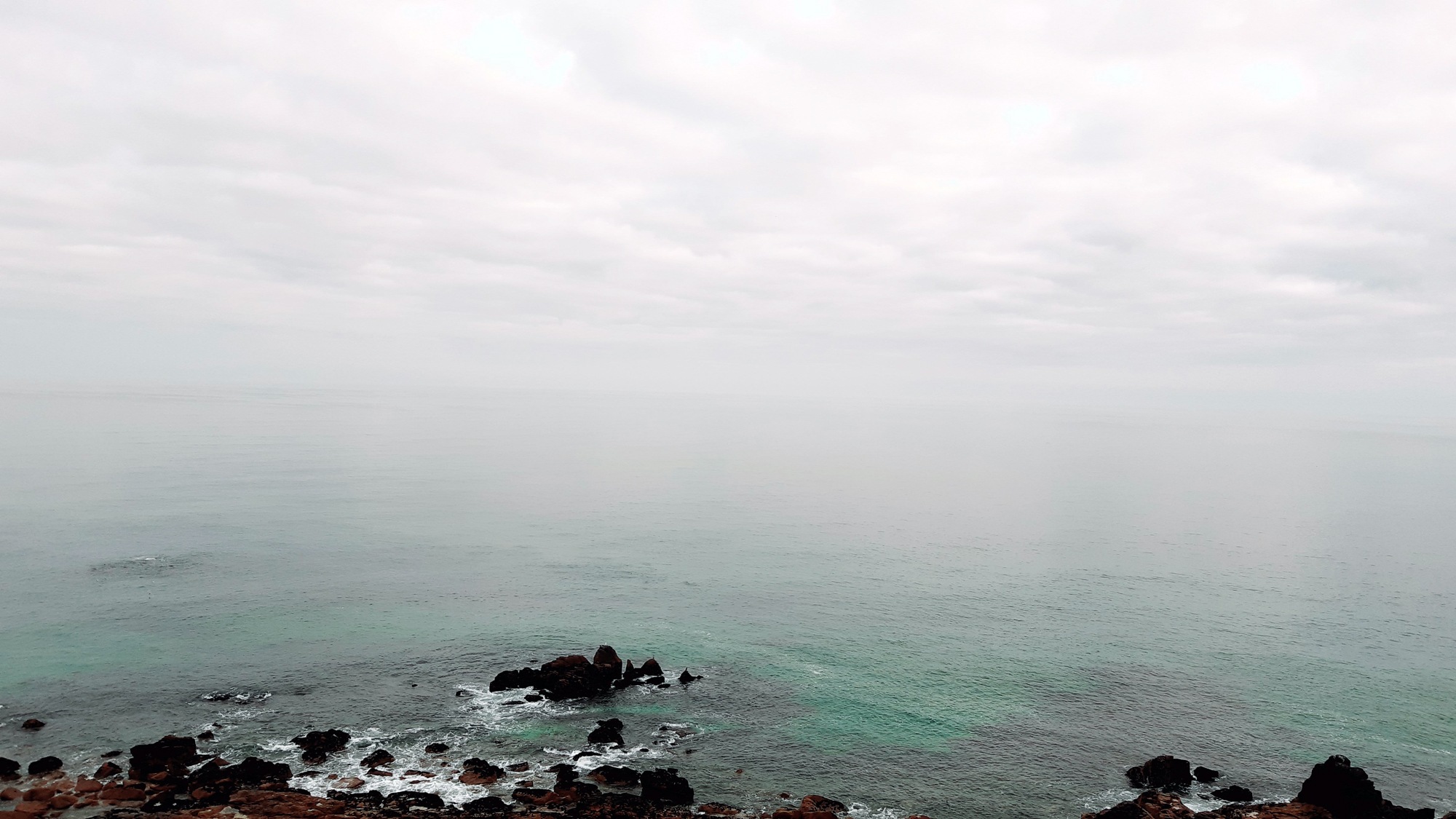