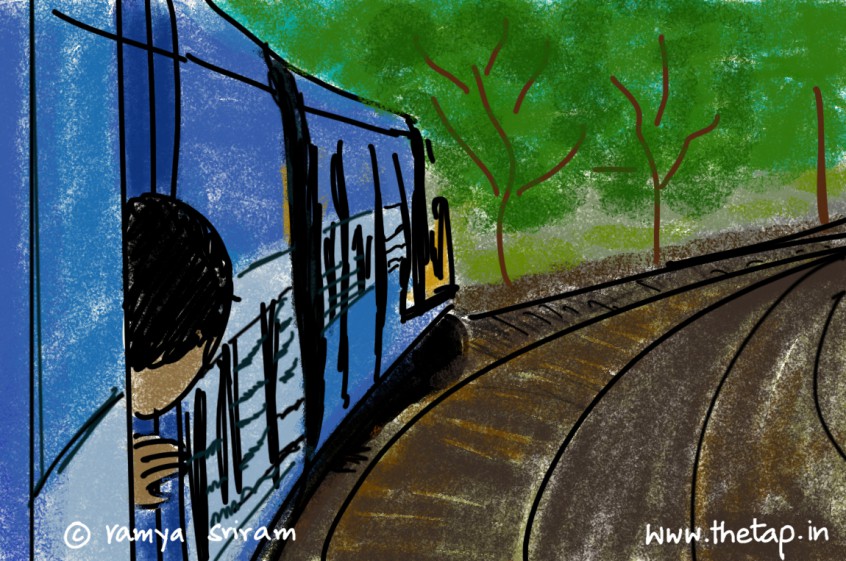 This story was first published in The Better India, on September 8, 2015,  titled: This is why I cannot stop travelling by Indian trains. Read it here.

The sun was pink and gold as it rose over the plains, getting bigger and bigger as the train sped through the fields. I was standing at the door of Trivandrum Mail, with the morning breeze on my face, watching the silhouettes of coconut trees lighten.

I’ve stood near the doors of countless trains, sometimes alone, sometimes with a friend or relative, and each time, it gives me a high that doesn’t quite compare to any other.

I have always romanticized Indian train travel. But nowadays, I constantly meet people who turn up their noses when I mention that I’d prefer trains, and the first thing they ask is how I can stand to use the loos (a valid question, at that). They think I’m crazy that I’d rather spend hours on a train than spend a similar amount of money on a quicker and ‘more comfortable’ mode of transport. I hasten to say that in this world’s lack of time, I find taking a train almost luxurious – it is a true means of escape.

My love for trains might have begun when I was a kid; when we were taken once or twice every year to long-distance train journeys. Of course the window seat was a treat, and if you saw the engine turn while looking out of it, the purpose of the entire trip was served.

But the real affair began when I was in college and regularly travelled in the trains’ general compartment between Chennai and Bangalore. It was then that I started noticing people around me (unavoidable when you’re shoulder to shoulder) and was fascinated by the insight into human behaviour that those train journeys provided.

My college had a railway track passing through the campus. For two years, my hostel room window overlooked the tracks, and my roommates and I soon knew which train to expect at what time, depending on the day of the week. We saw never-ending goods trains (the coaches of which I would count), blue-and-silver trains, red trains, trains with banian ads on them, and lone engines that chugged along. I think it was sometime around then that it actually hit me that there are so many people in India. Never once did we see a train with only a few people in it. They were always packed, with elbows sticking out of windows, people sitting and standing at the doors.

Sometimes, while walking to class, a train would pass by and I would catch someone’s eyes. I could not help but wonder about the stories of these people. So many stories must’ve passed us by; coal from Dhanbad, oil tankers, humble locals and powerful cross-country trains.

Travelling by sleeper class helps one understand the sights, smells and sounds of India and her people. Having open windows is a plus – looking out from behind a rain-stained A/C window doesn’t quite do justice. I also find the lack of privacy on sleeper coaches part amusing, part endearing and part annoying.

A few years ago, exasperated with the unrelenting Great Indian Staring Habit, I took it upon myself to outstare fellow passengers, who would look away only momentarily before resuming the activity. There’s no escape. You’re forced into either making conversation or very consciously avoiding eye contact.

There is a bewildering variety of people on trains whom I keenly observe to collect material for my comics and writing. There’s someone sprawled out with their luggage carelessly dumped all over the place, and then there are others periodically checking their chained bags under the seat. If there’s an uncle talking loudly over the phone, there’s a teenage girl whispering, clutching her bags.

Someone chucks food out of the window (something that makes my blood boil); someone else collects the trash and deposits it in the waste bin. There are tentative smiles that quickly grow into animated chats, there is the sharing of packed food, switching of berths and bonding over chai.

‘Native’ places are discussed, common ground is discovered, and everybody relaxes once the initial ice is broken.

Late comers usually enter with the ‘Which station is this?’ question, addressed to nobody in particular, and responded to by 4-5 people at least. In A/C compartments though, sometimes the curtains are closed and not much exchange takes place.

Being on a train somehow makes me get into long metaphysical conversations with myself – it gives me the time and mental space to think about where I’m going (figuratively).

It’s a zen-like zone to be in.

I once saw a lone farmer in the middle of an enormous field, with a little thatch roof and I suddenly wondered if that made him more Indian than I am. I feel a strong connection with India while I travel by train – perhaps because of the people I meet, the glimpses of seemingly impenetrable acres of land. Perhaps because of the station vendors selling food at the window.

Perhaps it’s because of station names that surprise me every time I find one that I hadn’t heard of before. Perhaps it’s the impulsive and sudden kindness of strangers. Perhaps it’s the rich landscape that ranges from dry deserts to lush green mountains. And perhaps it’s also the reality check and the questions that come with witnessing beautiful fields lead into dirty, trash-strewn town outskirts.

I feel more grounded when I travel by train (I can’t say the same about air travel). Of course there are problems, starting with booking the ticket to having to hurriedly alight with your luggage intact at a two-minute stop. Yes, there is much scope for improvement – a better website, cleaner loos (and a population that is more educated about hygiene), cleaner stations, safety measures, and a plethora of other things.

But the Indian Railways definitely has a charm of its own, one that I find irresistible. And I’m going to keep going back.