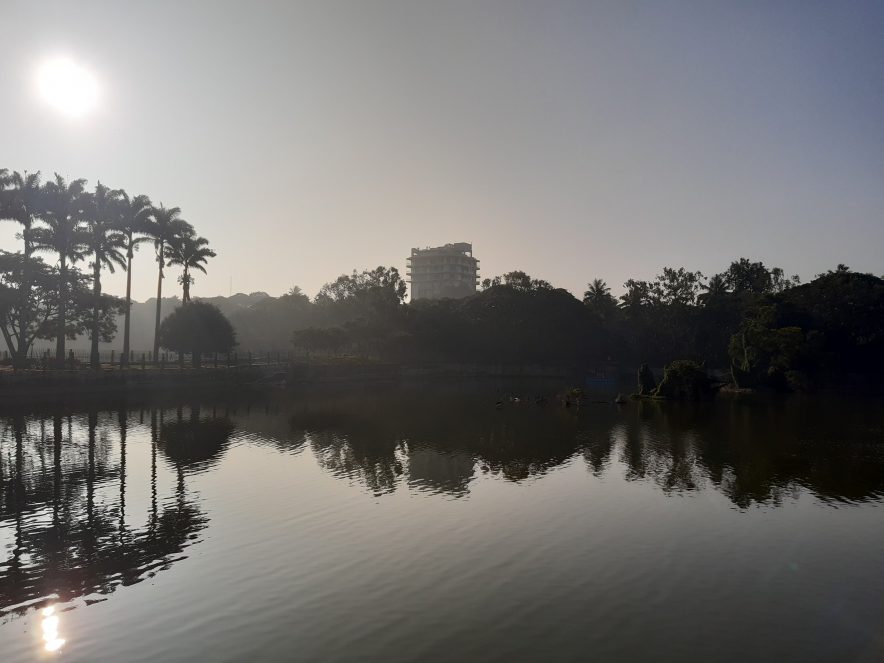 Making the idea of “escape” accessible on a morning walk in Lal Bagh Botanical Garden, Bangalore.

I woke up one December morning in Bangalore with a huge grin on my face. What a wonderful day it was to be alive. I was finally going to see a Spotted Owlet!

It isn’t often that I wake up with the mission of spotting a specific bird, but I had never seen an owl in the wild before, and was intrigued when Harsha (of Gundmi fame) declared that he could change this. A keen birder, he said he knew exactly where to look, and I was impressed with his confidence. We were going to go to Lal Bagh Botanical Garden, a 240-acre park in the middle of urban Bangalore.

We reached the park when the sun was just rising. We climbed the “Lalbagh Rock”, a hillock made of grey-black, stratified gneiss rock. (I later learned that it was 3,000 million years old!). We sat on the cool stone, watching pigeons bathe in the growing light. I’ve always had a soft spot for sunrises, but what I like best is how slowly and gently dawn breaks. You can’t urge it to hurry up. The sun will rise at its own pace.

We scrambled down the rock and joined the other walkers who marched briskly on the muddy path. They all looked very serious about getting their morning exercise in. We walked past impressive statues carved from the wood of fallen trees: an eagle made from a 200-year old “Nilgiri tree”, and a crocodile that looked all too real from afar. The damaged trees were carved by local artists after they fell in a 2017 storm.

We approached a small group of trees and Harsha suddenly paused. “Look up,” he announced. Ah, two words that always assure magic.

And sure enough, sitting on the branch of a leafy ficus tree was a spotted owlet, eyes closed. It sat absolutely still, looking like a small cuddly bear. As I stared at it, its white eyelids opened slowly, just a little bit. It evaluated us through two narrow slits, decided we were unworthy of its attention, and went back its Vipassana-like meditative state. A few passers-by came to see what we were looking at, but didn’t look surprised at all to find the owl: it was a regular sight for many. They did a “namaste” sign, bowed their heads and continued on their determined stride.

The breeze gently ruffled Little Goobe’s* brown-and-white feathers and rustled the leaves of the tree, but our owl was content, unbothered.

After a while, the owl decided that this was enough of a morning adventure and took off unexpectedly, flying into a hole in the trunk of the tree. From there, it peered out again, eyes half-closed. I smiled, remembering a story my father-in-law had told me. In the Uttarakhand village he grew up in, a spotted owlet would sit on a wire overlooking the village’s main street. At night, when someone walked past, it would make loud noises. This often alerted other people in the village of someone’s  presence, like a warning sign or an alarm. He recalled the bird as being called khaskoodar. Little kids would get scared when they heard the bird’s call, but the elder would say, “Hush, don’t worry, it’s not an ullu (owl). It’s only a khaskoodar!” Harsha showed me three more owlets, and I waited for them to call out but no luck.

We continued our walk, taking the path up to the large lake, watching parakeets feed on the ground along the way. When we reached the small bridge over the water, Harsha pointed excitedly: “Darter!” The large white bird dove and came up with a fish in its mouth, which it swallowed whole, the lump moving slowly down its slender neck, like a snake swallowing a frog. For a minute, I felt like I was watching this scene on TV. All around us, men and women continued to jog and walk in their shorts and white socks, many oblivious to the action happening around them.

Above us, a Brahminy kite soared, its wings silhouetted in gold against the late morning sun. The Brahminy kite is one of my favourite birds. I find it so incredibly majestic, and I love the rust colour of its wings. It swooped down to the lake, flying close to the waters, but didn’t find what it was looking for. Its white snowy head pushed through the air like the nose of a plane and it took off back into the sky. It’s a common bird in Bangalore, and one that I think is highly underrated. It’s escapes the notice of many, as it flies over human heads buried in phones. I assume that life is less interesting for those who never look up 🙂

I’d thankfully brought my binoculars on that day because what we were about to see was stunning. A group of about 25 cormorants landed in the water suddenly. For a few minutes frenzied diving and splashing followed: black heads ducking underwater and emerging triumphant, with fish in their mouths.

In contrast to the noise and activity happening in the middle of the lake, there was a quiet stealthy hunt going on along the edge. A pond heron walked by the lake on its tall, thin legs, taking careful and quiet steps. Snap! It dipped its head into the water to catch an insect. It looked almost comical, as its neck moved back and forth with each step, like the Walk like an Egyptian move. “Hey, look!” Harsha exclaimed. I followed his gaze to find a reptilian head popping out of the water. Water snake!

On an island in the lake, the cormorants now dried off in the sun after all their hard work. They spread their wings out like superheroes, a pose that I call “The Batman”. A grey heron in breeding plumage stood still next to them, white chest hair blowing softly in the wind. Red wattled lapwings stood in a row. I waited for them to make their characteristic, loud, “did he do it” call, but they were surprisingly quiet. Two little grebes sailed past us. I’d always thought birding was hard work, but this seemed incredibly easy.

Ever since I discovered birds, I have a new repository of bird-associated memories. The lapwings reminded me of the first time I saw them: in Udupi, flying out in a group from behind a large rocky hill near the sea. I’d seen grebes back in the UK, on a summer walk in the Spade Oak lake. I knew I’d remember this walk the next time I’d see cormorants or spotted owlets.

But one of my biggest surprises lay right ahead. We had almost finished our circular tour now, when I saw large white birds sitting on a little strip of land in the water. Ah, egrets. But wait, one of them looked different. A pelican?! I’d never seen one before! (I had to credit my instant recognition of the bird to Finding Nemo.) Through my binoculars, I could see the details of its eye: red, with a startlingly black bead in the centre. And next to the pelican stood a painted stork. I was elated: I didn’t have to go to Kokkare Bellur to see one! On the muddy bank of the river, I saw something purple moving. A grey-headed swamphen paced up and down, looking angry about something.

We took a bit of a detour on our way to the exit, stopping to take a look at the famous silk cotton tree. As I stood and looked at it, I suddenly felt like this was it. Moments like these seemed to contain everything I sought in the universe. “In spring, it’s full of white flowers,” Harsha said. I could only imagine how pretty it must be then.

We walked past the garden, where I was greeted by spider lilies that grew up to my height, and the fiery flowers of the Malabar chestnut tree. I paused under a gulmohar tree and looked up, wondering if I’d find another owl. But I was amused at what I saw. On a bare branch, a large black bird sat on top of another. Black kites mating!

I always find it heartening to catch sight of two animals mating: it feels like a confirmation that all’s right with the world. It formed the perfect happy ending to our little journey.

While I was thrilled to have seen spotted owlets and pelicans, darters and herons, the sight that stayed with me the most was that of the Brahminy kite soaring over the lake. I realized I didn’t have to stray too far to find something special. The walk around Lalbagh reinforced once again that to find something extraordinary, you just have to keep your eyes and ears open. I always equate “escaping” to physically moving as far away from my current situation as possible, but after Lalbagh, my “escape” has become a lot more accessible. With a little help from my friends, it’s getting easier.