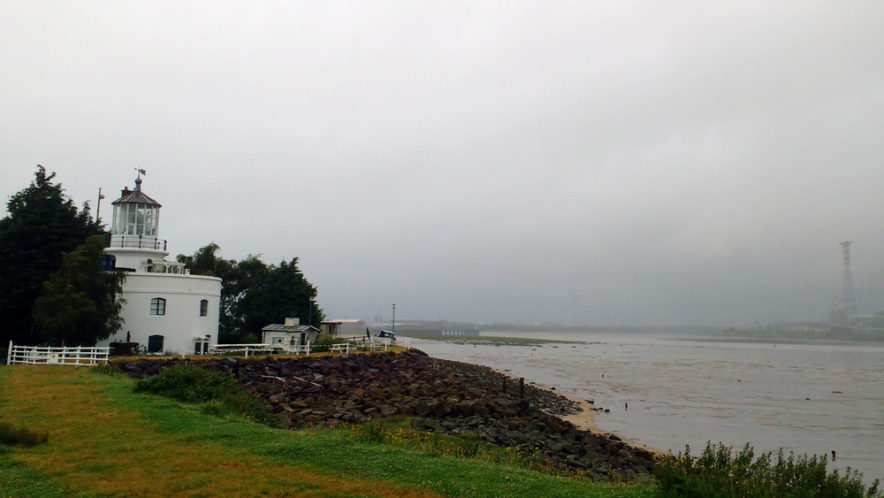 An article for National Geographic Traveller India about a stay in a 190-year-old lighthouse in Wales, UK. Scroll down to see the full text. 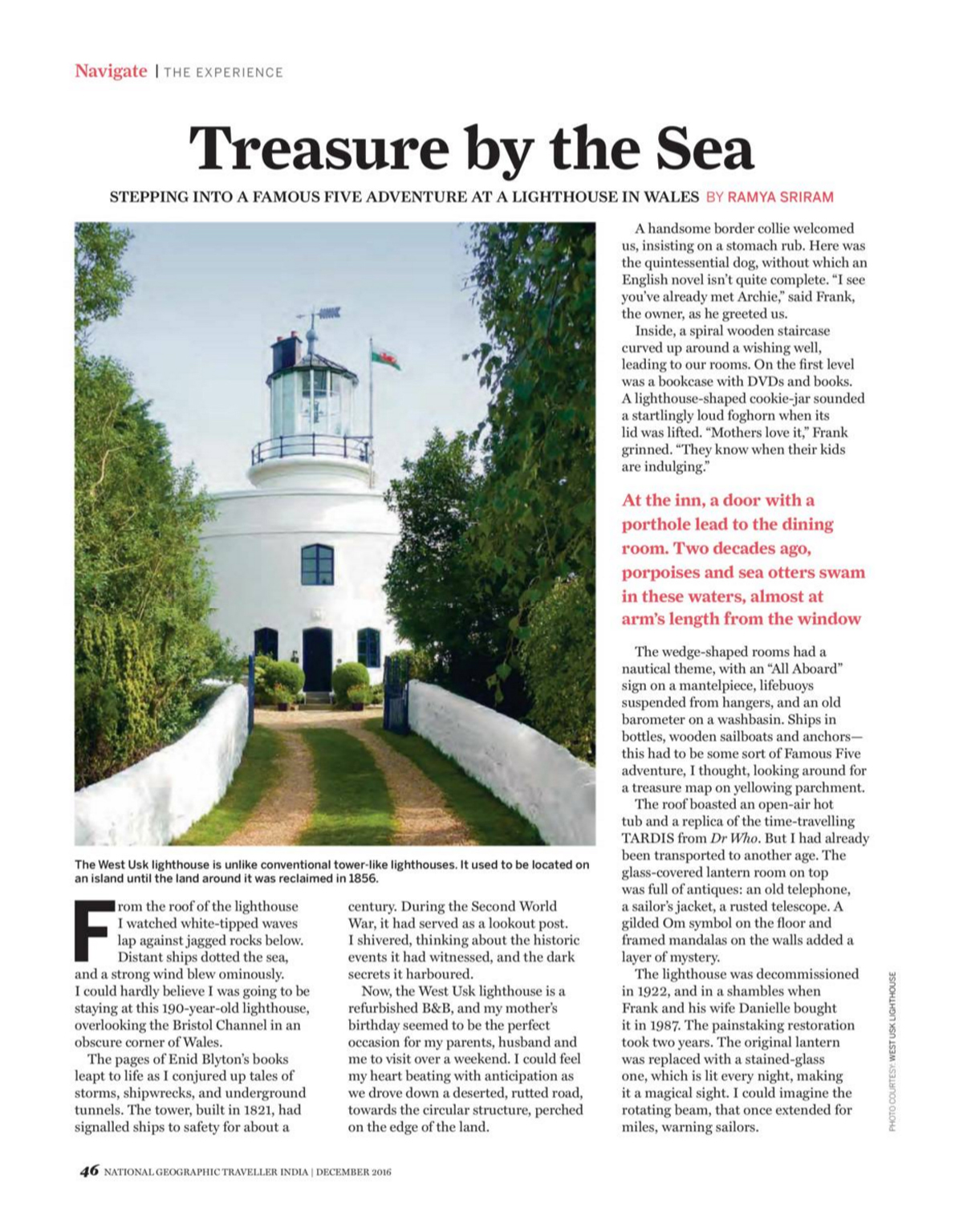 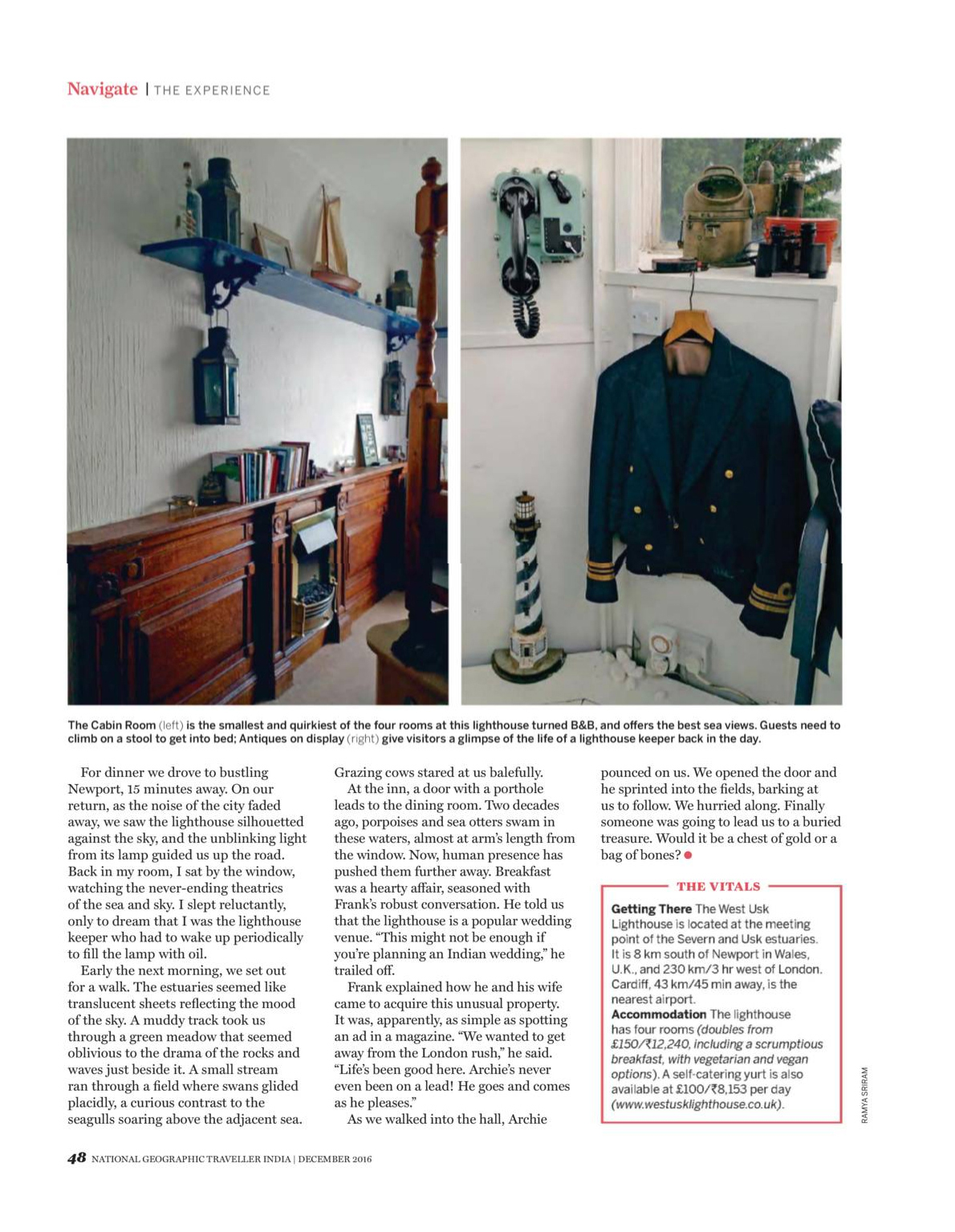 The tower of the West Usk Lighthouse has signalled ships to safety for about a century and served as a lookout post during the Second World War. Now run as a B&B by a couple (and their border collie Archie), this place holds the promises of historical secrets. I can’t wait to go back and find a treasure map!

From the roof of the lighthouse I watched the white-tipped waves lap at the jagged rocks below. Distant ships dotted the sea, and a strong wind blew against my face. I could hardly believe that I was going to be staying the night at this 190-year-old lighthouse.

The tower, built in 1821, had signalled ships to safety for about a century. During the Second World War, it had served as a lookout post. I shivered, thinking of the historic events it had witnessed, and the dark secrets it harboured.

Now refurbished as a B&B, the West Usk lighthouse sits pretty in an obscure corner of Wales, overlooking the Bristol Channel. My mother’s birthday seemed to be the perfect occasion for my parents, husband and me to visit over a weekend. I could feel my heart beating with anticipation as we drove down a deserted, rutted road, towards the circular structure, perched on the edge of the land.

We were welcomed by a handsome border collie that insisted on a stomach rub from each of us. There, this was the quintessential dog without which an English novel isn’t quite complete. “I see you’ve already met Archie,” said Frank the owner as he greeted us.

A telephone booth sat in a corner of the room. Peculiar, I thought, but it seemed to fit right in. A spiral, wooden staircase lead to our rooms, below which was a wishing well. On the first level sat a bookcase filled with DVDs and books. A cookie-jar, shaped like a lighthouse, sounded a startlingly loud foghorn when you lifted its lid. “Mothers love it,” Frank grinned. “They know when their kids are indulging.”

The decor of the wedge-shaped rooms held plenty of surprises. ‘All Aboard’, a sign announced from the mantelpiece. Lifebuoys hung beside wardrobe hangers, and an old barometer sat on the washbasin. Ships in bottles, wooden sailboats and anchors – they all found a place there. The more we looked, the more we exclaimed. I searched for a piece of yellowing parchment –  I was convinced I would find a map to some hidden treasure. This had to be some sort of Famous Five adventure. 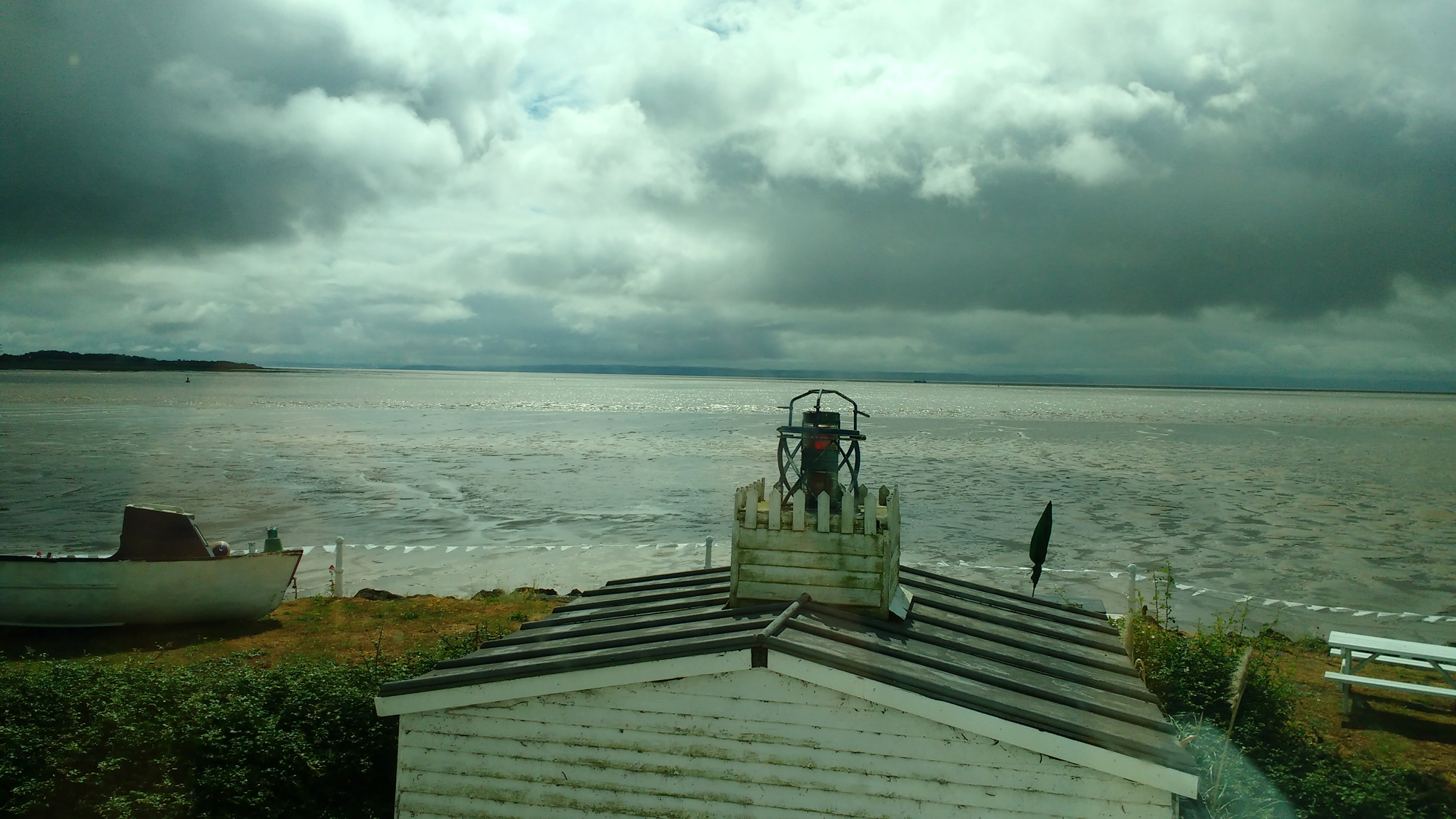 View from the room window

The roof boasted an open-air hot tub and a replica of the time-travelling Tardis from Dr Who. But I didn’t need a time travel machine – I’d already been transported to another age! The lantern room was full of antiques– an old telephone, a sailor’s jacket, a rusted telescope. On the floor was a gilded ‘Om’ sign, and framed mandalas hung on the walls.

The lighthouse was decommissioned in 1922 and bought by the couple in 1987 when it was in shambles. The restoration, funded by the English Heritage and Wales Tourism Board, took two painstaking years. The original lantern was replaced by a stained-glass one, which is lit every night. And what a magical sight it made! It was easy to imagine the rotating beam that once extended for miles, warning sailors.

Dinner was at bustling Newport, just 15 minutes away. All was quiet when we returned. I sat by the window, watching the never-ending theatrics of the sea and the sky. This was a childhood fantasy come true! I went to sleep reluctantly, only to dream that I was the lighthouse keeper, and had to wake up periodically to fill the lamp with oil.

Early the next morning, we set out for a walk. The estuaries seemed like translucent sheets reflecting the mood of the sky.  A muddy track took us through a green meadow, that seemed oblivious to the drama of the rocks and waves just beside it. A small stream ran through the field, where swans glided placidly, a curious contrast to the majestic seagulls that soared above the adjacent sea. We came across grazing cows, who stared at us morosely and threateningly. Unnerved, we hurried back to the inn. (“Friendly cows,” Frank told us later. “Just curious.”)

At the inn, a door with a porthole lead to the dining room. Two decades ago, porpoises and sea otters swam in these waters, almost at arm’s length from the window. Now, human presence has pushed them further away.

Breakfast was a hearty affair, seasoned with Frank’s robust conversation. He told us that the lighthouse is a popular wedding venue with space for 25 people. “This might not be enough if you’re planning an Indian wedding though,” he trailed off.

We asked how he and his wife came to acquire this unusual property. Frank said it was as simple as spotting an ad in a magazine. “We wanted to get away from the London rush,” he said. “Life’s been good here. Archie’s never even been on a lead! He goes and comes as he pleases.”

As we walked into the hall, Archie pounced on us. We opened the door and he sprinted into the fields, barking at us to follow.  We hurried along. Finally someone was going to lead us to the buried treasure. Would it be a chest of gold or a bag of bones?