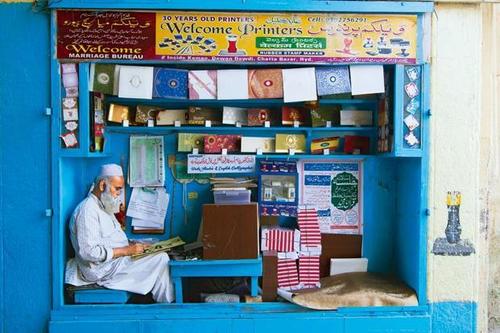 Opening his bottle of Camlin Waterproof black ink, Mohammed Abid Khaleel dips the nib of a pen and writes “Allah” in Arabic on a white sheet of paper. He tilts the pen at an angle and writes every letter in one flourish, alternating between thick and thin strokes. “Always write the name of God before starting to write (anything else),” says Khaleel, an Urdu and Arabic calligrapher in Hyderabad.

It’s a weekday morning, and I am visiting Chatta Bazar in Hyderabad, the city’s printing district. The street’s colourful, neatly organized shop windows are filled with invitation cards to weddings, naming ceremonies and birthdays, and visiting cards—all of them with Urdu decorative writing and motifs.

Calligraphy has been a part of Hyderabad’s heritage for at least five centuries. Mosques and tombs built in the 16th and 17th centuries by the Qutb Shahi rulers feature exquisite Islamic inscriptions. Handwritten copies of the Quran gifted to the last nizam are still on display at the His Exalted Highness The Nizam’s Museum in Purani Haveli. At first sight, the calligraphers I’d heard about are nowhere to be seen. Some shopkeepers tell me there aren’t any. Finally, someone directs me to a board that says “Welcome Printers”. This is a small, blue kiosk tucked inside a kaman (a large, concrete gateway). In the midst of cards arranged on shelves, a sign says “Urdu, Arabic and English calligrapher”. Khaleel is seated on a chair in a corner. A row of pens with broad-tipped nibs lie on his desk.

“What’s your name?” he asks, pulling out a long sheet of paper. He draws light, horizontal pencil lines on it using a ruler. He then picks up a pen, dips it in an inkwell and writes my name in Arabic and Urdu with an unwavering hand. “It takes 10 years to perfect an art like this,” he says.

Calligraphy was typically handed down from generation to generation within a family. Khaleel himself has been a professional calligrapher for about 40 years. He used to write for The Siasat Daily, a Hyderabad-based Urdu newspaper, from 1980-92. “They made blocks out of the writing and printed it in bulk. Since Urdu and Arabic was only handwritten back then, printers had to work closely with calligraphers,” he says. So even though calligraphers had lived in Hyderabad since the 16th century, Chatta Bazar only became a centre of calligraphy after printing became widespread.

What about material? “Inks are easily available in stationery stores, but I don’t find these high-quality wooden pens any more in the market. I’ve been using the same pens for 30 years. There are still people who want wedding cards to be done in traditional calligraphic handwriting. They believe it adds that personal touch. The writing is then scanned and printed in bulk. The appreciation of this art is growing as use of computer fonts is increasing,” says Khaleel. I stop next at the highly recommended Nayeem Commercial Artist and Qattath (calligrapher). I walk up a staircase without railings to two shops belonging to Mohammed Nayeem Saberi.

The walls are covered with ornate frames of Saberi’s work. Unlike conventional single-ink calligraphy, the writing is coloured. Each letter has shades that blend into one another. “I call it multicolour calligraphy,” Saberi says. He brings out a flat piece of wood and asks me to examine it. “Bamboo,” he says.

Saberi has invented a unique style of calligraphy. He sharpens the edges of chunks of bamboo to serve as calligraphy nibs. Different colours are then added to the edge—one end of the edge is dipped in, say, blue, the other end in red, and the in-betweens are filled with dabs of yellow and green. This chunk of wood is then held carefully over the surface, taking on the role of the kalam (pen). As it moves over the paper, it leaves different shades of colour that blend into one another. Unlike other artists who use ink, Saberi uses acrylic, and sometimes oil paints, on art paper.

Saberi learnt the art when he was 10 from a calligrapher at Osmania University (Hyderabad), and has practised it since. He became an architect and worked with the Central Public Works Department for 40 years, but he continued to write and paint, attracting students who wanted to learn his style. Once he retired, he set up shop; it was almost instantly a success. “My pension is inadequate, so this is a good additional source of income,” he says.

He gets work from all over the world. He holds calligraphy workshops for all ages at the Siasat office during their 30-day annual summer camp, and has held exhibitions of his work across India and West Asia.

I drop in next at the Hyderabad Cards Centre. “Most of the cards are printed nowadays,” says Saifuddin (who uses only his first name), one of the store’s partners. “Calligraphy is an art that’s fading away. Even though there may be more than a hundred people who can write in calligraphy, most of them practise it as a hobby. Since the artists are underpaid, especially with computers taking over the market, parents discourage their children from taking it up as a full-time profession. To master the art, one has to put in many years of practice. The art is also dependent of factors such as age, because one cannot write with a shaky hand.”

Yet the art, its graceful curves and lettering dotted with diamonds, lives on in the city’s by-lanes. The word for calligraphy in Urdu is khushkhati, literally meaning “happy writing”. It is this enduring joy that had shone through earlier in the day when Saberi told me, “Guess my age! I’m 84! Such an old man. Par mera haath bilkul jawan hai (But my hands are young)!”