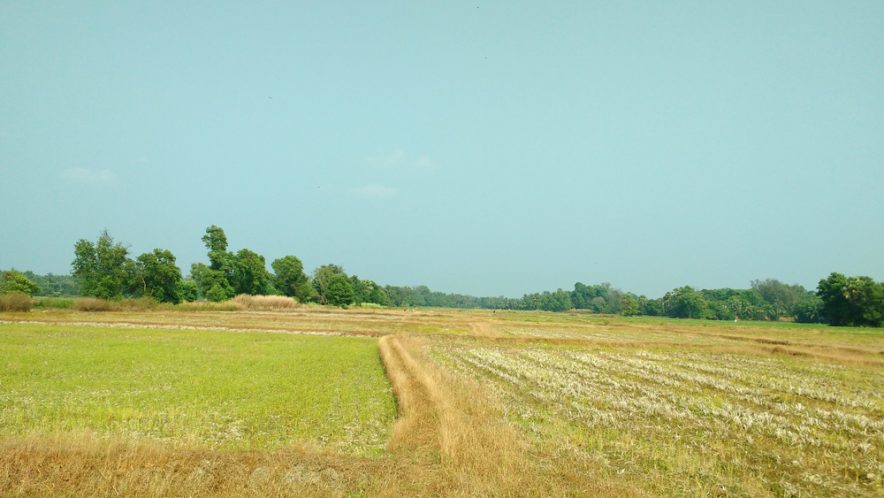 My right leg was starting to hurt as I balanced all my weight on it mid-step, trying to not make a sound. We were standing on the bund of a paddy field, and had just spotted a kingfisher enjoy the afternoon sun. It bobbed up and down, as the branch it sat on swayed gently in the breeze. Below it, an emerald pool glistened, holding the promise of three square meals a day. To my right, corn-yellow fields stretched up to the horizon, where a row of coconut trees touched the sky.

With an eye out for snakes in the grass, I followed Harsha, who was leading the way, barefoot. He had grown up in this village, with its red-wattled lapwings, ubiquitous crickets and rich, fertile soil. Groundnut plantations flourished in between just-harvested paddy fields. H pulled out a leafy legume, with a bunch of about 20 groundnuts attached to its roots. Beaming, I munched on the freshly picked nuts as we walked on.

“Back then,” Harsha told me, as he pointed to a gigantic banyan tree ahead of us, “All the village kids used to pick a favourite spot and study on this tree. This tree is old and wise. It had read chemistry, math, English, Kannada…it knows everything from kindergarten to BCom!” At the foot of the tree was a small concrete structure, with a flat rock inside — a temple of the local god Bobbarya. A deposit of a lone one-rupee coin lay in front of a flat rock that symbolized the god. Harsha heaved himself easily up the tree, using its thick, knotted vines. He settled into an old favourite spot for a few minutes, contemplating the ways of the world — or so I assumed. He looked upset as he descended: “I’ve disturbed many spiders’ homes.” 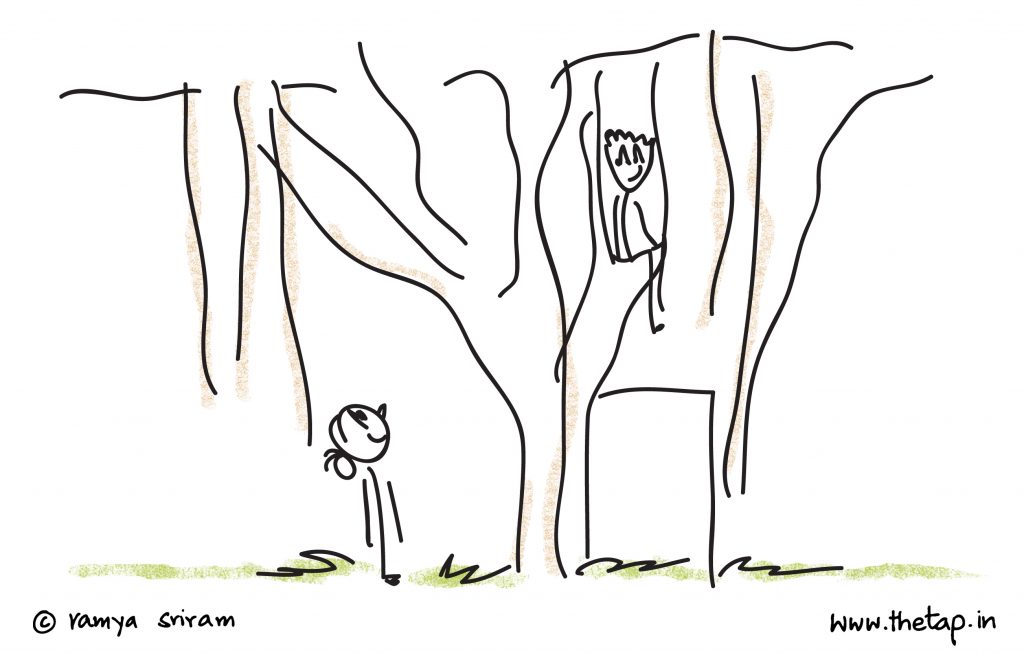 Further down in the fields, we picked some bean pods and split them open. “Oh! Moong daal,” I announced happily, as I popped some in my mouth. We watched a black drongo perform its mid-air acrobatics and secure a satisfactory lunch. The path led to the village pond (where prawns were harvested), and the village ‘river’ — formed by the backwaters of the Arabian sea. The waves put up a display of dancing diamonds as they reflected the sun. Brahminy kites soared above the waters, and a green bee-eater rested on a wire. We settled down on the mud by the banks, waiting for a sighting of one of two things that Harsha anticipated: an otter, or a pied kingfisher. Minutes went by and sure enough, a pied kingfisher magically appeared, settling on a pole in the pond. Before I could contemplate on its unusual colours, a Brahminy kite swooped down low overhead, right above me. I was thrilled! It flapped its great big rust-coloured wings, rising up into the sky till it became a tiny silhouette.

I mentally zoomed out of the picture I was in, until Gundmi became a small speck in this gigantic world. I suddenly felt immensely grateful to be a part of such a pretty speck. 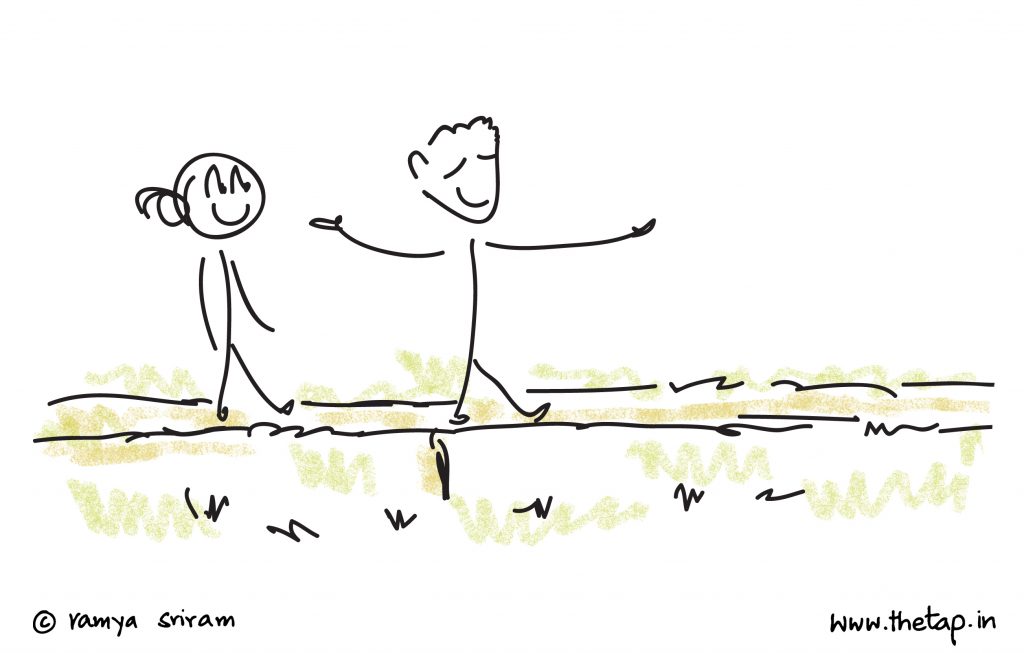 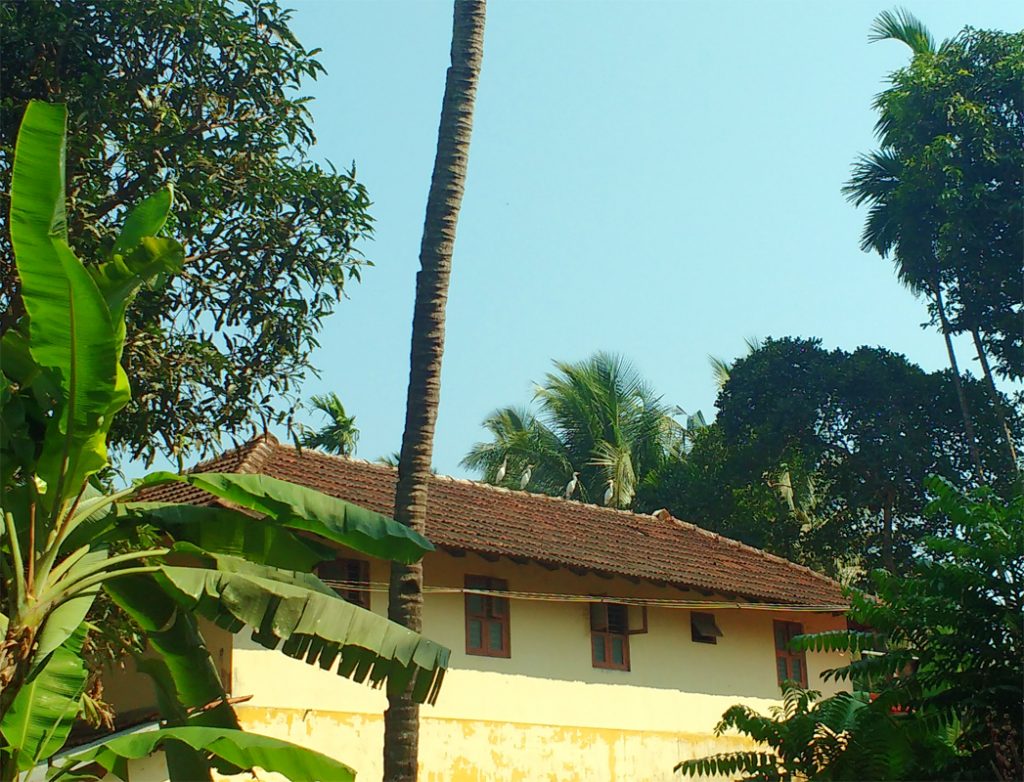 Four egrets have a meeting

Back in Harsha’s 70-year old house, small things fascinated me. Kittens pawed at a snake-gourd, perplexed about why it just wouldn’t play with them. I sat on the cool red oxide floor, leaning against a wooden pillar. From there, I could see an orange-and-grey Rufus treepie drink water out of the bird bath, cackling away loudly. A group of babblers hung around, waiting for their turn. The house itself, with its platformed structure, held a considerable amount of its original construction. The doors were carved in wood, with low roofs — “Watch your head,” Harsha supplied helpfully, every time.

While Harsha and his mom went outside for a bit, I gathered the courage to go explore the floor upstairs. I’d been told that nobody went there anymore, and that mysterious noises came from the roof (a group of civets visited on some nights). I climbed up the dusty steps, hoping I’d find a civet waiting for me once I got up there. But what I saw was a large room, with big windows, and a roof that might have been home to plenty of creatures big and small — I wasn’t brave enough to find out. As I turned and walked down the stairs, I heard an enormous crash, and suddenly I was convinced that Manjulika (Chandramukhi) was going to come and get me. I hurriedly stumbled down the stairs and locked the door behind me. I turned around to find that the kittens had bumped into a chair and had knocked it over. We were all equally startled.

Outside the house, a deep well supplied water for irrigation, and another provided drinking water. A gobar gas plant bubbled away (it made me want to giggle, looking at bubbling cowdung). A pile of grass and other organic waste sat next to it (“a perfect spot for snakes,” Harsha declared. I backed away immediately.). I could see shapes of frogs in the well. All around the house grew coconut trees, pineapples, jackfruit, snake gourd, and palm trees. You could look anywhere and find a vegetable in the making, or an six-legged creature inspecting you. It was impossible to think of the house as just a house. It was part of a larger living, breathing entity. 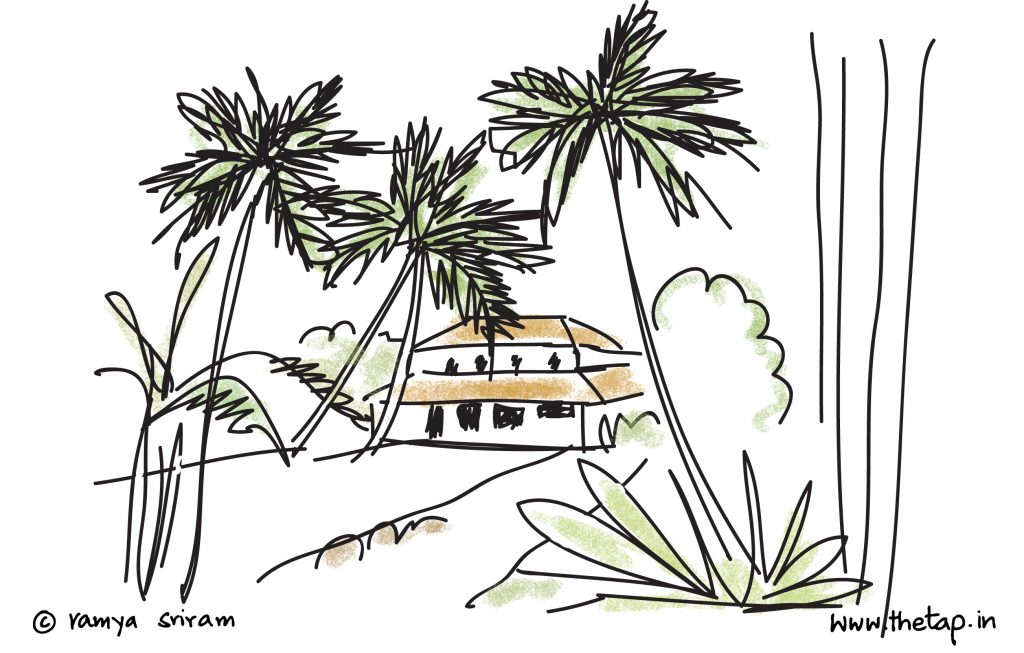 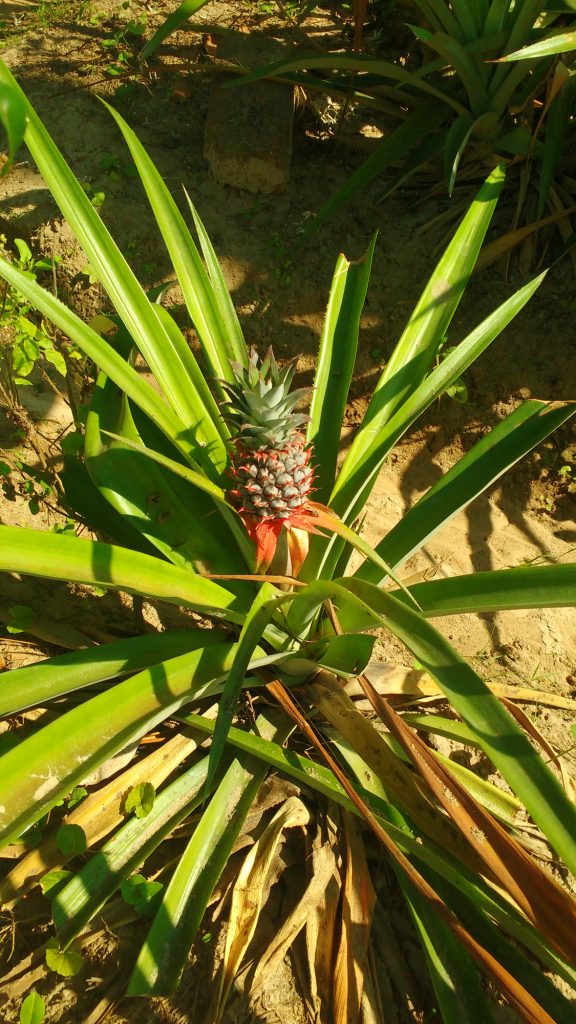 A ripe pineapple, one of the many unexpected surprises

I digested all of these sights with some frothy filter coffee served in a steel tumbler. Harsha’s mom makes possibly the best coffee in the world. She spoke animatedly about her groundnut plantations, which she’d been tending to for years. She had recently been to Dubai — her first trip abroad and her first time on a plane. I asked her if she would like to live there. She looked puzzled and stated what was to her the most obvious reason not to live in Dubai: “But you can’t grow anything there.”

As flocks of birds started to fly homewards, Harsha and I went outside to watch the sunset. Over the years I’ve seen many sunrises and sunsets — over mountains, seas, rivers and cities. A Gundmi sunset, however, is unlike any other, and has to be witnessed from the vantage point of the fields outside Harsha’s house. The setting was this: behind us was patches of newly sprouted plants — brinjal, spinach, ridge gourd, amaranthus. In front of us, rows of fields led to a bunch of coconut and palm trees that formed a sort of fence around the village, their leaves forming a dark contrast to a reddening sky. As the sky’s colours deepened, the sun, a fiery golden ball, started to lower itself among the trees. It lost some of its fierceness as its light faded into a soft glow. I told Harsha that the whole process reminded me of babies trying to go to sleep… they keep trying to stay awake but then there’s this moment of surrender. The moment when the baby accepts that the day is over and it’s goodbye to the world for some time. I enthusiastically launched myself into this analogy. Harsha stared and me and said he had no clue what I was talking about. 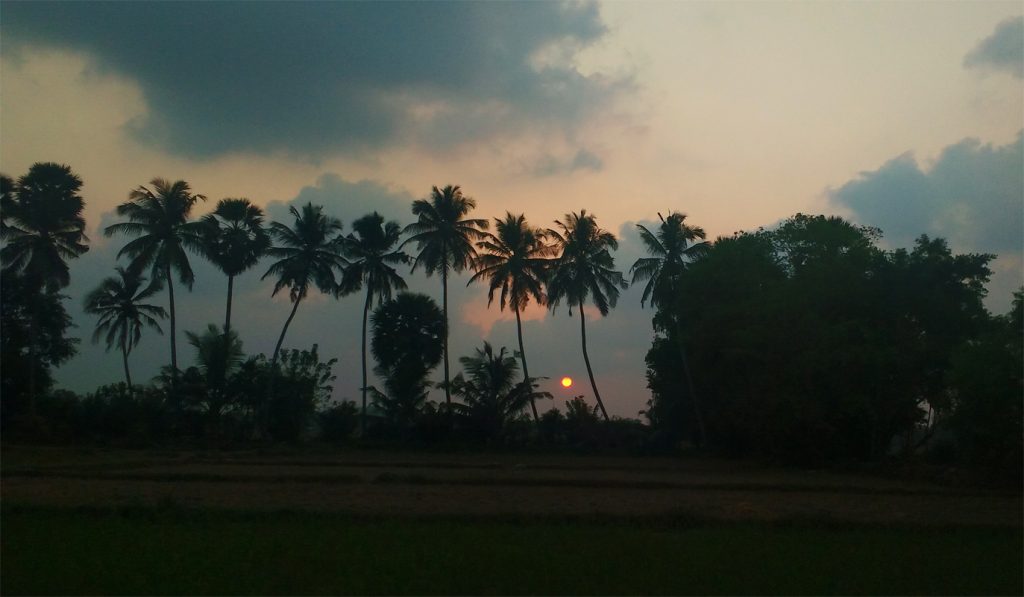 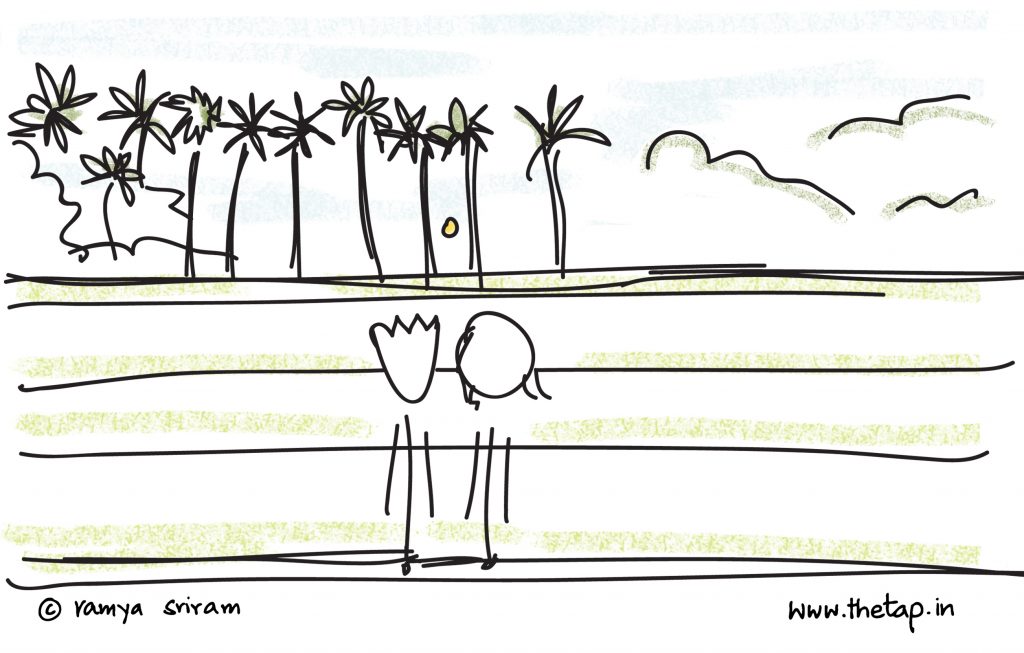 If you asked anybody living in the village, they’d tell you that life in Gundmi was slow, predictable. But maybe, for the village’s non-human inhabitants, this was a fast-paced life, as they went about fighting competitors and pursued for themselves and their families a modest meal. To me, the village was full of surprises. I’d seen my first mongoose that morning, I had watched crows chase a kite that was carrying a mouse. I had seen stars in the night sky that I didn’t know existed.

Though largely, life remained the same, sweet, sharp thrills lay in finding a leaf that had grown overnight, or in finding a grasshopper caught in a spider’s web. This village had almost everything you might expect to see in a nature documentary — cobras eating frogs, birds performing clownish antics to attract females, predatory birds sneaking up on unsuspecting prey. I could not tire of watching majestic open-billed storks fly from one coconut tree to another. Nor could I get tired of hearing different bird, animal and insect calls, interspersed with the sound of someone’s motorbike or the local temple’s percussion. Even different trees made characteristic noises, making sure their voices were heard. I could never tire of the feeling of mud beneath my feet, or the smell of fresh, wet earth. But perhaps the reason I fell in love with Gundmi so much was because it gave me the freedom to do what I liked best: walk endlessly and thoughtlessly on an unfamiliar path. 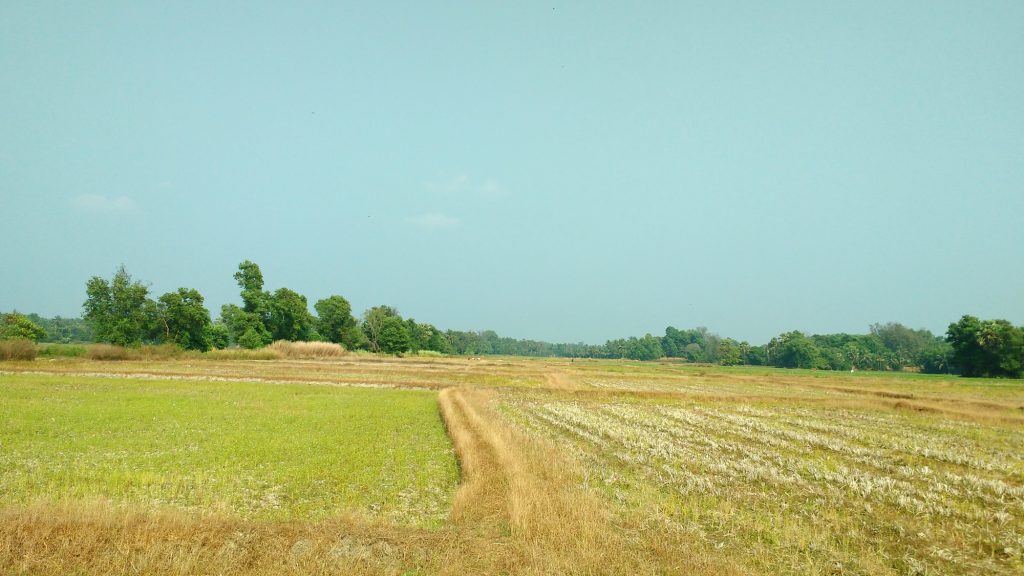 Check out Harsha’s project, “Wild Gundmi“, that documents the wildlife in the area: birds, otters, mongooses and more.

4 Comments on “Gundmi: Of paddy fields and barefoot simplicity”