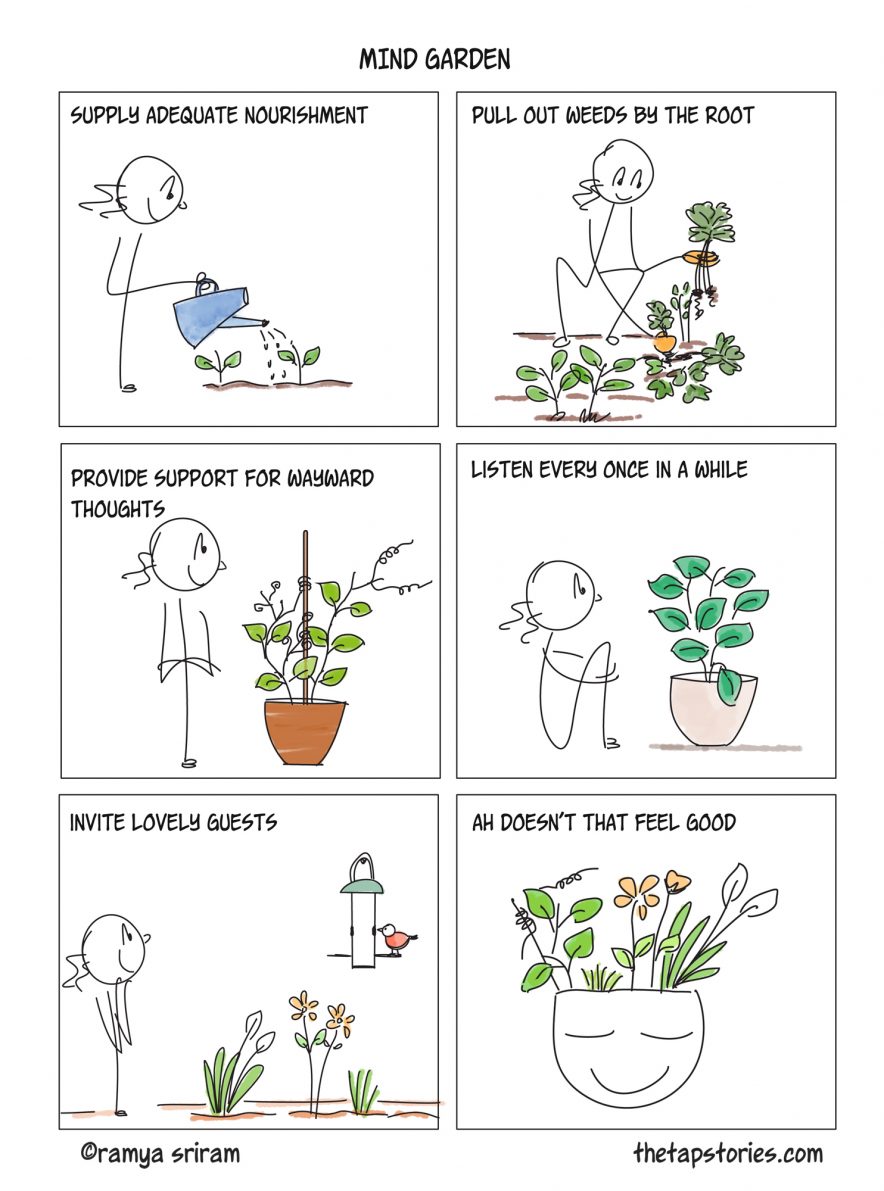 I’ve been drawing comics about mental health for over a decade now. Here, I talk about why I draw comics and how they’ve helped me battle mental demons.

When I was about twenty, I started making stick-figure comic strips as a bit of a joke. They worked as great gifts for friends’ birthdays: I’d make caricatures and draw stories of funny incidents. I didn’t know then that making comics would become an emotional crutch for many years to come.

Throughout my twenties, I searched for purpose and meaning with the conviction that I would someday hit upon life’s secret. I drew comic after comic: initially as a means of escape and later as a means of self-discovery and self-acceptance. It was a way to cope with burnout and anxiety, loneliness and helplessness, the exhilarating highs and the abysmal lows. In my late twenties, when I moved overseas, I was overcome by the change and the newness. Comics made me feel at home: it was something that had stayed with me, something constant, something that refused to part with me even though I had moved.

As someone who’s always in “too much” mode, I find relief in closed panels. In some way they are significant of boundaries, of the illusion that some part of me can be contained, some part of me is finite.  If I can structure and fit all of what I want to say about a topic into neat sequential boxes, it feels like I’m drawing lines around me, around each cluster of thoughts in my head. Those lines help me stay sane.

Drawing comics has made me feel both vulnerable and fearless. After so many years, I’m finally able to put down my raw and untidy thoughts and separate myself from the panic of being thought of as raw and untidy. Through baring my soul to strangers, I let go of my obsession with perfection. Through drawing comics about mental health awareness, I’m also able to connect with people, especially those who cannot or don’t want to ask for help or support. It’s amazing how strangers can connect and have access to parts of you that your closest friends might not.

Making these visual stories ultimately helps me feel like I’m in control. It’s immensely satisfying to dumb down the monsters in my brain into clean (sometimes not so clean) lines and shapes: ha, they can only harm you when they’re inside you. It makes me feel empowered, the ability to take all of the tangled up thread inside me and pull out one continuous string to help the kite fly higher. And that maddening creative process is what offers strength: the lack of answers being a good excuse to throw yourself into something you want to get better at. 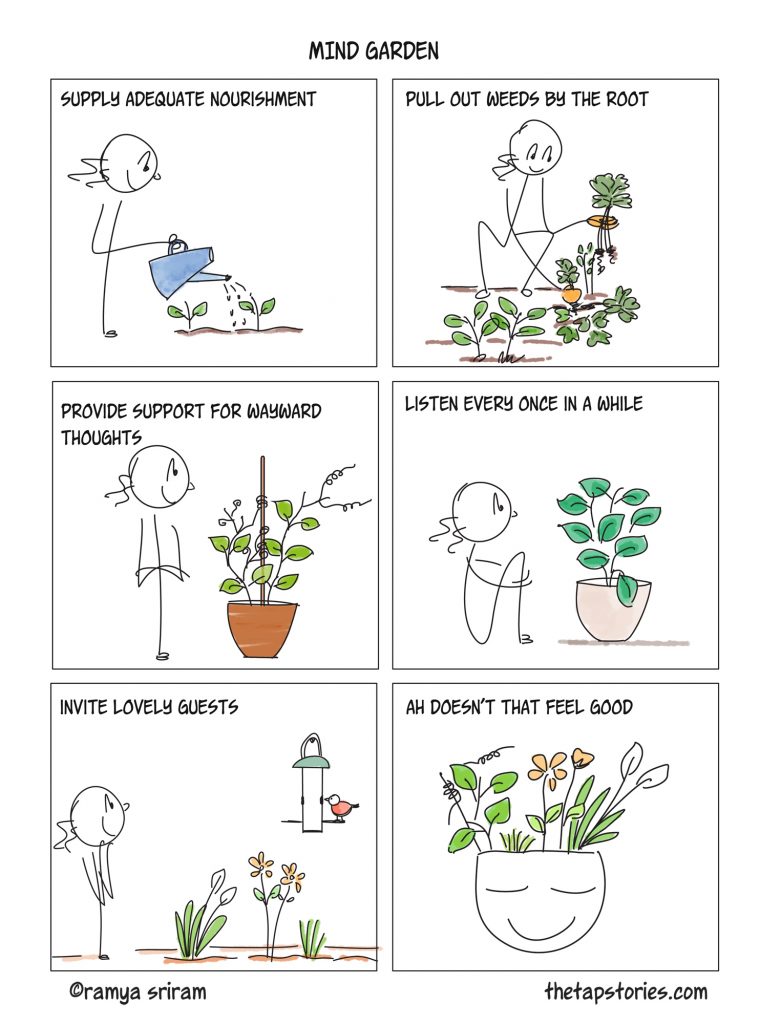 Comics about positivity, happy-happy: Not always

I’m always surprised when people call my work positive and full of hope, because my work is often prompted by existential crises and an anxiousness to do it all. I overthink, overanalyze, overcommit, overdeliver and overdo pretty much everything.

Last year, I started a project called “The Sink”: an antagonist to “The Tap”. I told a friend I was depressed and he said: You’ve got The Tap for the happy stuff, how about The Sink for the sad stuff? It was perfect. I started drawing about my constant battle with feeling inadequate and a newfound conviction that life is ultimately meaningless. The Tap and The Sink have allowed me to explore two completely different sides of my personality, sometimes in two different sides of the same comic, as you can see in the examples below. It’s been a liberating experience.

The Tap – I have so much give 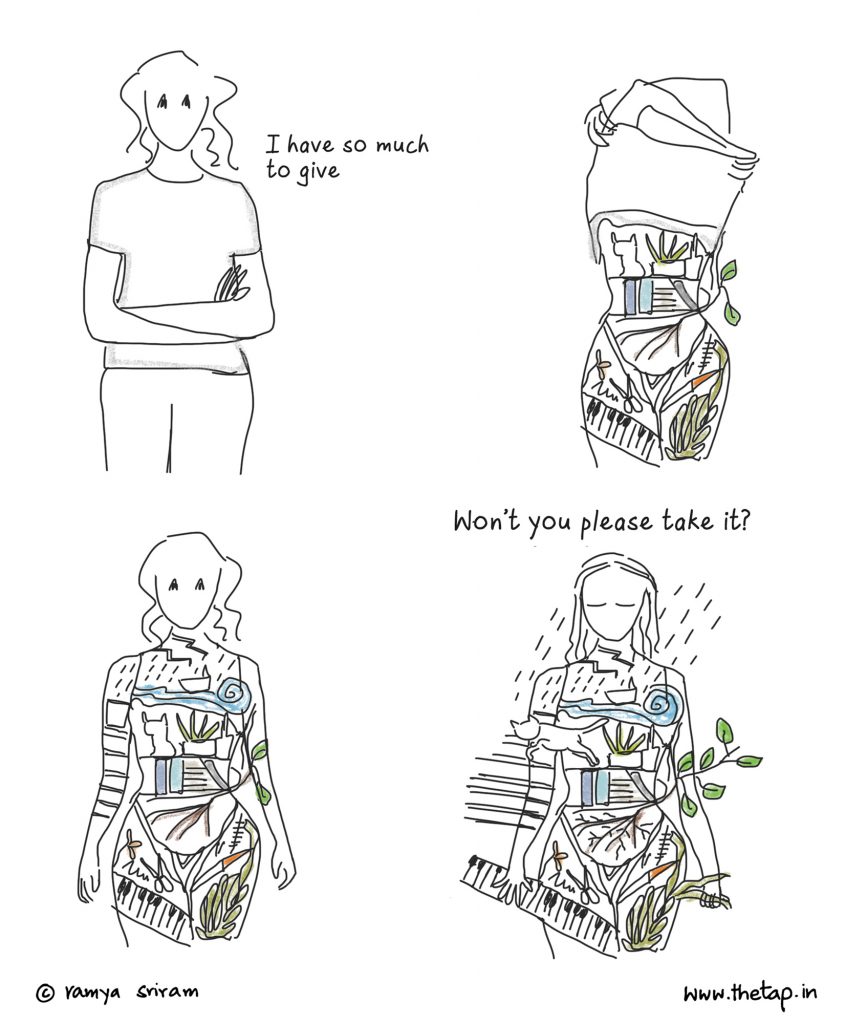 The Sink – I had so much to give 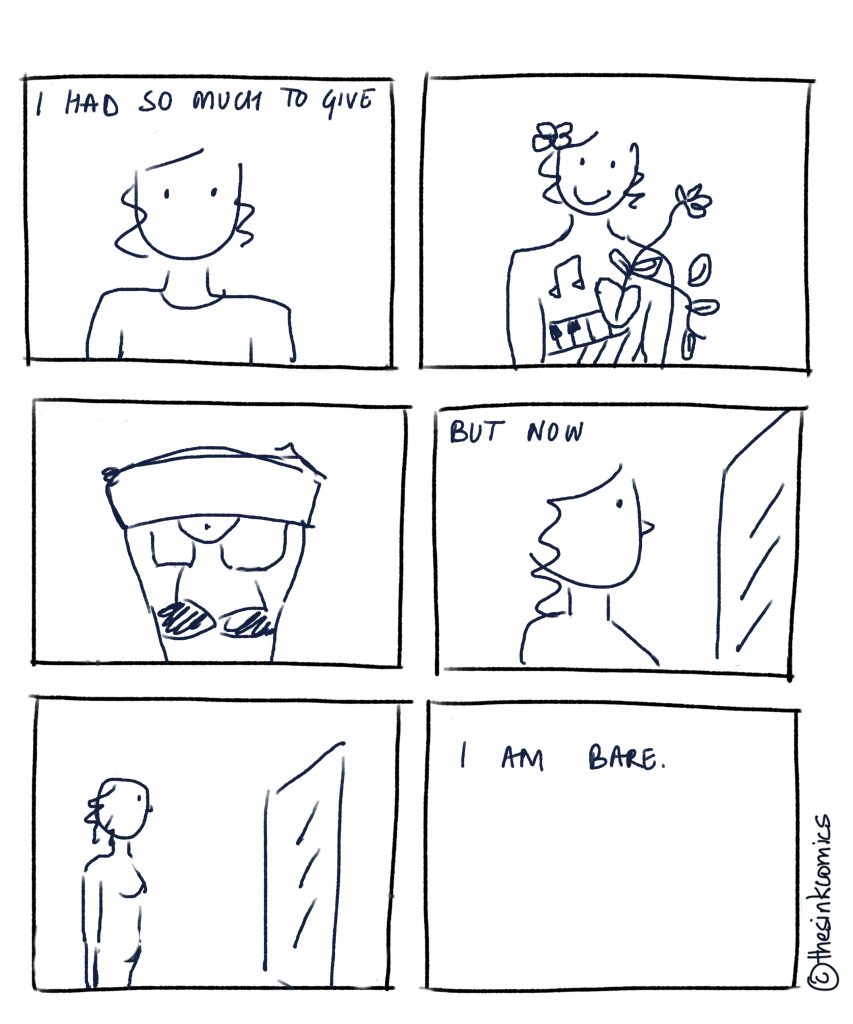 Why I draw comics

I truly believe that self-expression is a great way to heal, stay afloat, and keep carrying on in a world which seems startlingly beautiful and astonishingly stupid all at once. Whether it’s drawing mental health comics or playing the piano, even if you’re doing it both extremely badly, I think it helps to have a creative outlet. For me, drawing comics–especially about mental struggles–helps me explore my own mind in a way I cannot do through conversation. It works as a safe space for me: a reservoir that can hold all of the extreme emotions I feel on a daily basis. It makes me feel like I can get close to liking myself.

I was once in a phase where my mental health severely affected my physical health. I resolved to never be in that space again and to not let go of the things that make me feel In Charge. We all find our ways (healthy or unhealthy) to cope with/ignore/accept  life’s random cruelty. Making comics helps me capture and frame the turmoil, the beauty, the emptiness and the overwhelming fullness of our everyday struggles.