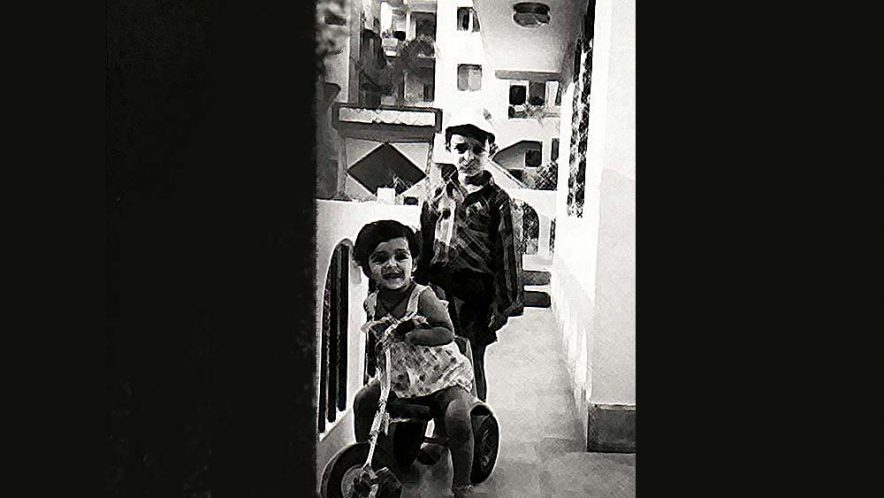 I don’t know where my parents procured the Magic Toothbrush from, but it remains, to this day, the single most fascinating thing I have ever seen in my life. My brother and I woke up one day to find that we had just willed the ‘changing colour’ toothbrush to jump straight out of the TV ad into our hands. We carefully filled a mug full of hot water and dipped the brushes in it, waiting in anticipation. And sure enough, the purple toothbrush turned into a blush of pink and my brother’s red into a happy yellow. (Ei my colour is better!, I told him triumphantly.)

And so every morning we spent a considerable amount of time dipping the toothbrushes in hot water, waiting for them to change colour, and watching them gradually fade back to their original colours while we brushed. In the household’s morning madness of only-one-hour-running-water, dubbas to be packed and tiffins to be carried, the event of brushing our teeth suddenly assumed prime importance.

We were fortunate enough to live just across the street from Walden, one of Hyderabad’s best-loved bookstores, and next to Prime Time,’ the dashing-car place’. And of course, we were fortunate enough to have parents who walked us across that street. Baker’s Inn was a stone’s throw away, and soon, Pizza Inn, one of Hyderabad’s first pizza outlets came up behind it. There’s a secret underground passage between the two, my brother told me, in hushed tones. Only I know about it. I’ll take you some day. He never did.

I worshipped my brother for many years of my childhood. He was So Cool. He taught me to blow Big Babol bubblinggum bubbles. He read to me every night the abridged version of Count of Monte Cristo (which, for the longest time, I called CountayMontay Cristo). He took me on bike rides. He was Star Swimmer in Secunderabad Club, another place which adopted us when we were kids. He could do Scary Folded Eyelids. He taught me to play book cricket and ‘house, hut, palace’. He got home tamarind seeds from his school, and I rubbed them against each other all day, trying to make a fire. He taught me swear words (unintentionally). But his Hero status ended abruptly, when, one night, I was woken up by a ghostly, ghastly apparition hovering over me, moving its pseudopodia-like arms about furiously. BOOOOOO, it rumbled at me menacingly. AAAAAAHHH!!, I screamed. When my parents pulled the bedsheet off his face, I went to bed furious, resolving to be a better judge of character in future.

And then there was the Curious Case of the Cupboard Cricket.  A Godrej almirah stood like a morose sentinel in the room that my brother and I shared. Every night it would emit a series of shrill chirps, following which Anna would give it a bang, and the noise would stop. After five minutes, it would start again. What is this cricket? I asked my mom. She said it was a harmless insect. I rummaged about at the back of the cupboard one day trying to find it. I had (thankfully) never seen a cricket before. (The sight of crickets today makes me jump like I’m one of their own.) I didn’t find the insect, but I found an old giant pop-up birthday card instead.

Pop-up cards were something. So were yo-yos. So were my dad’s beautiful letterhead papers that he carefully brought for me from various hotels that he stayed in. And then there were my mom’s cakes. And Diwali sweets. And Holi pitchkaris. And notebook labels with cartoons on them. Balloons from Tank Bund were a special treat. And Lucky Dips.  And cups I would fill with soap water and blow bubbles out of with a straw (I later graduated, with the help of the maid, to blowing rin soap bubbles right off my hand). Santa came to Walden every Christmas. The annual house-washing event was also looked forward to with enthusiasm because the soapy floor favoured skating adventures.

Summers were spent in my grandparents’ place in Gujarat, where my cousins and I grew up eating mangoes, getting into neighbourhood fights, adopting street cows and generally having a notoriously gala time. We slept on the terrace on rajais, after having had puri-Shrikhand and having listened to my uncle’s bedtime stories under the night sky. My grandfather was a great storyteller too – tales of the Trojan horse, anecdotes from the Mahabharat, quotes from Wodehouse, his own experiences as a teacher. In Chennai, another uncle, a sailor, told me stories of his travels, of ships and whales and tornados, and I waited patiently for an octopus to show up in them. A older cousin once came home and taught us to make boats of paper and camphor and float them in our bath buckets.

School was an altogether strange and surreal world. Maria placed cracker (balsam) seeds on her tongue, upon which they exploded. She could also walk on her hands. It was my dream to excel in similar feats. There were skeletons in the lab (that came alive at night with glowing red eyes) and crocodiles in the drain. There was piano class, where you could open up a piano to see the hammers hitting the strings. SUPW taught us to make jumping frogs out of paper. There was groupism and tree-climbing and ice-cream uncle and there were fights and tears and iodine knees. There were competitions and choir practice and dramatics (where I appointed myself as pianist for fear of being made an inanimate object).

Out of school hours, I was made, like many other kids, to learn Bharatnatyam and Carnatic music. When I hit a couple of notes on the Casio, my parents enrolled me for piano lessons. I made a get-well-soon card for my brother with a pig’s face on it – and this, taken to be the sign of a budding artist – prompted my parents to send me to a variety of art and craft classes. And so I learnt to stitch odd-looking soft toys, paint on glass, mould pots and flowers from POP, pencil-sketch, carve sola wood, make gift boxes, write calligraphy, and what not. Happy with the fruits of their encouragement, my parents tried badminton and tennis on me but soon discovered that I was a lazy lump of lard. I did enjoy periodically poking the touch-me-nots growing by the court, though.

We also travelled quite a bit, during which the family transformed into a bunch of jokers. My dad worried about shower pressure in hotels. My mother worried about wild animals and about my brother, who went Too Close to Edges. I gambolled along gaily. In Hyderabad, we went annually to the P C Sorcar magic show and to my favourite childhood haunt, the Birla Science Museum and Planetarium. Trips to Softy Den and Pick N Move spelt Heaven.

Looking back, I feel that in more ways than many, exposure just landed on my plate. The simplest of simple things made a difference. Sometimes, my mother would deliver the love in the form of two dots and a smile of ketchup on a round uttappam. My parents, brother, grandparents, aunts, uncles, cousins, neighbours, teachers at school, teachers at various hobby classes, school friends, hobby-class friends, parents of friends, maids, drivers, watchmen, other apartment inhabitants, grocery shop uncles – everyone played an exclusive role in gifting me a glorious, magical, happy childhood. A childhood that is tangible when I rub two tamarind seeds against each other and press them on my palm, feeling the sweet, familiar thrill of their warmth. 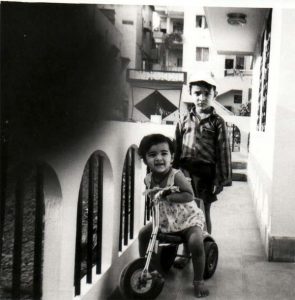