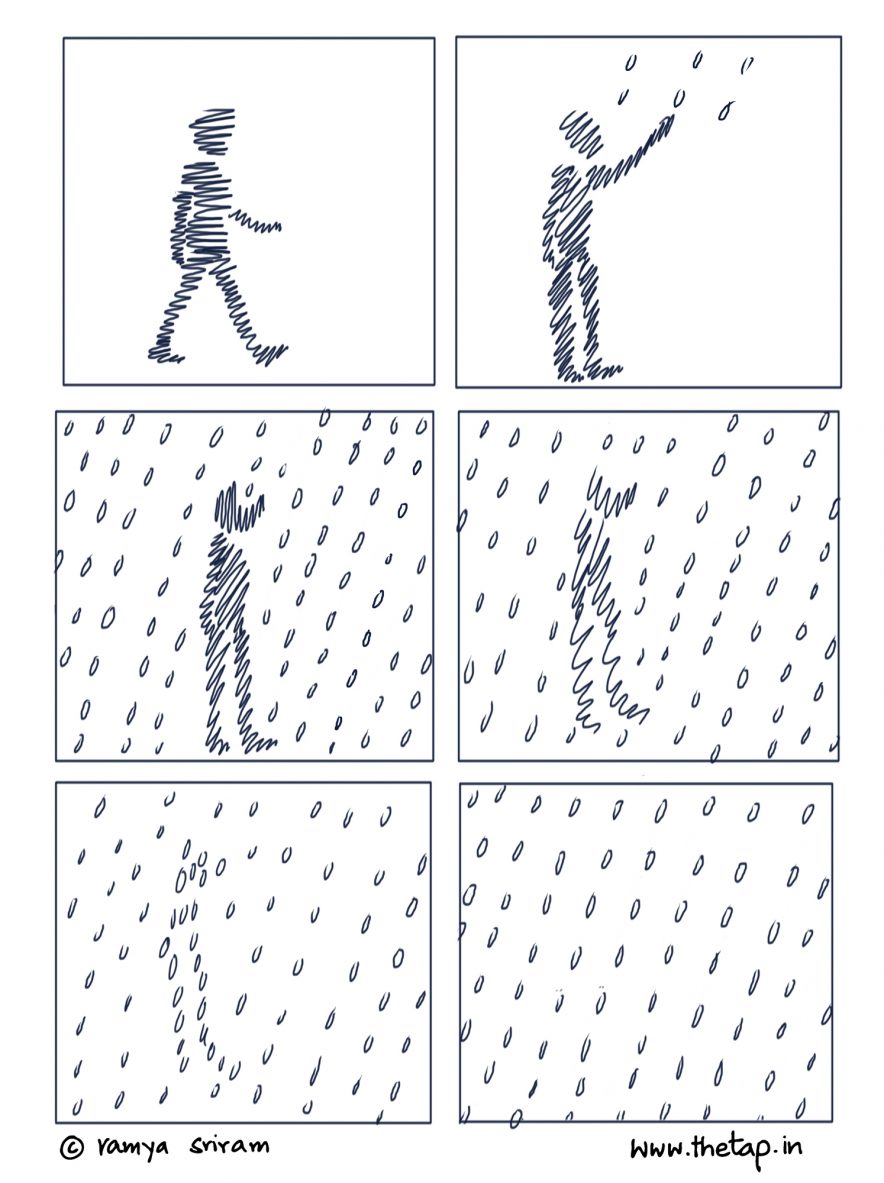 People often say that to create a comic strip you need to have amazing, out-of-the-box ideas. While that’s certainly a plus, it also means that aspiring cartoonists are so worried that they can’t think of ideas, that they don’t end up creating anything at all. I hope some of the suggestions in this article will help overcome that block!

I believe that the first step to creating a comic strip is to think about what matters to you.

Ideas are not something outside of you: they’re in the way you react to the world and process it.

How you respond to your environment is unique. You are different from every other individual on this planet. Your story is like nobody else’s. What is the story you want to tell? Why are you in the best place to tell that story?

A lot of stories, especially in comics, come from observation. Roam around with a notepad for a few days and jot down things that you observe: the silly, the amusing, the bizarre, the wonderful. That will help you understand your own world-view and plant the seeds of the stories you can tell in your unique voice.

The story can be real, imaginary or a mix of both. You could take a character you know in real life and bring it to life in your comics (I found my inspiration right at home and started a comic strip about my mom!). You could think of fantastical characters: superheroes, villains, cute animals, snarling monsters, the lot: as long as it’s something that you find fun and interesting.

You could draw from what you know best: your life, your experiences, your perspective. Many of the world’s best graphic novels are memoirs: such as Craig Thompson’s Blankets, which is one of my favourite books.

You could create whacky storylines and plots, with multiple characters and layers. Take Krazy Kat, which to me is one of the saddest, loveliest comic strip ever made. It’s about a cat that’s wildly in love with a mouse. The mouse frequently throws bricks at the cat, but Kat interprets it as a sign of her love for him. All too real, isn’t it?

And then take Grant Snider’s popular Incidental Comics. They’re reflective, bits of life lessons in panels: universally relatable. I love how one can draw from personal experience and make that experience belong to someone else.

A style that I find very intriguing is the one that “Chats with the Void” uses: a philosophical take on existentialism through conversations between bizarre (but very cool) animals and demons.

What’s the theme? You could draw comics about mental health and anxiety, if it’s a topic you’re passionate about. Or you could find that you only like drawing elephants and you spend the next ten years creating stories featuring elephants. It could be anything.

The world’s your oyster: it is YOUR WORLD.

So, now that you have a lot of different examples to explore and mull over, think about what the story is. Give it some kind of structure or a sequence – a sense of a beginning, a sense of continuity. Think of it like a slow moving train, taking you through different frames, stopping at different stations. What will those frames be? Which are the stations you want to stop at and which are the ones you want to drive past?

I think strong writing is absolutely fundamental for a comic strip. The writing needn’t necessarily manifest in the form of words and dialogue, it could form the skeleton on which you want to build your visual sequences, especially if it’s a silent comic. I think the script is super important. I’ve sat with half-written stories for weeks, months, even years. I like refining the process to get the story absolutely spot-on before I put it into panels.

The comic below is an example of one that I spent a lot of time on, getting the text and sequence right.

Do you need spectacular drawing skills to create a comic strip? Well, it depends. I’m not a huge fan of detailed artwork: I like the idea of saying a lot in a few lines. I get both praise and criticism for using stick figures. But I love using them because they are such a broken-down form of art and so easily digestible, almost like a universal visual vocabulary. I also find it super-challenging to say what I want to using a minimalistic format, without diluting the meaning of what I want to say. I could think of many different styles I want to create my comic strip in (watercolours, collages, retro) but I only have one lifetime.

So, depending on your story you can think about whether you need a very stylized art form, a simple, line drawing style, a hyper-real format, and more.

Find a style that’s unique to you. Even within simple styles, it’s easy to make your work distinctive and memorable: take XKCD for example, or ohboyiam.

I also find it interesting how different people draw specific features, like eyes. Look at the little circles in Lunar Baboon, the almond shaped beady eyes in Aya of Yop City and how rubyetc has one eye popping out in the side profiles.

A cat can look like a cartoony cat (as in Simon’s Cat), a cat-head with a human body (as in I want to draw a cat for you), a rotund but strangely cute blob like in The Oatmeal, with whiskers only on one side like what Liz Climo does or a angry sheep-cat like in Exocomics.

Of course, it can be very useful to work with illustrators if you can write, and vice-versa. It’s always great to see how a collaborator can bring your idea to life in a new way or provide a fresh perspective.

If you don’t have access to drawing software, Canva has a comic strip maker which might be useful as a starting point.

Do you need words to go along with your pictures?

If yes, what do you want the text to look like?

I’m a huge fan of silent comics. Shaun Tan’s book The Arrival is an incredible example of how you can tell a poignant, profound story without using any dialogue or text at all, the pictures speak for themselves.

But in a comic strip, it’s possible to find more creative freedom using both text and illustration. You can tell different stories verbally and visually. You could use the text to support the artwork, or vice versa. It might take some experimenting to see what works best for you.

Some comics are best left without any text: here’s an example of one of my comics that I think works best with only the drawings. 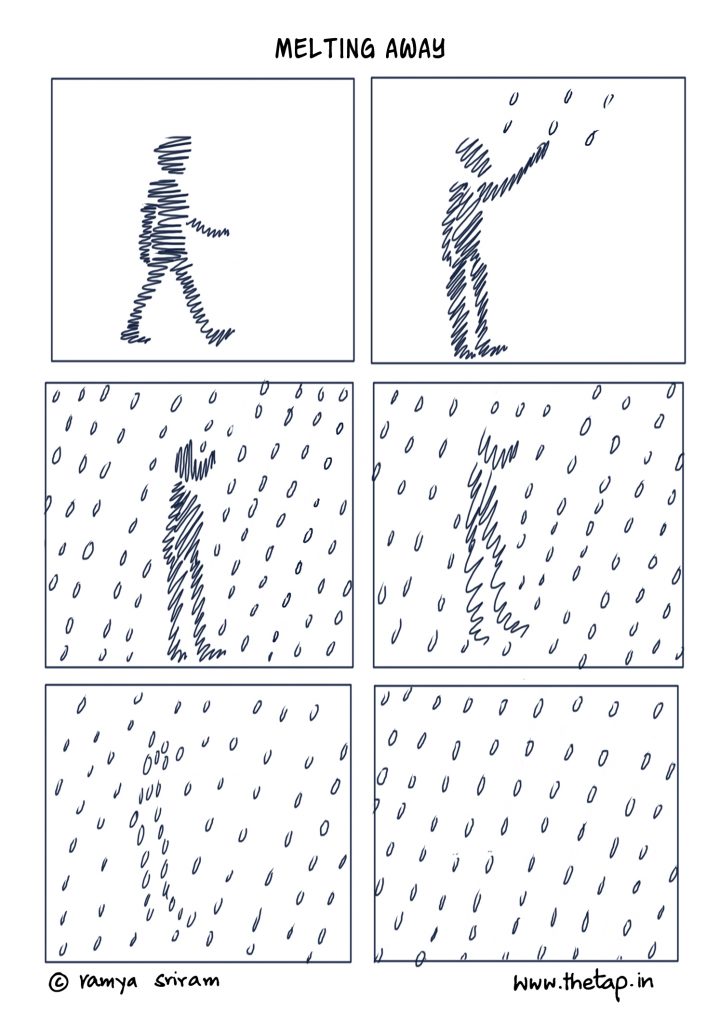 Also, fonts. Find a font that works well for your story and artwork. I like consistency in fonts (something I’ve been really bad at, as I kept changing them over the years). It’s also easy to turn your own handwriting into a font.

One, two, four, or six panels. Or you can choose to be inconsistent like me 😛 I have comics that are single-panel as well as 24 panels long.

I draw the boxes using a preset square. Apparently this is a big no-no and the “real” artists hand-draw the boxes in comics. Well. I’d say go with whatever you like best. Or you could hand-draw one template and re-use it.

I don’t play around much with frame sizes and shapes  (I’d like to), but I think it can add a lot of depth and character. Look at the sizes of the frames in the artwork here.

With all of the social media formats nowadays, it’s hard to stick to a format that works best across platforms. I cut up my comics into carousel posts for both Instagram and LinkedIn (though LinkedIn will only accept PDFs for now). It can be quite time-consuming. Some artists show a preview of their comics on social and send users to their website to read more. But I think it’s likely not everyone is going to click on an external link.

Many websites such as WebToon and even The Guardian (such as in this feminist comic) focus on a vertical scroll to make it suitable for reading on mobiles.

If you’re drawing for publication in a newspaper or a magazine, it’s better to work according to their size guidelines. While print newspapers typically had comics in the horizontal strip format, a lot of them are now becoming open to publishing larger and longer comics.

5. How to create a comic strip: Be genuine, be fearless!

Whether you’re drawing from real-life experiences or creating fantasies, I think the best approach is to be brutally honest in your work.

I once told a friend of mine that I was upset that nobody really gets my comics. He said, “You’re ahead of your time. True artists are never appreciated in their time. They’re always misunderstood.” (Or maybe my works sucks… but that was such an ego boost!).

But what I’m trying to say is: just be you. Don’t try to imitate someone else’s script or drawing style or stories or ideas. I find it terrifying to part with a piece of myself every time I make a comic and put it out in public (well, you don’t have to put it out in public if you don’t want to). But the more I draw, the better I get at matching the output to the story in my head. And I find that thrilling.

There will always be people who like your work and those that don’t. Don’t be afraid to say what you have to. The human imagination is so fertile and rich, and putting your world out there adds to the incredible forest of stories and ideas we have growing around us. You never know whom you might impact. And you don’t how good you’re going to feel once you finish drawing that comic you started. It’s a rewarding, unpredictable journey that offers so much fulfilment through self-expression and self-discovery. 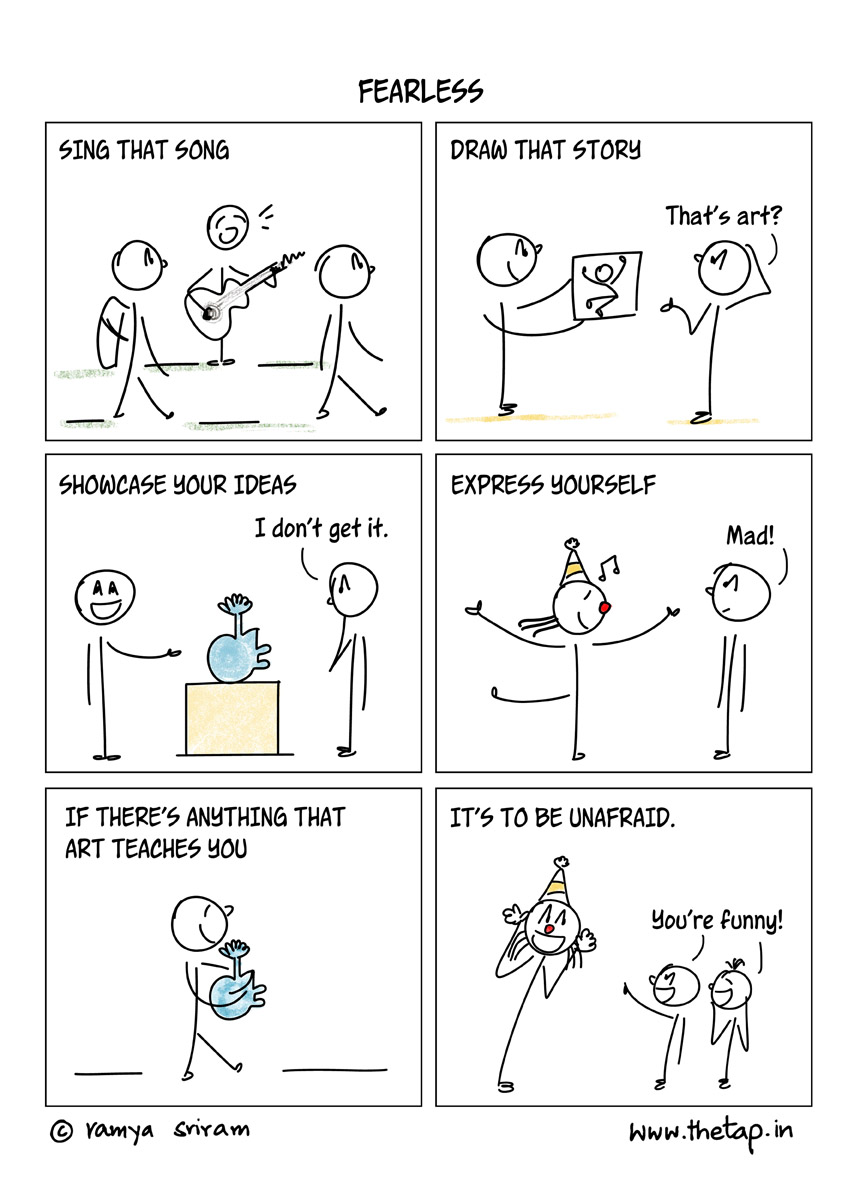