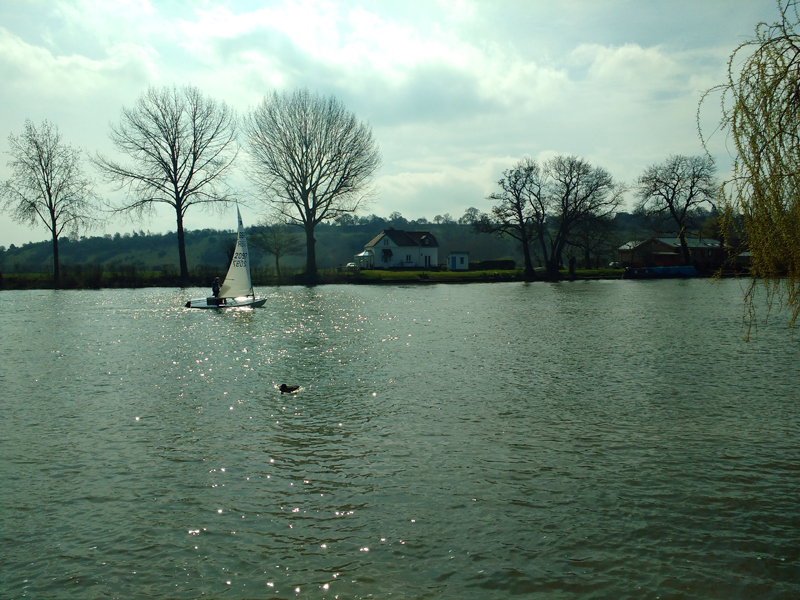 The Bourne End to Little Marlow walk takes you through the peaceful Spade Oak reserve and stunning Thames valley views. It’s a quintessential Chilterns walk, one that I’ve gone back to over the years.

I was introduced to the concept of circular walks a few years ago when I moved to England. One of the walks that I’ve grown particularly fond of over time is the Little Marlow walk, a fairly easy walk which is fun most times of the year (except on really hot days). The Spade Oak Reserve promises sightings of interesting birds: I saw my first black swans and my first Great Crested Grebe there. And this was before I became a keen birder! Even though the walk only 3 miles long, it’s worth it.

My partner and I lived in Bicester then, an unassuming town in Oxfordshire. Bourne End was an hour’s drive away: when we reached the station car park, we were pleased to find it empty. The route starts off on a narrow muddy path which takes you to the riverside.

The first stretch of the walk is along the Upper Thames way and takes you past the marina. There are some pretty and funky-looking houses either side of the river, which made us quite envious (“When we’re old and rich….”). The river was full, brimming with diamonds of sunlight. White sailboats glided past, against the backdrop of still-wintry trees.

The route opened out into a large meadow: a dog’s dream. A cocker spaniel, wet ears and all, bounded across the grass like it was experiencing freedom for the first time. A border collie jumped into the river to fetch a ball and shook itself vigorously below a weeping willow. A row of geese patiently stood in line to enter the water. (A year later, the geese were still there, seems to be a place they know as home.) Ducks, coots, swans: they all seemed quite happy here.

As we walked along the hedge towards the railway line, we spotted a few cows grazing in the distance. I hurried, still nervous from my recent experience of being chased by a group of angry, protective cow-parents. Once we crossed the railway line, we found ourselves on a muddy path that wound itself round a beautiful lake that mirrored the sky. Flanked by reeds, The Spade Oak lake is home to a variety of water wildlife. Previously a site of sand and gravel excavation, the gravel here was used to build an extension of the M40, which ironically is the motorway we took to get there. The Buckinghamshire Bird Club volunteers in the area, aiming to develop the area as a safe breeding ground for birds. Going by what I saw, it looked like they were doing a great job. In the distance, there was an island on which hundreds and hundreds of Canada geese were gathered. We stood for a walk close to the margins of the lake, hoping to spot some rare birds. While only a few mallards showed up initially, a pair of curious black swans came up to us eventually. (Three summers later I went into raptures when I spotted my first Great Crested Grebe here. No mating dance, but it seems like a great place to catch one.)

The path (which leads further up to Little Marlow) eventually reaches a paved road on which we walked for a short while before turning back into a field. The hard tar is a bit of a shock to the feet after walking on mud for a long time. We were only too happy to stop at the Spade Oak pub to tuck into pizza and chips, and possibly the best Aperol Spritz I’ve had.

This is a good walk to do in early spring and early summer. We tried to do the walk in peak summer: but it was incredibly hot and weirdly smelly, though the ice-cream truck at the beginning of the walk provided some relief. I suspect it must be a beautiful walk to do in winter, especially if it’s snowing.

My favourite part of the entire walk is strangely just the initial stretch by the river, which is nothing spectacular in itself, but if you catch it on a day when the light shines at just the right angle, it seems like a place worth skipping the Sunday lie-in for.

Get more information on the Chilterns AONB website here.