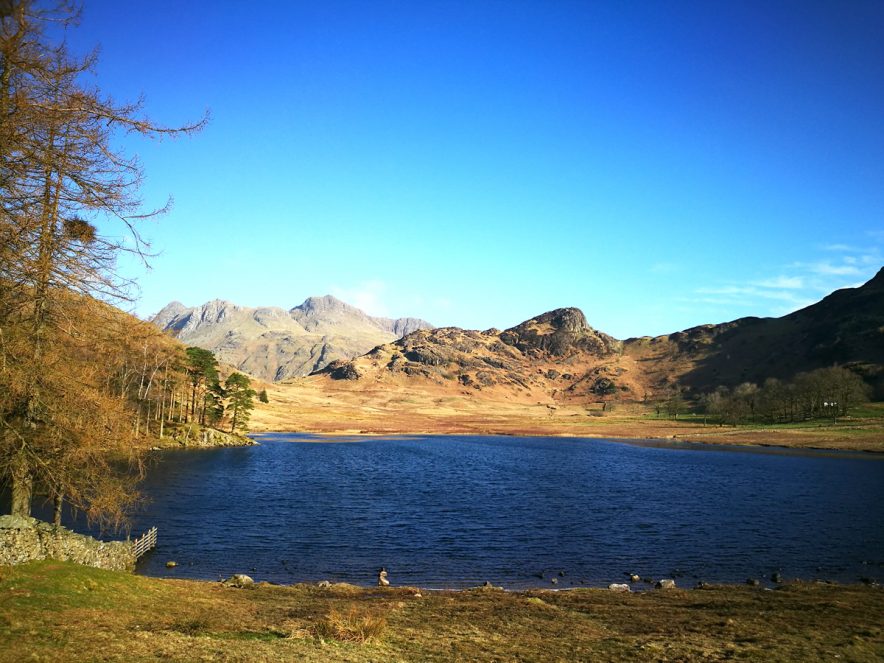 Blea Tarn in Little Langdale is probably one of the most spectacular lakes I’ve ever seen. It’s a place that’s hard to describe without using one too many adjectives. The tarn is not the easiest to get to: though it was only an hour away from Ambleside, where my partner and I were staying, the drive was fairly tricky, uphill and narrow in parts. There are variety of walks in the area (see National Trust) but we only did the short walk around the lake, which was beautiful in itself.

Keeping up the tradition of always being the first to arrive at any National Trust car park, we got there to find the car park empty, even though it was late morning by the time we arrived. From the car park, the lake looks like a giant, shallow puddle, flanked by trees. It’s only when you get closer that you realize the tarn is quite huge, and is supposed to be 7 m deep. (For reference, the deepest tarn in the Lake District, Blea Water, is 61 m deep.)

The valley of Blea Tarn connects Little Langdale to Great Langdale: in the centre of the frame I could see the famous Langdale Pikes. It was fairly chilly for March. The thing that stood out for me was the deep sapphire blue of the waters: it was dark, yet strangely iridescent. The group of pine trees that stood beside the lake seem huddled together for warmth, thick and lush. A gravelly path led to the woods, through a fence. It was incredibly quiet and serene, except for the tit-tit of a robin.

From the woods we got closer to the lake, which rippled with the waves of the wind. Some parts of it were curiously undisturbed and still, so there were patches of smooth mirror-surfaces. While it was tempting to settle down there and let the creative juices flow, I found myself too overwhelmed to be able to think of anything. Though Blea Tarn looks very postcard-y and tame in pictures, there’s something about the place that can only be felt: a sort of overwhelming calm. No wonder then than it won a place in Wordsworth’s heart, who referred to it as “a liquid pool that glittered in the sun” in The Solitary.

The sun plays a massive role in defining the colour of the landscape here, as it rose higher in the sky we watched the shadows move across the lake and the fells, parts of it completely blacked out at times.

A small stream, Bleamoss Beck, runs out of the tarn. The footbridge over it provides a nice meditative spot: I hoped to see a rare bird or two, but even the birds seemed to be hiding that morning.

We didn’t climb Lingmoor Fell or Pike o’ Blisco as we were short of time but it’s definitely something I want to go back for one day. We were very lucky to have had the tarn to ourselves that morning and experience it without a hurried agenda or a summit to achieve. Even with a prominent place on the map, a National Trust car park and plenty of Google reviews, Blea Tarn still feels like a special, personal secret.