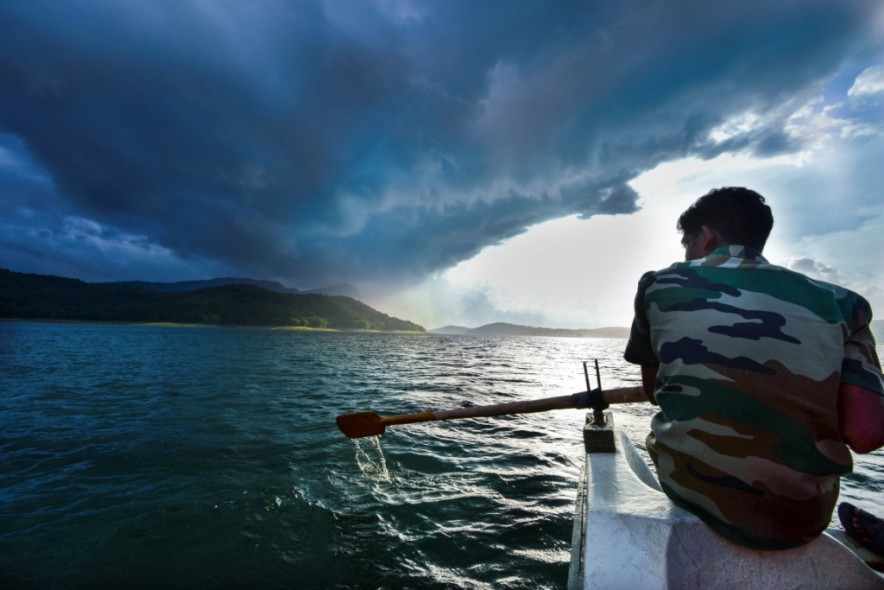 Staying at Parambikulam Tiger Reserve, one of my favourite places in the world. A version of this story, titled “Fiercely protected, fearlessly wild”, was first published by The Pollachi Papyrus on 21 October 2015. Read it here. 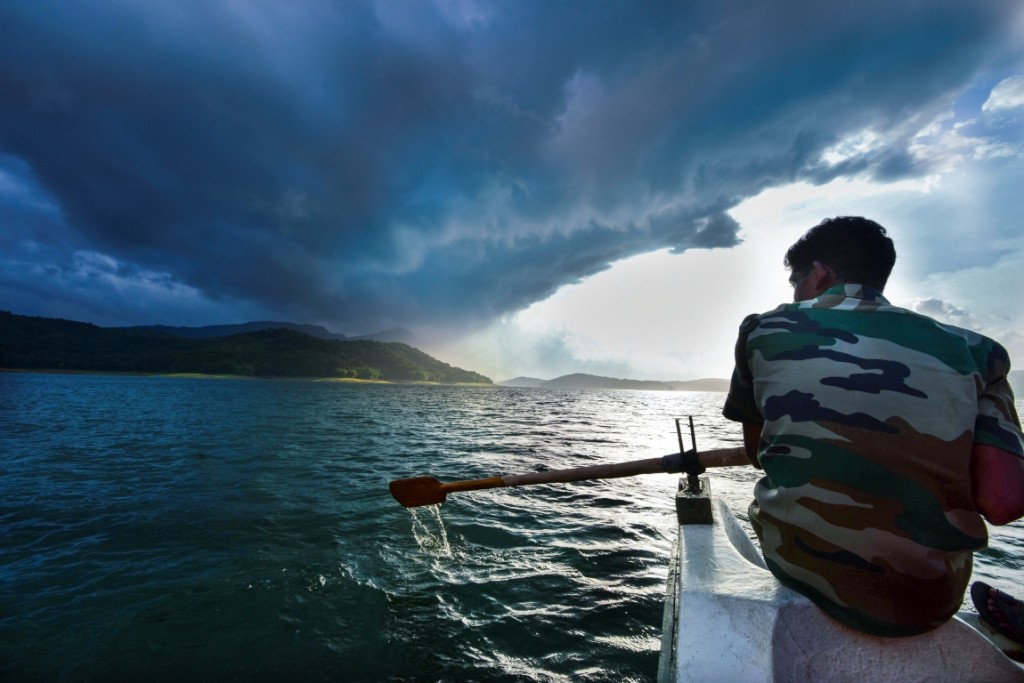 Spread over 640 km2, and surrounded by forests on all sides, the Parambikulam Tiger Reserve is home to a large number of endangered and endemic species – tigers, elephants, langurs, macaques, bears, bison, deer and various birds, flora and fauna.This is my second visit to these forests and I’m here to stay for a night at the Veetikunnu Island with three wildlife enthusiasts from Pollachi. The reserve is a 90 minute drive from the town, and I think how lucky these guys to be able to reach a forest in the same amount of time it might take me to commute to work back in the city!

We drive via Top Slip and Sethumadai, a scenic route through the Anamalai Hills. At the Annapaddy checkpost, the vehicle is checked for plastic, and a guide from the forest department climbs into the jeep with us. Visitors aren’t allowed to enter the reserve unescorted, largely to protect the animals from overenthusiastic or insensitive humans. The Thunakadavu reservoir, which features crocodiles and otters, greets us as we enter. A treetop hut sits on its banks, a popular accommodation option in the area. We wind our way up to the Parambikulam dam among teak and bamboo forests, spotting Nilgiri langurs on the way.

It takes an hour and a half to row towards the Veetikunnu island (Veetikunnu means rosewood, a tree native to the area) lies in the middle of the Parambikulam dam, whose waters cover an area of 89 km2. 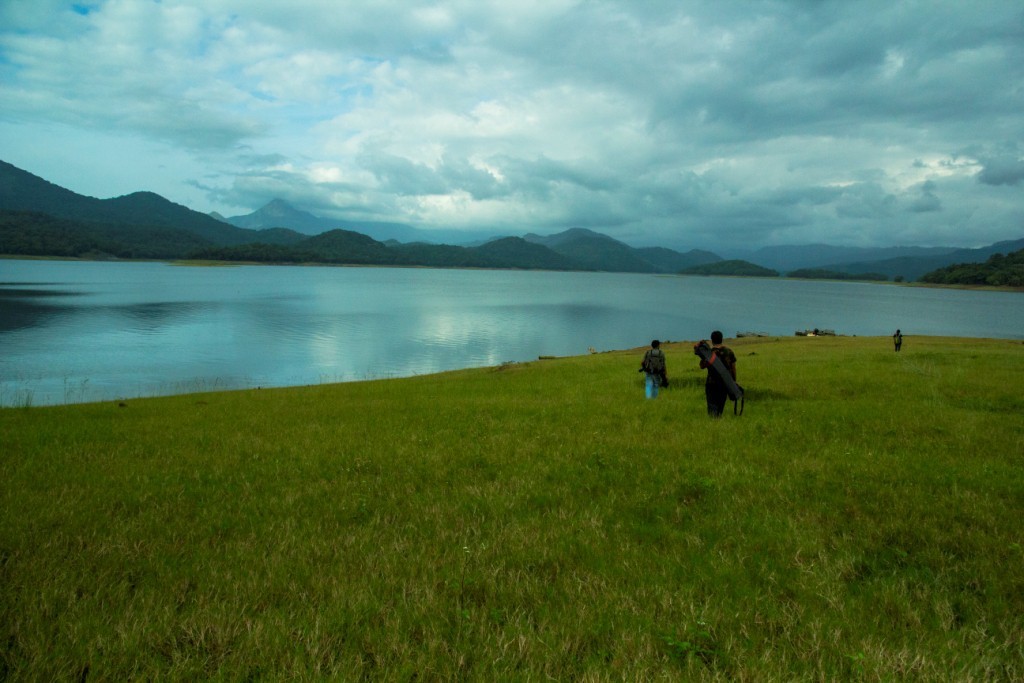 The lake is a marvelous blue, a sheen of calm that seems to mask the 145 feet of depth below. ‘Still waters run deep’ comes to mind. It’s flanked on all sides by forest-covered hills of all hues, upon which clouds perch. 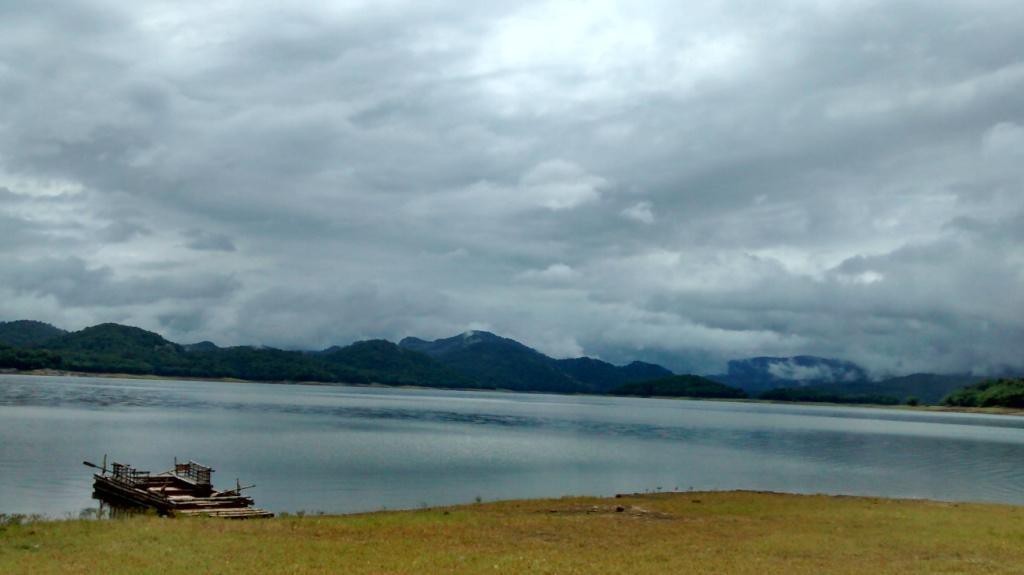 Along the way, we make conversation with the boatmen, all of whom belong to the Malasar tribe. The forest is home to six tribes – the Kadar, Malasar, Malamalasar, Muthuvars, Irulars and Pulayars. Most of the guides belong to the Malasar tribe.In a sustainable move, the forest department developed a model where the natives themselves were educated about the importance of conservation, and ended up playing a crucial role in conservation and tourism. After all, who can guide visitors better than the original inhabitants of the place? An Eco-Development Committee was formed, and the tribals were employed as guides, cooks, etc., which gave them an alternative means of income. Manohara tells us that there has been a sea change in the lives of the tribes – they themselves are the “guardians of the forest”. Tourists do not pose a threat to them, but are treated like guests. The pride in his voice is palpable. 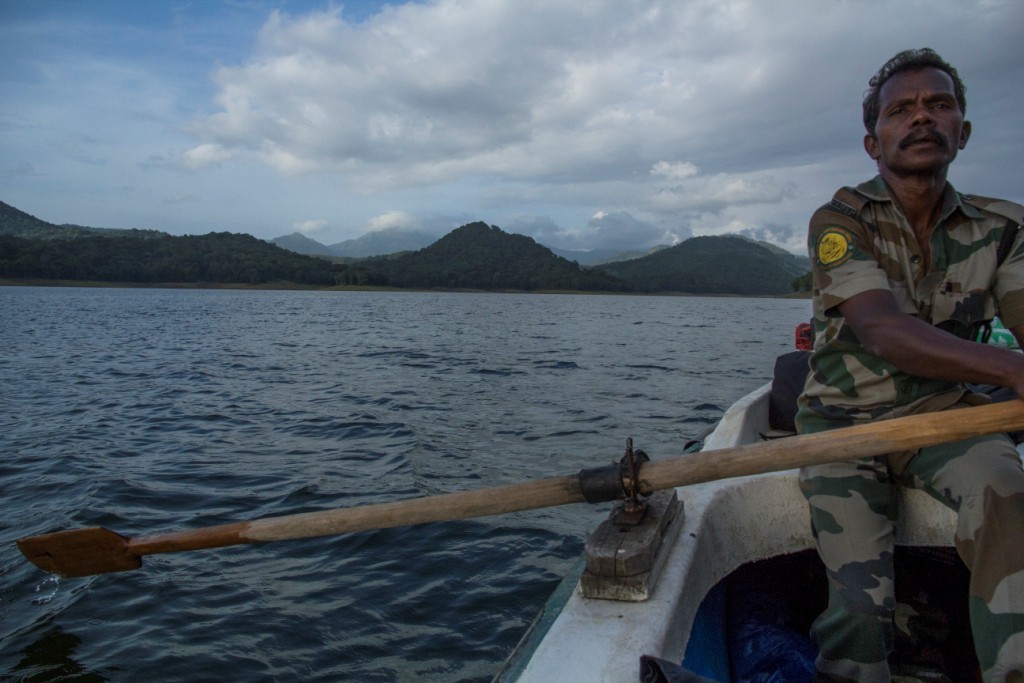 Despite that, most of the tribals have converted to city/urban life, we are informed. How ironic! Here we are dreaming of a romantic life in the forest and the tribes have already moved out and on. Something about the grass being greener, I guess. Well, at least in this case we know for sure which side the green literally lies. 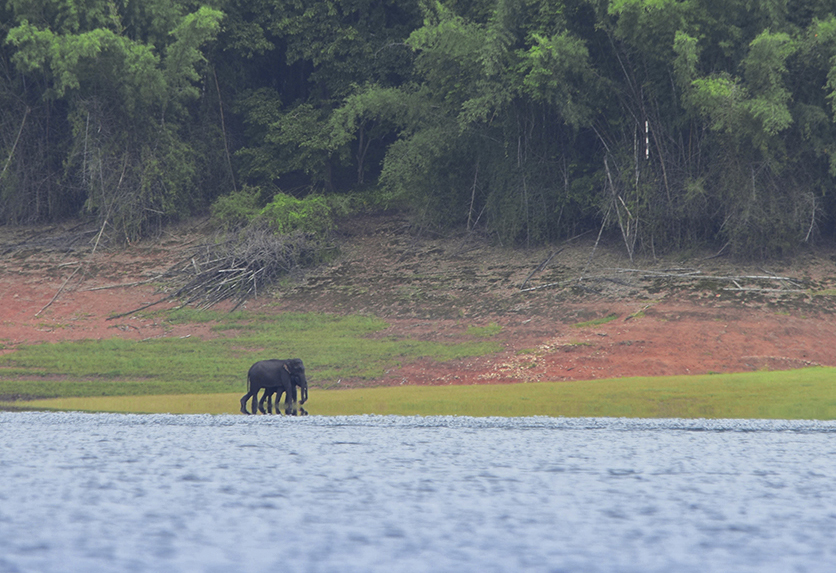 As we row on, the island comes closer, is a seemingly impenetrable pyramid of green. Our guide, who’s been scanning the hills periodically, suddenly exclaims, “Yaanai!” and points towards the waters between two islands. Sure enough, we see two blobs with our naked eyes – elephants swimming! Through the binoculars, I can see an elephant and its calf making their way from one bank to another, with their trunks sticking out. The action went on for a good half hour, with a good deal of splashing about. It’s an inexplicable high, watching these animals in their natural surroundings, completely at peace and ignorant of any human threat. I’ve seen elephants in the wild many times before, but this is something else – it transcends anything I’ve seen before. We watch in silence till the duo reached the shore. They stand for a while, waiting to dry up. Within minutes, it starts to rain, and parent and child disappeared into the forest. 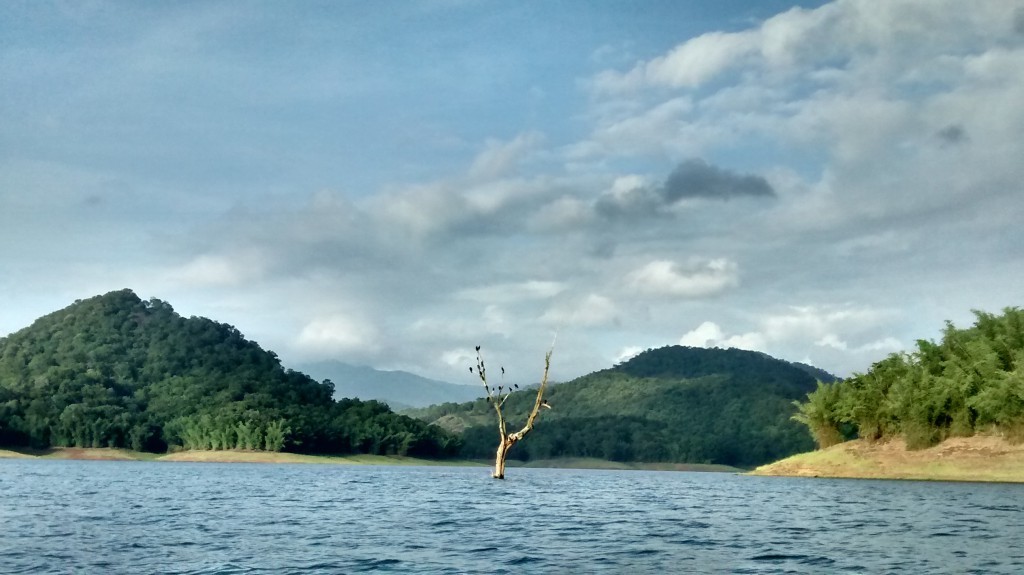 From the middle of the reservoir rises a tree, on the bare twigs of which Great Cormorants in plumage sat. As we reach the island, we see a small blue roof sticking out among the trees, our abode for the night. 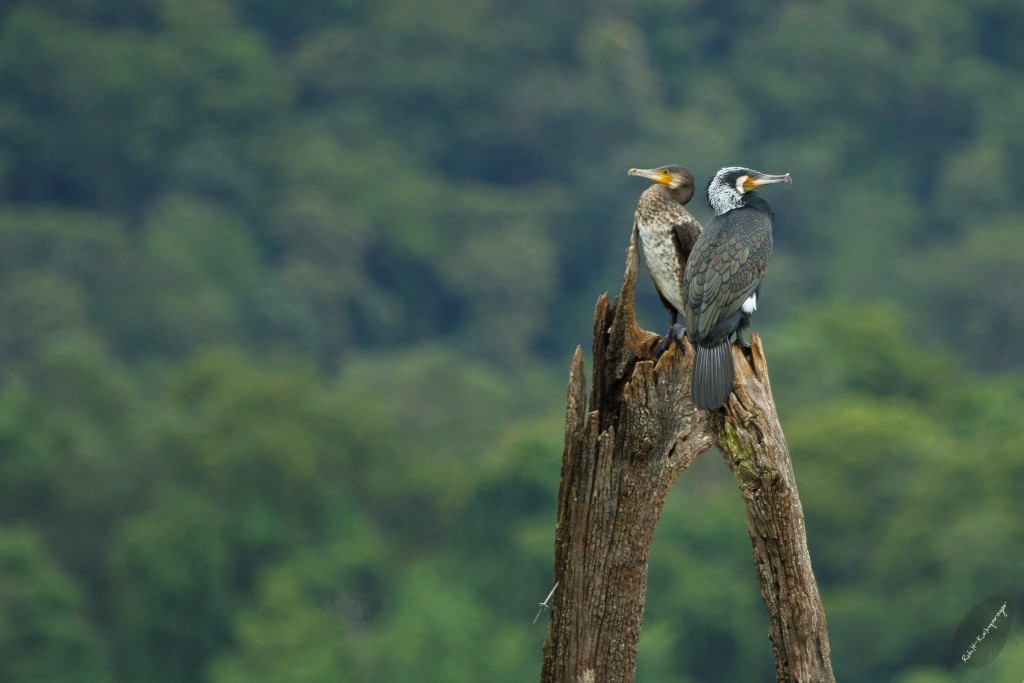 We dismount the boat on the island, which seemed to house no other soul, and start walking up the steep hill towards the ‘Nest’, the guest house. The Nest is surprisingly anything but rustic. A trench is dug all around it, with a log bridge across .There is electricity (solar) in the big room (with 5 beds) and two bathrooms which boast of tubelights and some very large spiders. Bamboos creak occasionally, like doors in horror movies.Otherwise, the silence on the island is striking. 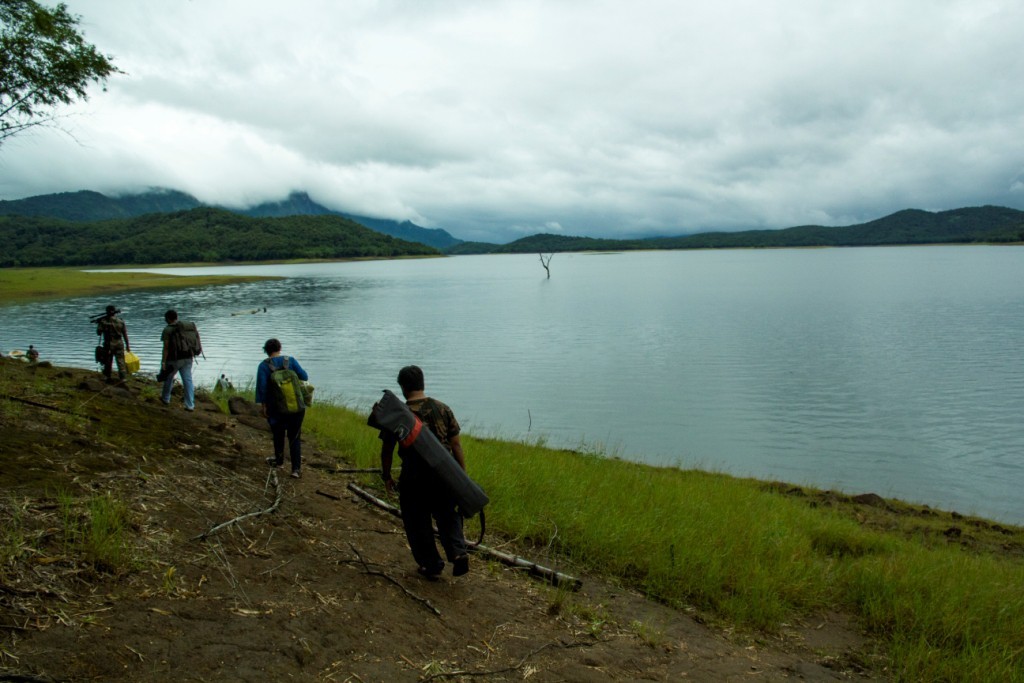 We walk back down to the dam, which is now the blue of a watercolour painting.No motorboats are allowed in the dam so as to not contaminate it with oil – this is pure drinking water.I scoop out a handful of water and drink it – it’s clear and sweet. We watch the evening set in, sweeping across the lake towards us. It grows darker, and we settle on the porch, watching the greying sheet of clouds mist and rain come closer and closer, and blocking out the horizon in layers as they approach us. Soon enough, great big drops of water splash all around us. 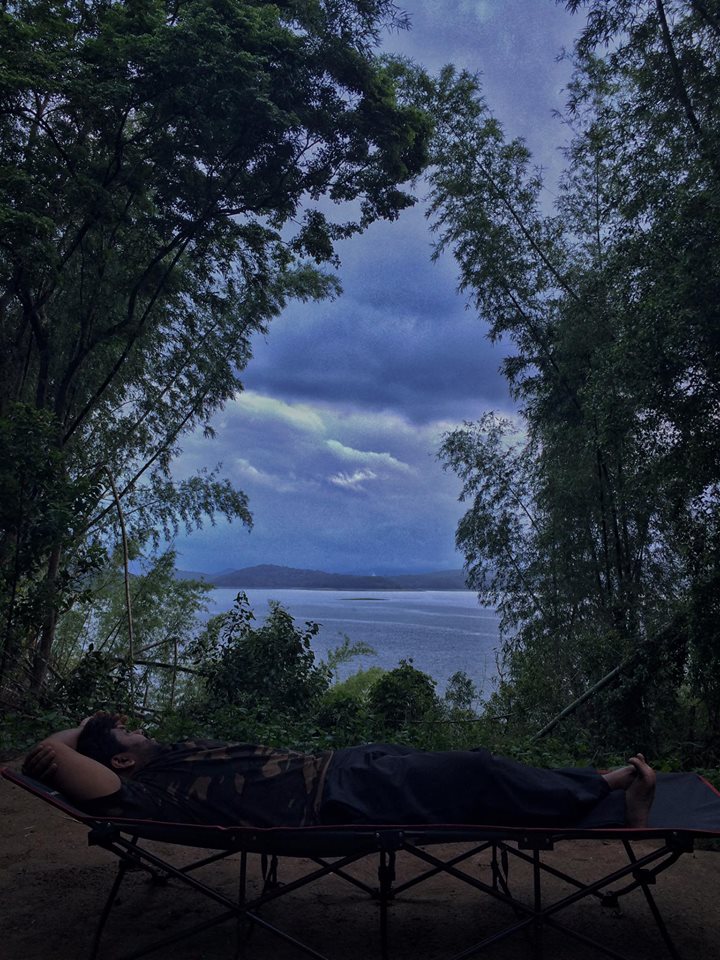 Night falls quietly, save the persistent creaking bamboos. We tuck into a good dinner(which we had packed – you have to take or make your own food), while exchanging stories. We speak to the tribals some more, who actually managed to get some fresh fish off the waters!

We retire for the night – there are even mattresses in the room. While the others snore, I lie half-awake, listening to the tak-tak-tak of some mysterious creature and the sounds of lizards.I’m sure I there are bats hovering above me, judging by the silent moving shadows.

The next morning I am awoken by a loud cock a doodle doo, and go out excitedly to meet the fowl, only to discover it was somebody’s alarm. We walk around the forest a little bit, spotting mostly jungle crows and hearing the occasional call of a juvenile black kite. The morning colours of the island are a soft rain-washed green. It is a pity we have to check out early. 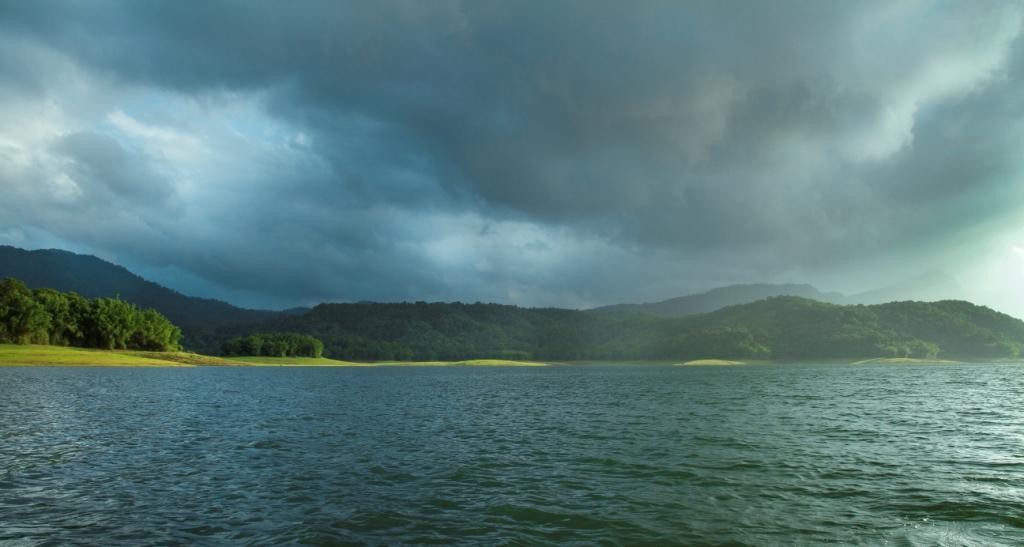 The boatmen point out to the hills as we row back, showing us how Parambikulam is protected by forests on all sides – Nelliampathy, Anamalai Tiger Reserve and Kodaikanal. The Parambikulam Tiger Reserve has won national awards for being one of the most well-maintained reserves in the country, they tell us, swelling with pride. I am awed by these people, who know the forest inside out, and I’m even more impressed at how fiercely and passionately they protect their land. And it’s no wonder that they do. This forest is their home; it’s in their blood.