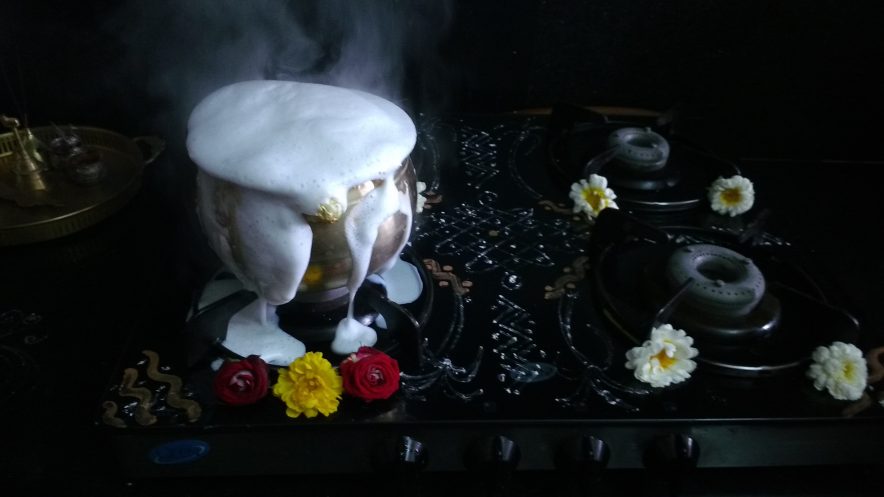 In this article, part of a series called The Reluctant NRI, I write about my experience moving abroad and missing friends and family. It’s  not as simple as “missing” people and places though — I think it’s more a case of being absent from a scene you want to be present in. An NRI is a “Non-Residential Indian” — an Indian living outside of the country. Though this is written within that context, I suspect it might be relatable for students, expats, and anyone who has moved overseas. *The cover image is the festive celebration Pongal, a harvest festival, in which the milk boiling over represents an abundance of all good things.

One of the things that really sucks about moving out of your home country is being absent from events relating to family and friends back home. There are a dozen arguments that can be made about staying connected, regular calls and catch-ups, how distance doesn’t define closeness, how geographical boundaries don’t cage friendships, etc. And I agree with all of them. But sometimes it just sucks to be far from (what you’ve known as) home. And I think it’s great for people to acknowledge that it sucks. When I moved abroad I struggled with being homesick and lonely and was too embarrassed to talk about it or accept it as completely normal. How uncool, Ramya! I’d tell myself. Pull yourself together and enjoy the here and now! But that was easier said than done. It was only when I found out that a friend of mine was going through something similar in another country did I think that maybe it was OK to feel what I was feeling.

Life goes on without you

What really drives home your glaring absence is when you can’t be there for someone who needs you. In the initial years of my being away I had close friends go through illness and loss, weddings and divorces. I saw friends go through happy childbirths and traumatic miscarriages. While you can find ways to support your loved ones from a distance it also sucks to not be able to physically be with them even if only to spend a few minutes in silence or have a cup of tea together. Unless you’re super rich and can afford to make quick trips back home with minimal disruption to your bank balance, health, and work life, it’s really hard to be there in person even if you really want to.

Sometimes when my mum calls and tells me she’s feeling low I start feeling low myself about not being there in person. I’m not sure how much that would change if I lived in the same country but at least I could take a 2-hour flight instead of a 12-hour one. And oh the fear and guilt and baggage that comes with being so far, of being inaccessible. When someone is ill, it’s terrifying. In some cases it makes you feel so helpless.

One of my close friends who went through a tough time recently mentioned (unwittingly) that if I’d been closer to her I would have been of more help. I felt my heart sink, break a little. But life goes on, ignorant of your absence. People move on, just like they should, just like you should. It seems almost cruel, how life carries on relentlessly even without you.

Sometimes when your own life seems to be on pause for a while, look around and notice how others’ lives continue as though nothing happened. Makes you think.

Rediscovering home, in people and places

As someone who lived with my parents after university in the home I grew up in, I think the definition of home was always a concrete, tangible, solid thing. Pressure cooker whistles from the kitchen, the neighbourhood squirrel chirping, the apartment lift beeping. That was the soundscape of home. Though I travelled frequently, I always had a fixed place to come back to, a point of return. A place of permanence that anchored me.

But now home has become a moving, fluid, flowing concept. Maybe it always was? Maybe the definition I had for it was too narrow before?   I long for the Western Ghats forests and waterfalls that I’ve known so well… as much as I long for the pressure cooker whistles and the monkeyspeak. I miss the birds in my garden in Loughborough (where I lived earlier) as much as I do the beeping lift back home. Maybe I always had multiple definitions of home and just didn’t know it back then. I’ve realized I tend to form quite intense bonds with the places I’ve lived in, having known them intimately. The know the feeling of running my hands along the bark of the trees I’ve loved, or the feeling of grass beneath my feet. It’s like a place is submitting to you, saying hey, here’s a piece of me. It’s a complex relationship, a kind of romance. I like the comfort of having one fixed place to call home but also be able to afford the romance of exploring other landscapes and what the earth has to offer. Maybe it’s like being in a polyamorous relationship, in which you have a primary partner. But I digress…

Growing up I was determined to not go abroad, so much so that I didn’t pursue in career in biotechnology because of it (thank god, or I probably wouldn’t be running a comic strip now). I always told myself I’d be around back home, being easily accessible to my parents, maybe even teaching or being part of an NGO/charity. But that has now changed, and now there’s a gaping gap between the envisioned me and the real me. And that becomes a part of my everyday struggle. But what I’ve realized is that I cannot be in two places at once — a very obvious thing to state, but putting it down in writing makes it more obvious.

Before I moved, the people I surrounded myself with were real, present. Though I had a plethora of virtual/online friends, I had “real” friends whom I knew in flesh and blood and whom I could hope to meet, if not in a day, in a week or month or couple of months. Friends who knew me. We had an idea, even if vague, of what was happening in each other’s lives. With friends spread out now all over the world it’s even harder to be clued in on what’s happening with everyone. The distance, timezones, general everyday stuff that we’ve got to do, the tiring routines, new anxieties and worries… all of these turn conversations into “nothing much” responses. People are busy, everyone’s short on time. We’re more guarded about what we share, for multiple reasons (more on that here).

The first time I met someone whom I suspected would become a close friend in the UK (and she did), I remember the thrill I felt. A real person! With a physical shape and form! In the same city! We could even meet for a cup of coffee and talk face to face! Aaaa the excitement was dizzying. It took me a good four years to get to that point though. 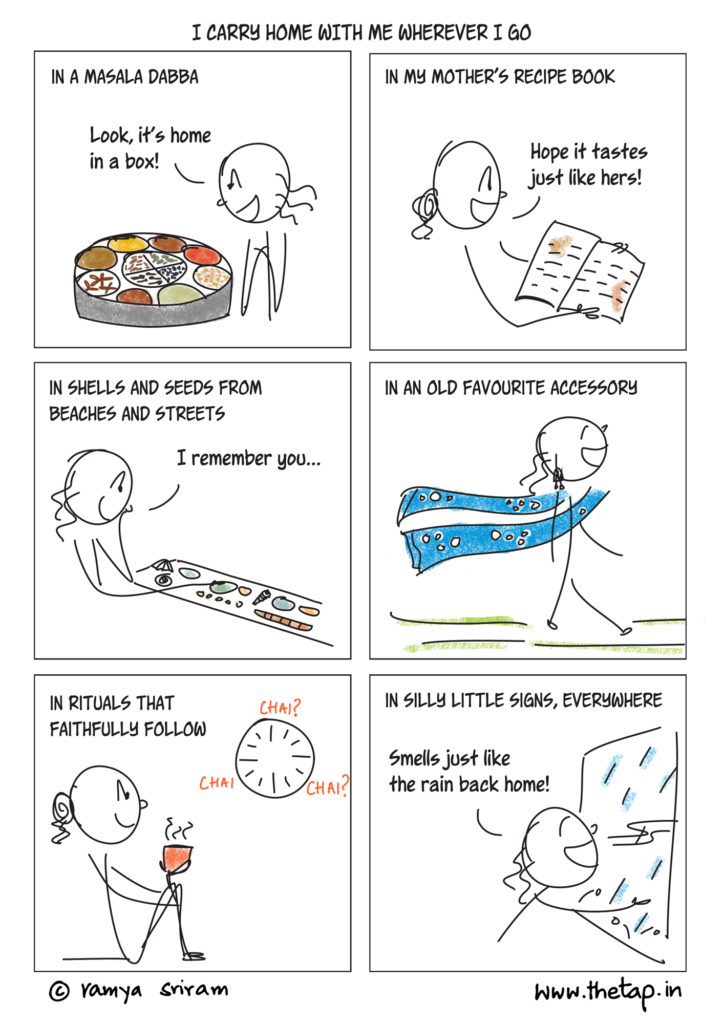 Growing up, Diwali was one of my most disliked festivals. I hated the noise and the smoke, the whooshing rockets that just about missed my nose while I stood in the balcony, the howling dogs, the frightened, chattering monkeys, walking in the street the next morning wondering what was going to explode beneath my foot, the litter from the ladis. But every Diwali I tear up thinking of the diyas and rangoli and food back home. I’ve now found ways to battle that by creating my own version of a Diwali celebration — we all work this out eventually, of course. 🙂 But it’s still OK to miss home and miss that atmosphere. I’ve always pushed myself to do something because I thought moping around on Diwali was inexcusable. But now I know that it’s OK to mope (only for a few minutes though haha).

To sustain a relationship for a long long time, I think it’s important (at least for me) to meet at least once in a few years. And I believe that applies to places as much as it applies to people. Just like in friendships, individuals change and you have to invest in catching up with the new avatar, how a person has evolved or “weathered” under new influences and change, you have to invest in catching up with a place. Every time I go home, the place I grew up in, I notice something different. That old shop has now shut down, that bumpy road has been repaired. I find comfort in the mango and neem trees that are still going strong, complete with their resident monkeys and bats. The neighbourhood squirrel (or rather, its descendant) chirps on a hot afternoon, the beeping lift is still as annoying as ever. I wake up early and take in that early morning freshness — of a city waking up as women wear flowers in their hair and go to the temple, of the chaiwalas setting up their stalls for the day, of aunties in salwar-kurta and white sports shoes going for a brisk early morning walk.

I find a huge sense of relief in how accessible I am to the people I love. If someone is ill, I’m right here. If someone needs to have a chat, here I am on offer! Woohoo! All of me, body and arms and face and skin. Call it self-importance, but I feel great  going back to a scene where I want to still be wanted, still be needed. Please don’t cut me out, old home.

I meet old friends (or what’s left of them) in town. We get coffee, we go for a walk. We sit down and have a meal. We’ve changed. We talk about how life has moved from point A to point B (after going around to Z and M and others in between, as it always does). We talk sitting across the table, we swap stories and smile and laugh and joke and sing along to the bad songs that the restaurant is playing.

I’m talking to someone in 3D, not on a screen. There’s no red button to press to end this conversation. I’m here. I’m keeping up.

IRL, I tell myself. What a magical thing.

We noticed you're visiting from Germany. We've updated our prices to Euro for your shopping convenience. Use Pound sterling instead. Dismiss