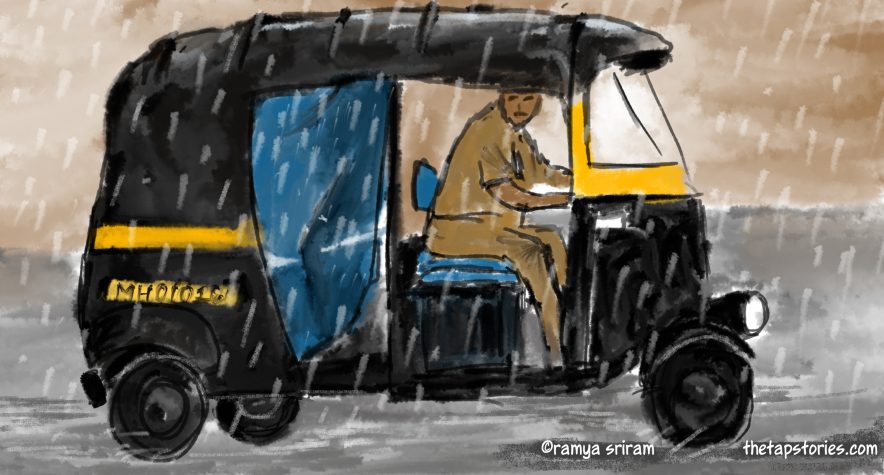 A long rambling about being homesick in the UK, and missing the sights and sounds of India. Part 2 of the “Reluctant NRI” series. Read Part 1 here.

The first thing that used to come to my mind when I’d hear the term ‘NRI’ was someone holding a bottle of Bisleri water. I was prejudiced for a bunch of reasons. An NRI to me was someone who came back to India to constantly grumble about the heat, dust and inefficiency. An NRI was also someone who was given preference during room allotments in our college hostel, and always got the one I was eyeing.

Six months ago, I found myself stepping into a little-known town in the UK, remembering that word just the way it came out of my bank manager’s mouth — you need to convert your account to an ENN-AARR-EYE account. What a dreaded term! Over the months that followed, I found myself wondering what exactly it meant to be Indian, resident or not.

I’ve lived for half a year in a village/small town in England, and I’ve got some more time to go. A few months isn’t much, but it’s been packed with an unusual number of questions, answers, more questions, confusion, seeking, wanderings and ponderings.

The absence of people was the thing I found most difficult to get used to. Suddenly there was no watchman, milkman or paperman; there were no autowalas, maids, grocery shop uncles, kolam-drawing aunties or friendly neighbours; no people spilling out of buses, no people on Scootys, no people at petrol bunks. No people. The lack of human interaction was stark. And then there was no ‘noise’. The soundscape changed entirely. Where I live in the UK, I hear the birds and the whooshing of cars in the distant motorway. Where I live in India, I hear temple bells, the mosque prayers, the raddi-wala chanting ‘paypaaar payyyypaaar’ every morning, somebody fixing a door upstairs, the elevator beeping as it waits for the door to be closed, honking (so much honking), dogs barking, kids playing cricket outside, and that general “India” sound which is never silent, even when everything is quiet.

An Indian homesick in the UK

When I felt the waves of homesickness wash over me, I would imagine myself landing in India and kissing the ground at the airport dramatically, and bursting into a song about mere desh ki dharti. (When I actually went back home, what actually happened was that I walked grumpily, sleep-deprived, in the most non-dramatic manner, towards the serpentine immigration queue.) I would drift into daydreams of chana chor garam and pani puri, and think how terrible it was that in a country where it rained so much, people didn’t eat freshly roasted bhutta (corn on the cob). I would think of all the dahi-borrowing aunties of my childhood and recall how easy it was to make friends in an apartment. I longed for the simplicity of India (a simplicity that no longer exists in urban India, anyway).

There, I was also suddenly consumed by a passion to know what was happening in India — I followed every news story religiously. Earlier, I lived in a nice little bubble of my own, with selective news filtering through to my head occasionally, but never quite evoking the response that it’s managed to in the last few months. There, I started to look at India as some sort of organism that I had to dissect, pull apart, and understand the workings of.

Another thing I realised abroad — the news that filters out from India to the world is terrible. It makes you feel like it’s this awful country full of bizarre, unreasonable people and it’s very, very disheartening (like most of the news today is). The headlines that perhaps sparked the most outrage there was the incident of the two Chennai guys flinging a dog from a terrace and another bunch burning puppies in Hyderabad. I cried in misery and thought that maybe India is a country full of terrible, heartless people. It’s quite something to move abroad and marvel at the way your country is represented to the world. The stories that make it (and the ones that don’t) define a reality that may exist but alongside so many others. (Chimamanda Ngozi Adichie’s talk says it all).

But some stereotypes are true. It’s true that Indians litter everywhere, anywhere. I read that the council in Leicester (a city full of Indians) has been actively trying to discourage Indians from spitting paan on the streets. I visited Coventry (again full of Indians/Asians), and I was shocked to see that it was full of trash — at least, considerably more than what I’d seen in other places. I don’t think India is the only country with cleanliness problems — but it seems we’ve attached ourselves to that image rather affectionately. What is it that makes us want to throw things everywhere? Is it something in our system? Is it in our genes? I remember during a visit to Cambodia, the tour guide said, “I want to go and be a guide in Benaras one day. But the Ganga is very dirty, no? They are trying to clean it, but I hear that something is still ‘stuck’?”

I had been outraged by Naipaul’s ‘An Area of Darkness’ in college. But now I feel that India has Many Areas of Darkness. How on earth do we bring light to these areas? (Aaya naya ujala… OK bad joke.)

And then this conversation about returning to India continues. I meet people who ask me why I would consider going back to that ‘dirty, unhygienic place’. I meet others who feel that they can contribute a lot more to India, being overseas, and some of them are doing spectacular work. And I meet those who are completely detached, who feel that countries are just boundaries. “The world would be happier without all these borders,” someone tells me, puffing on his cigarette.

I meet an uncle who’s served in the Special Task Force for over twenty years. He tells me where I can get the best dosas. (If there’s anything that unites Indians, it’s food.) I love how we can instantly feel at home anywhere in the world if we can access the food we grew up eating. I meet a British Indian, who’d visited India aiming to explore his roots, and got swindled in Agra. Of course that put him off any future explorations. “Scary place,” he says. “I’m not sure I want to visit again.”

I speak to a friend in India who’s been trying to get abroad with his wife and kid as quickly as possible. “Wahan pe future hai, future,” he tells me. I speak to another young working couple who are moving abroad. “We’ve hated Gurgaon and Bangalore,” they say. “We want a better quality of life.”

And here I am, an Indian abroad, homesick as ever, romanticizing a place that many seem to want to leave. 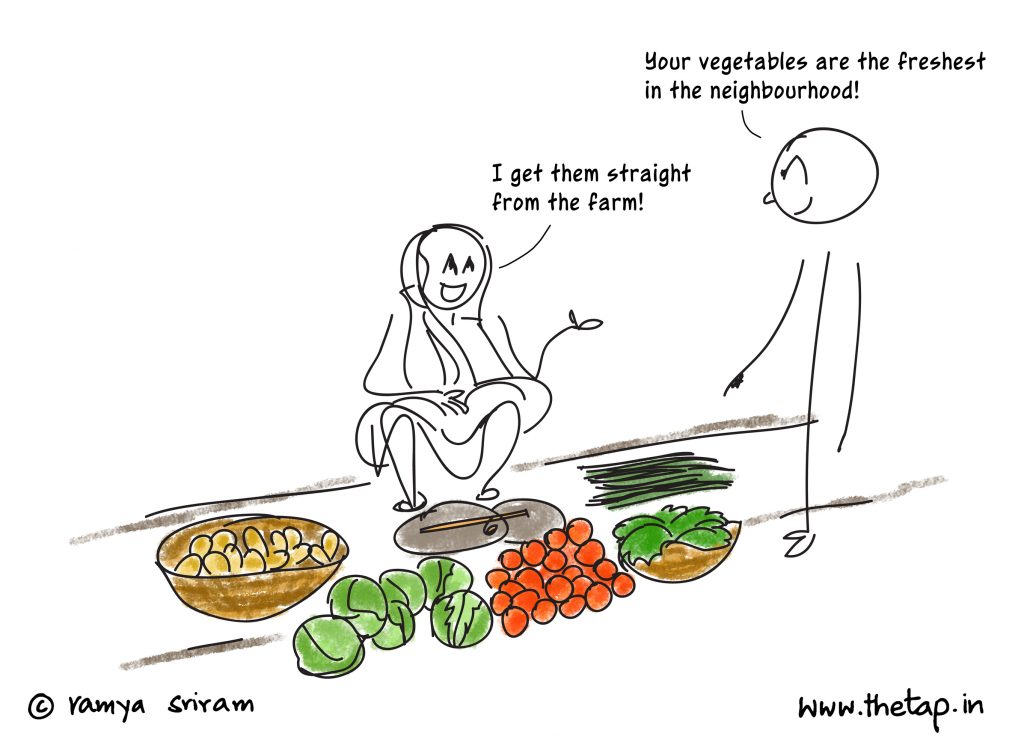 When I go back home, I notice things a lot more than I used to. I see the wrinkles on the hands of the guy who’s helping us park. I hear the raddi-wala, the temple bells, the mosque prayers — and suddenly, I’m overcome by emotion. I consider recording this ‘India’ sound to take back with me. I smell the neighbours making biryani. I admire the resilience of my maid, whose advice when I got married was to ‘be the stronger person’. I watch the smileless man at the hotel taking orders — I wonder how many people have spoken rudely to him today. I see the lady cleaning the loos at the mall, not protected by a minimum wage. I see the long queues at the doctor’s clinic. I hear stories of corporate hospitals swindling people, asking for unrequired tests and scans. I think fleetingly about the NHS. Our maid (it’s great exchanging stories after so long) tells me about her son, who wants to go abroad to study (he’s even done a whole lot of research on loans and exams!). “I have no idea what he’s saying,” she says. “How are we going to afford to send him?”

I see the dhobi’s family, in the same spot under the tree as they’ve been in for years, now with even a pet dog. The banana-seller is in his same place too, and the ice-cream cart is patiently parked beside him. We’re a tough, enterprising lot.

The doorbell rings a hundred times a day — I welcome the milkman, paperman, maid, courier guy, post office uncle, neighbour, dhobi, watchman (“Is it your tap that’s leaking?”). I don’t get quite as cross as I used to.

I don’t feel like I ever left. I feel completely, utterly at home. I once met a Sri Lankan man in Switzerland, whose spoke about the war— “I don’t know what’s happening to my country,” he said, his eyes filling with tears. Once, on a flight, I once sat next to a man who’d just moved to Singapore and missed India terribly. “You can never have the freedom that you have in your own country in any other,” he said. “Do you agree?”

I still don’t know if I agree or not, but one thing’s for sure. Whether I reside in India or not, India’s definitely made me her home.