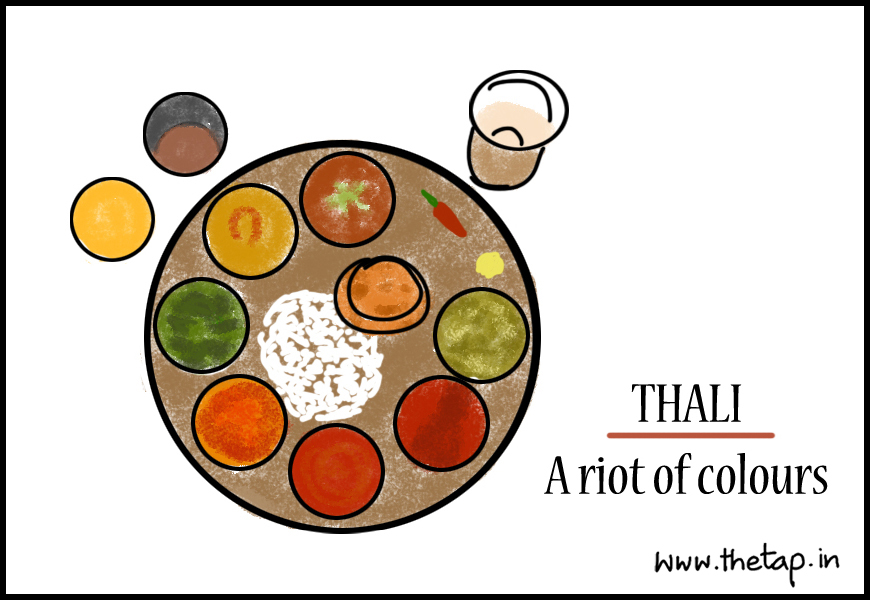 This piece was originally done for the travel company GoMowgli, highlighting Indian food experiences a first-time visitor must have.

From the 36-course Kashmiri wazwan to the simple biryani of Tamil Nadu, India offers to your palate a mind-boggling variety of tastes and flavours. Much like its people and culture, Indian food is highly diverse, with each region having a distinct local cuisine. Read on for must-have food experiences in India, that could lead to anything from gastronomic delight to Delhi Belly (which will be worth its every bit!). 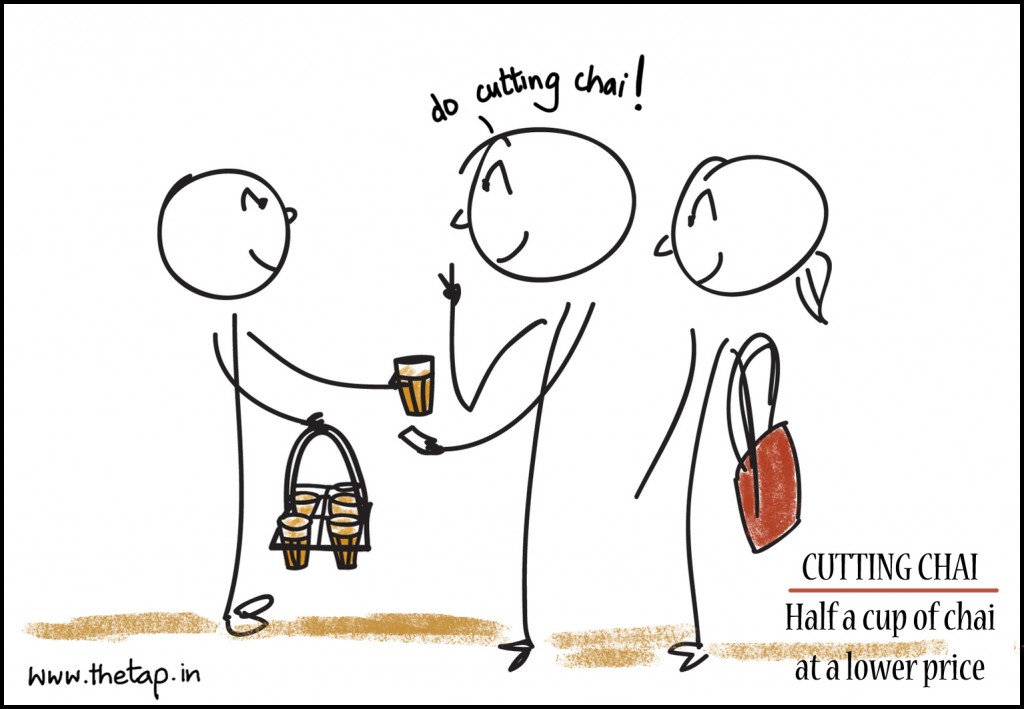 Most Indian faces light up at the proposition of a cuppa chai or coffee. Indians are passionate about their beverages, and sharing a cup of tea or coffee is almost essential aspect of social bonding.

Tea (chai) and coffee are usually had with milk and sugar. Both are grown in abundance across the country, in the cooler climes of the mountains. Drinking chai on the roadside is very much a part of Indian culture across the country – you will find a tea stall on almost every street! In some areas, especially around busy offices, there is a chai-wallah who delivers or sells tea from a carrier.  ‘Masala chai’ is a variation of tea with ginger or cardamom added to it – a must-try! Inside the home, tea is usually offered along with biscuits or savouries. Pink tea or Kashmiri tea is a special preparation of tea and spices, along with baking soda, cooked in a samovar.

South Indians are passionate about their filter coffee, a strong concoction which is prepared by brewing ground coffee in a special, two-storeyed coffee vessel. It is not uncommon for Indians to drink tea or coffee multiple times a day.

The quintessential Indian meal, comprising a variety of vegetarian and non-vegetarian dishes. Each state has its own version of thali, and the dishes vary according to the local cuisine. A thali is usually served in a circular plate with little cups of colourful gravy or dry accompaniments arranged all around. The cups consist of lentils (daal, sambar, rasam), vegetable dishes, a sweet dish or two, and curd. The main course usually consists of rotis, followed by steamed white rice or flavoured rice.  While in North India, especially the Gujarati and Rajasthani thalis, you get a variety of rotis, in South India, the main course is predominantly rice. The thali is also accompanied by friend snacks and/or papad. Consider it an accomplishment if you can polish off each and every dish on your thali plate! 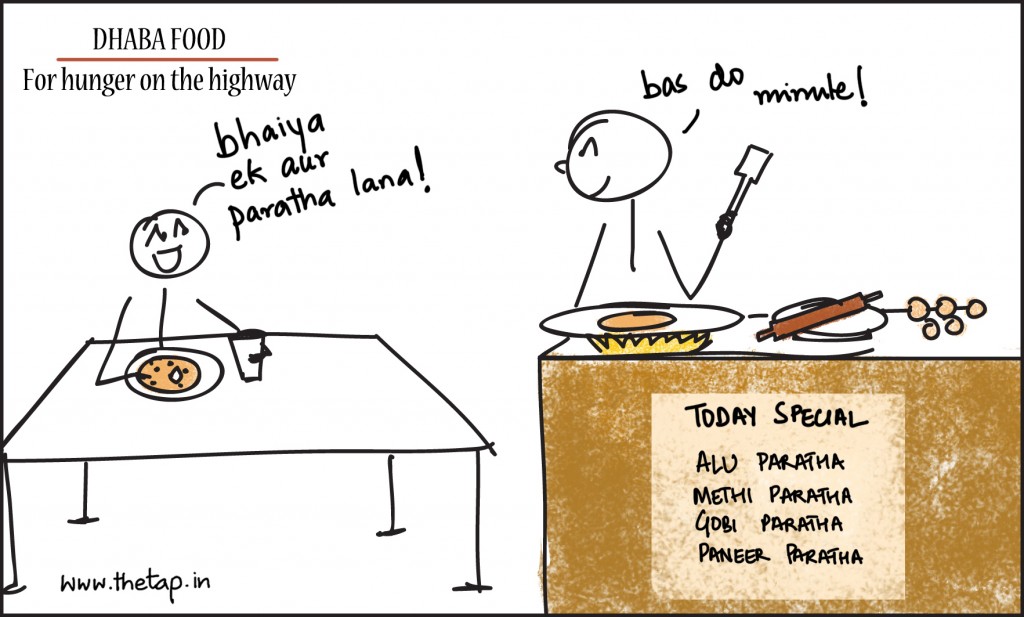 A ‘dhaba’ is a roadside restaurant, popular with travellers and truckers alike. Dhabas usually serve fresh food made to order, hot off the stove or tandoor. They are known for serving different varieties of paratha (wheat dough stuffed with vegetables such as potato, gobi, paneer, etc.) along with butter, pickle and curd. North Indian side dishes such as daal, channa, and paneer dishes are staples alongside tandoori rotis. Don’t forget to try, especially in Punjab, ‘lassi’, a tall cool glass of yogurt blended with water, sugar and sometimes topped with chopped dry fruits. 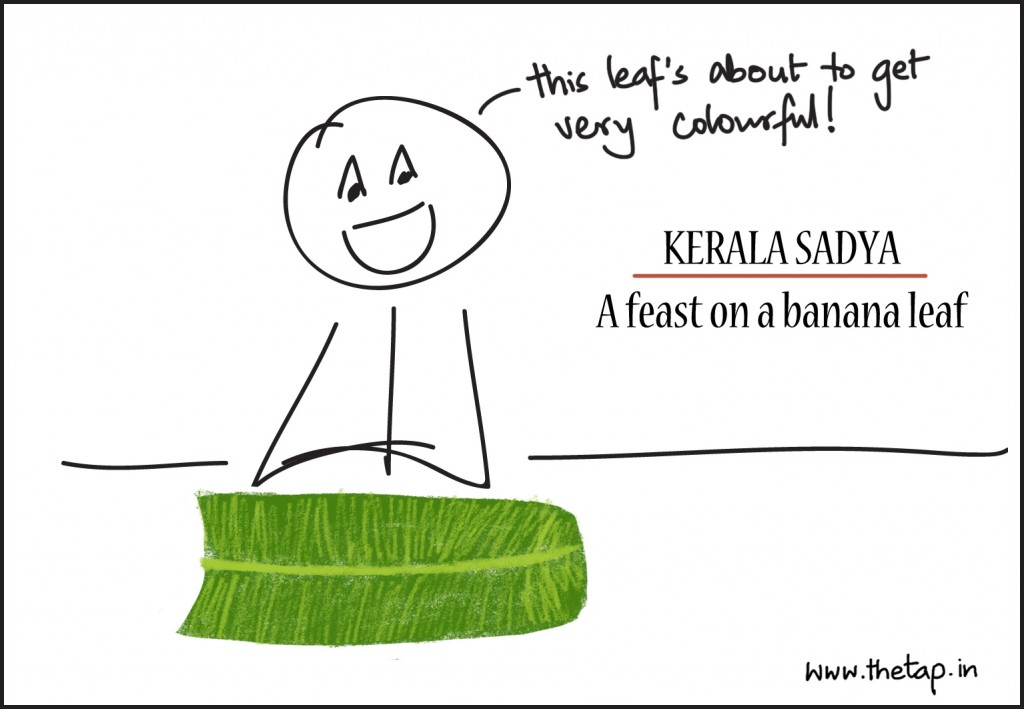 In the land of the backwaters, it is not very often that you come across an entirely vegetarian meal. The Kerala Sadya (sadya meaning banquet), however, comprises an assorted variety of vegetarian dishes served on a banana leaf. It’s prepared during festivals and mostly by men, a tradition hard to come by in Indian homes. Dry curries (with grated coconut) and wet gravies (with coconut milk) are placed on specific positions on the leaf, along with pickles, banana chips and poppadam. Buttermilk (usually spiced) is served in a glass. Most of the dishes are prepared in coconut oil, due to the abundance of coconuts in Kerala. The meal ends with a sweet dish (payasam or prathaman) made from milk/jaggery/other ingredients. Sitting at the sadya prepared on Onam, Kerala’s harvest festival, will make for a a memorable experience. 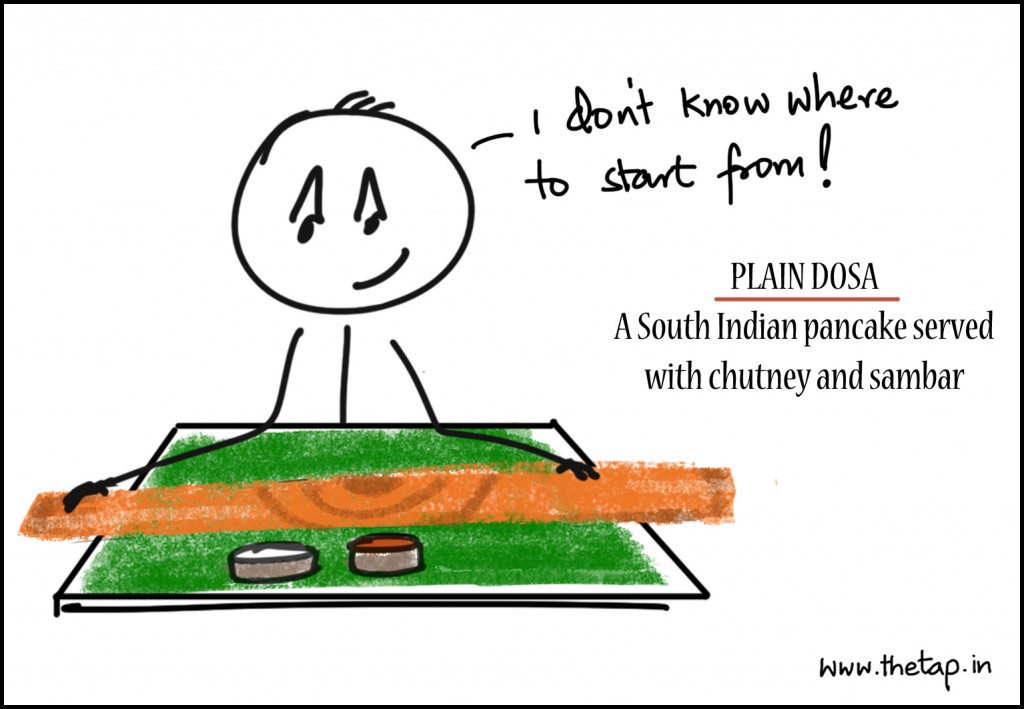 Idlis, dosas and vadas are the three things that immediately come to mind when you think of South Indian food. All three dishes are typically served with chutney (a ground paste of coconut and daals) and sambar (spicy lentil soup). Idlis are steamed rice cakes, that can melt in your mouth when made right. Dosas are pancakes made from fermented rice batter, that vary from the crispy, paper-thin kind of Tamil Nadu to Karnataka’s thicker and softer counter part. Vadas are deep-fried and doughnut-shaped, with a crispy outer layer and soft insides.  Also popularly had for breakfast in South India is pongal (steamed rice and lentils) and upma (made from semolina or rice). 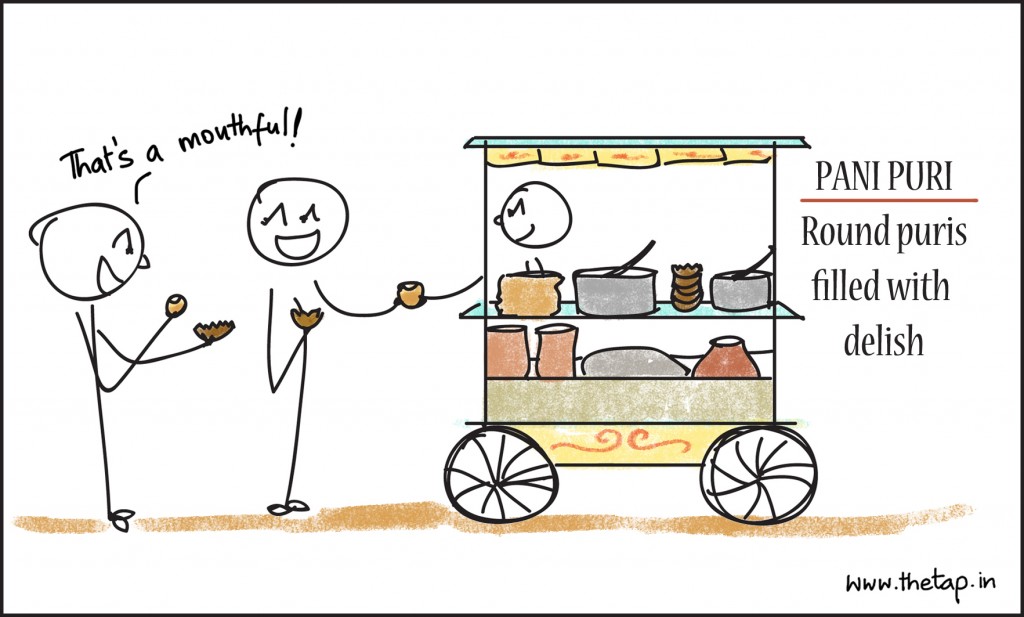 Chaat is Indian fast food – quick snacks that are served from roadside carts.  A dazzling variety of chaat is available in India, most comprising a base of fried dough accompanied by chopped onions, lemon, coriander, and masala. Pani puri (thin round puris filled chikpeas/potato, onions, and tangy mint and tamarind water) is a popular chaat item. Paav bhaji (buns with a spicy gravy), bhel puri (puffed rice with puri and masala) and dahi chaat (puri mixed with yogurt and tangy spices) form some other popular chaat items. Vada paav, famous in Bombay, comprises a fried potato patty in between two bread buns. 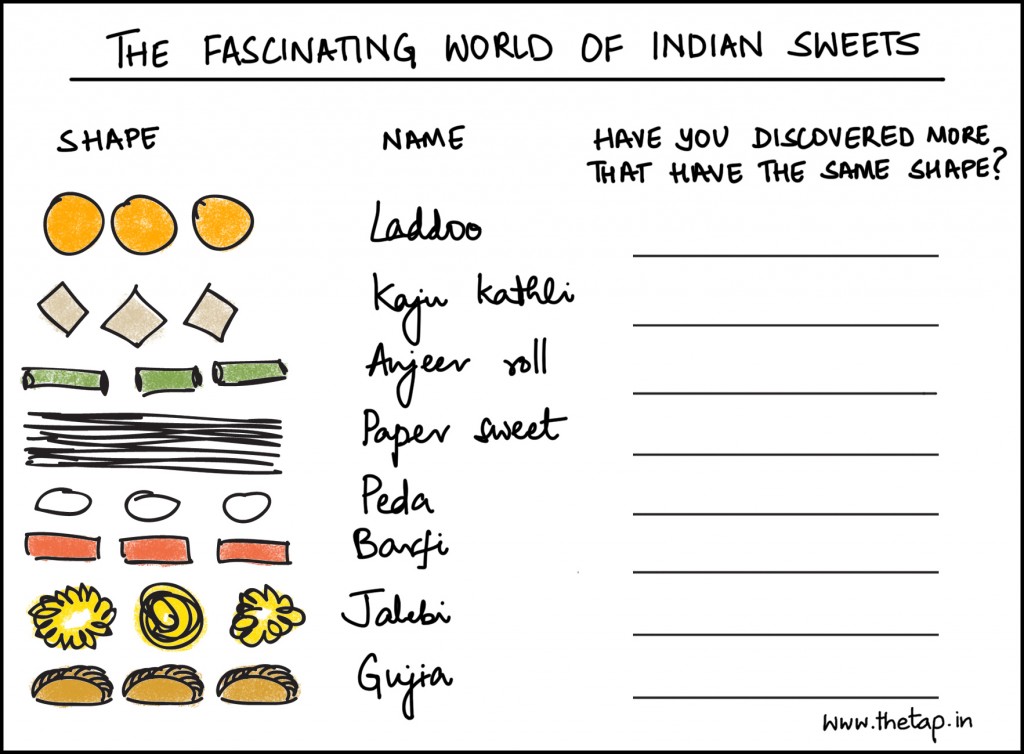 Indians are known for their sweet tooth. In most Indian households,  it is common to offer sweets (along with savouries) to guests. You will probably experience at least one incident of an Indian family asking you to tuck into some ‘mithai‘.  India boasts of a fascinating and diverse variety of sweet dishes. Laddoos (round, dry balls of sugar) and barfis (commonly made from dry fruits/gram flour) and  are found throughout the country. Kaju Kathli, the diamond-shaped flat pieces of cashewnut fudge, are a universal favourite. The gulab jamun, another noteworthy sweet dish, is made from a dough of milk solids, which is then fried and soaked in sugar syrup. The best way to enjoy Indian desserts is to not keep your calories in mind, as most of them are rich in ghee and sugar, and, of course, absolutely lip-smacking. 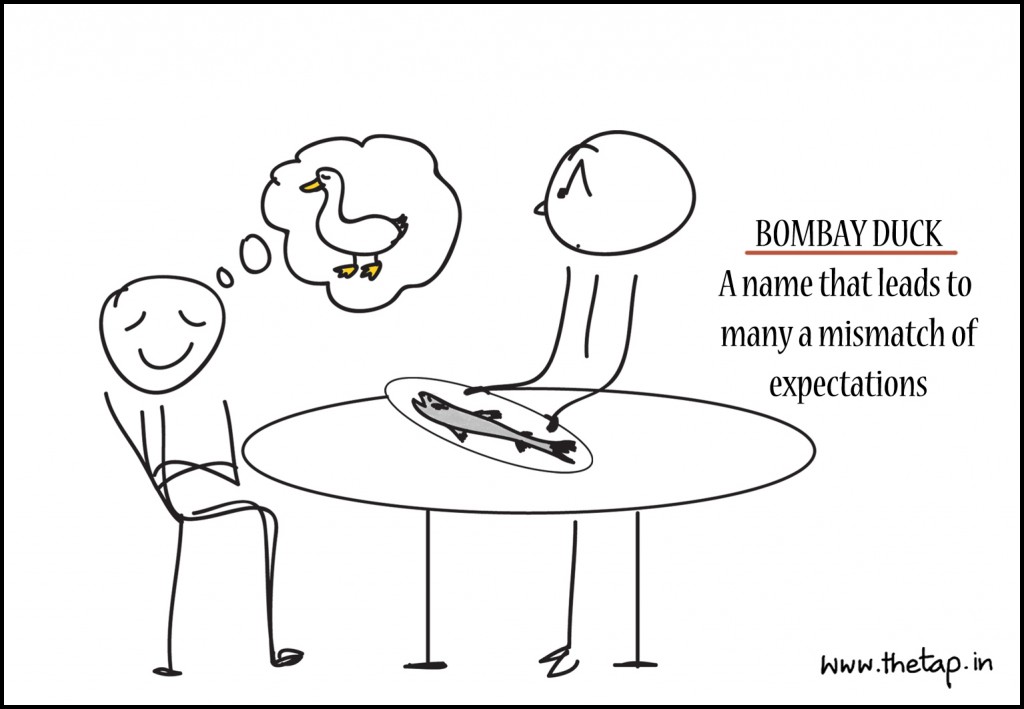 The Konkan or Malvani cuisine is specific to the region of Malvan, comprising Goa and the coastal regions of Karnataka and Maharashtra. Coconut is used liberally in all forms due to its availability. Fish forms the staple food for non-vegetarians, whereas vegetarian dishes comprise jackfruit, grains, raw mangoes, etc.  Konkan food is known to be spicy. A distinguishing spice of this region is ‘kokum’, which lends Konkan dishes their characteristic flavour.

Some famous dishes from this region are Bombay Duck (fish dry) and Kombdi Vade (chicken curry with a fluffy dough). Sol Kadi is a refreshing drink made from coconut milk and kokum. 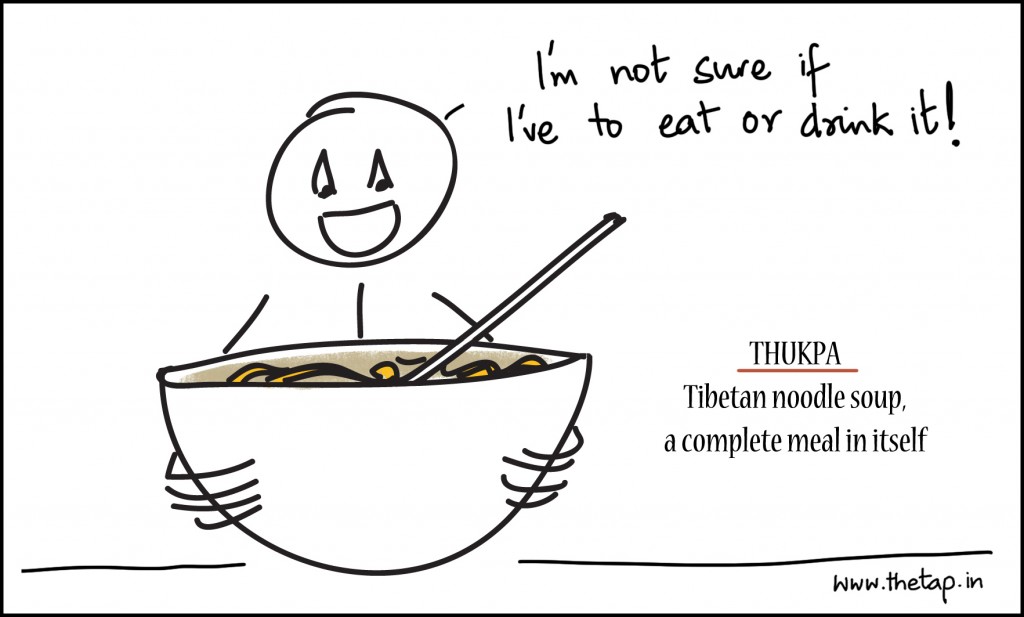 Himalayan cuisine is unique to the mountainous regions of Himachal Pradesh, Jammu and Kashmir, Uttarakhand and the North Eastern states.

Momos, now gaining popularity as a fast food in the mainland as well, are steamed dumplings found throughout the Himalayas. Usually stuffed with meat (though a vegetarian version is available in some places) and served with soya/chilli sauce, they make for a quick roadside snack.

Thukpa is a noodle soup with vegetables and/or meat, and is usually served as a full meal.

Butter tea is a unique drink made from tea leaves, yak butter and salt, and the method of drinking it is unique as well. It is served in sip-sized portions in a cup. Each sip drains the bowl empty, which is then topped up again. Tsampa is roasted (barley) flour which can be mixed with water or tea into balls, and often accompanies butter tea. 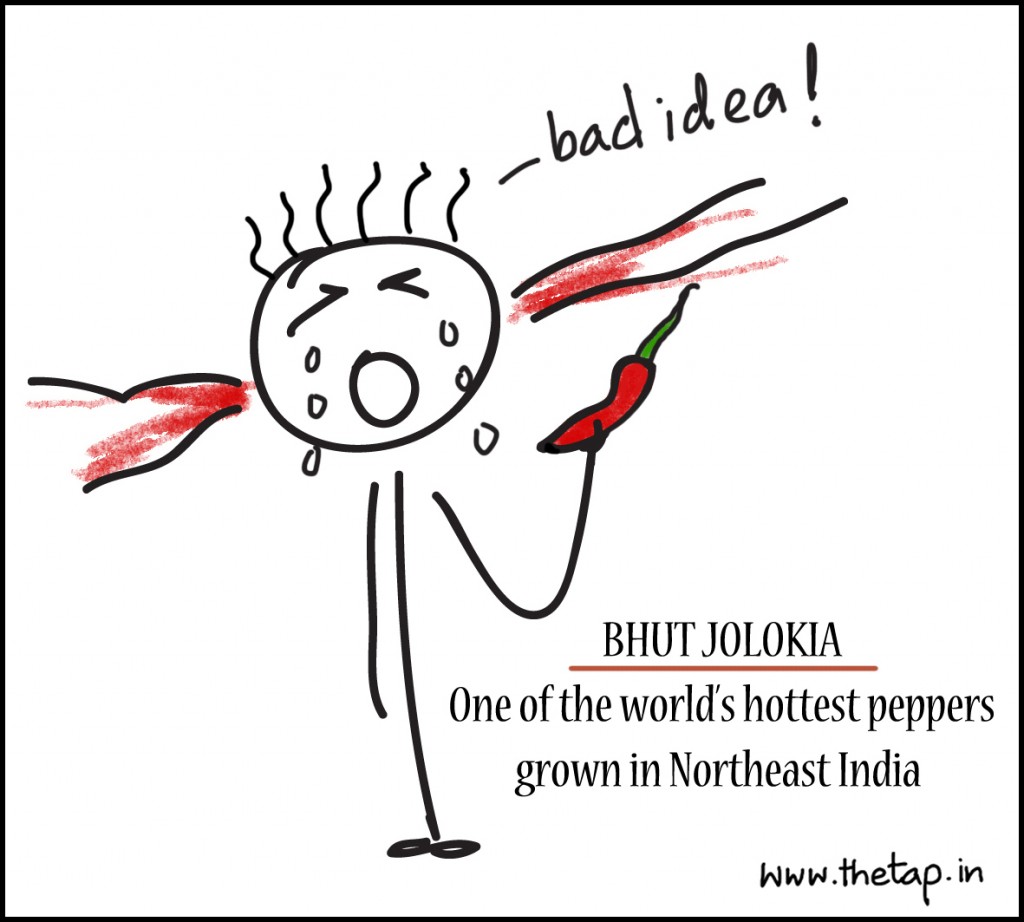 Food from the Northeast is varied and diverse, with each state having a distinct flavour of its own. Rice forms the staple grain. Assamese food comprises mainly rice and fish, with different varietities of ‘pitha‘ or rice cakes being prepared on different occasions. ‘Bhut jholokia’ or red naga chili, is a fiery pepper found in Assam, Nagaland and Manipur. Fermented and smoked meat is popular in Nagaland. Mizoram’s cuisine comprises mostly boiled food, both meat and vegetables. The pickled bamboo shoots of Meghalaya are a must-try, as is ‘jadoh‘, a dish of rice and pork. The cuisine of Arunachal Pradesh is influenced by China. Fermented bamboo shoots form a staple ingredient, and  ‘apong‘, a local rice beer,  is popularly consumed in the state. The fermented fish or ‘ngari‘ of Manipur is unique to the region. Tripura’s local cuisine, called Mui Borok, comprises fermented fish, different rice varities and meat roasts. 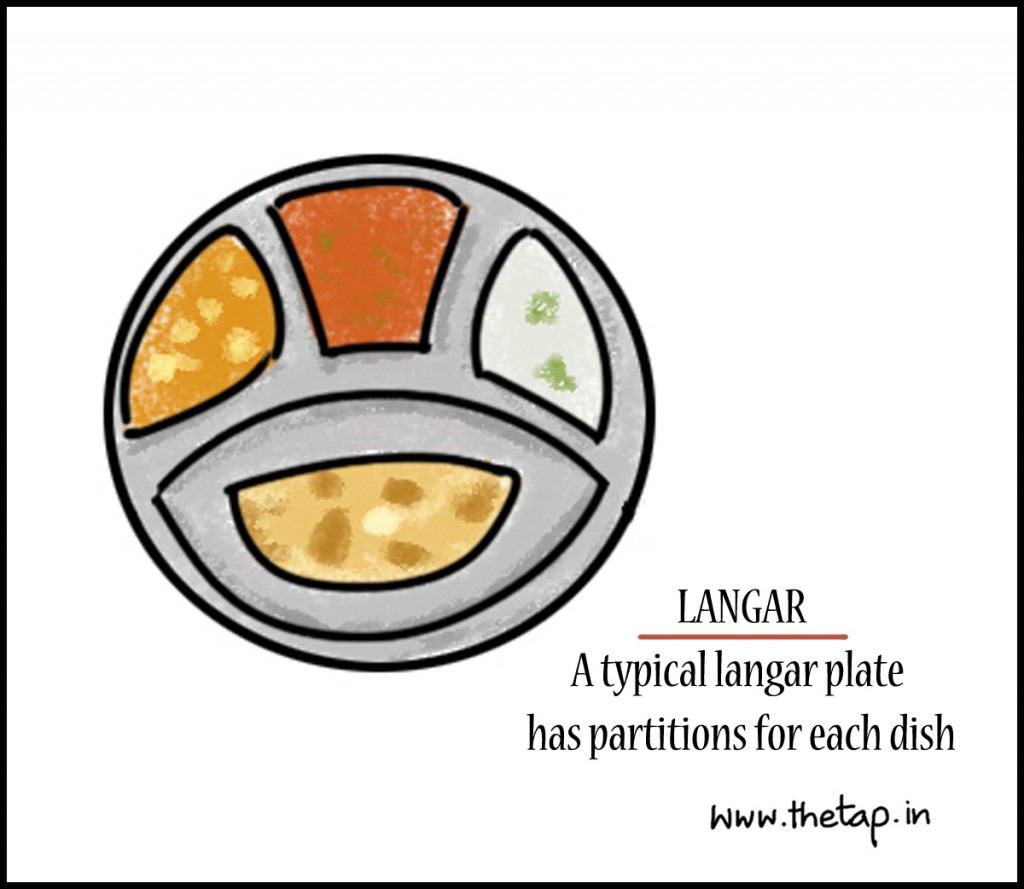 Langar is the term given to the community dining room  of a Gurudwara where food is served to all visitors, free of cost. The cooking, serving and washing is taken up by volunteers. The food is completely vegetarian and consists basically of paratha/roti, daal, vegetables and rice. The number of dishes may vary from place to place. Visitors are made to sit in rows and eat together, irrespective of their background.

All Gurudwaras, no matter how big or small, have a separate area for the langar. Some even have open-air langars where thousands of people are served food. 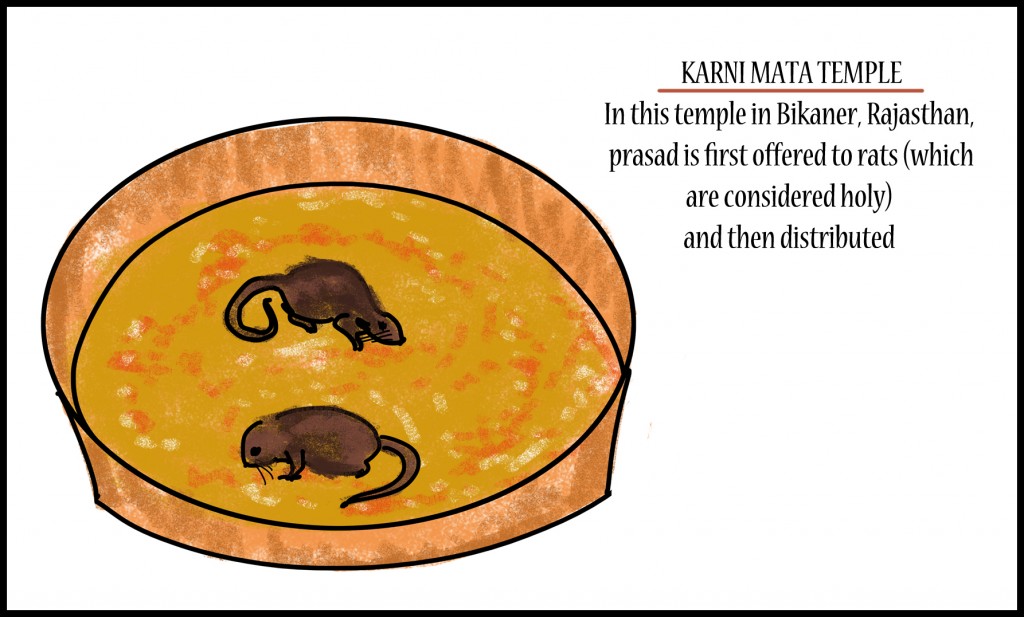 Prasad refers to the food that is given as a holy offered to a diety (most often, in a temple) and then distributed to devotees/visitors in the temple. Some popular prasad items are puffed rice, payasam (sweetened milk), laddoos, tamarind rice, puris, halwa or even pieces of rock sugar.

Tirupati Laddoo is made from besan, dry fruits and sugar. Palani’s panchamritam (made from five fruits and jaggery) is unique to the Palani temple and is highly popular. The Jagannath Temple in Puri offers ‘Mahaprasad’ – a variety of 56 cooked and uncooked dishes to its devotees. In the temples of Lord Hanuman, it is a ritual to offer ‘vadamala‘, a garland made of 108 vadas, which is hung around the diety and then distributed. In some temples in India, even alcohol is offered as part of prasad. The kind of prasad varies from place to place, diety to diety and temple to temple. 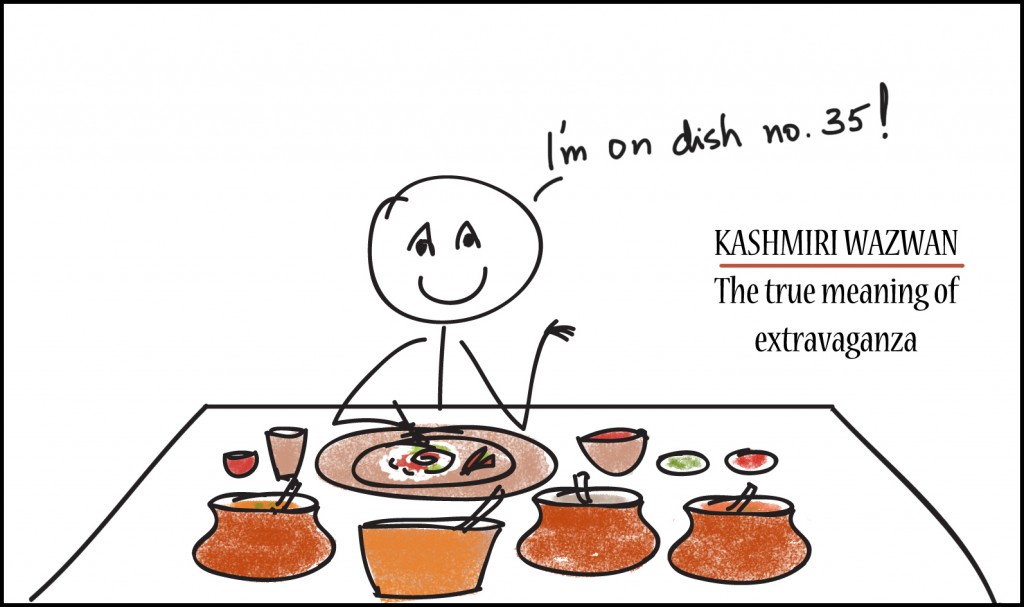 Few meals in the world are as rich and royal as the multicourse Kashmiri Wazwan (waz meaning ‘cook’ and wan meaning ‘shop’). It comprises well over a dozen and a half dishes, usually 36, most of which comprise meat. Some of the commonly prepared dishes in this meal are rogan josh (mutton pieces in rich spicy gravy), tabak maaz (fried lamb ribs), rista (meatballs in spicy gravy), aab ghost (lamb cooked in milk), methi maaz (fenugreek-flavoured minced meat), gustaba (minced meat made into balls and simmered in rich gravy), etc. Mustard oil is used for cooking, and saffron is used for flavouring. Though integral to the culture of Kashmiris, wazwan is served in various hotels in other Indian states as well.